August 01, 2018
The city took the first step today on an ambitious plan to redevelop the riverfront from the University of Rochester area through downtown and north past the High Falls area.

At a press conference at the Riverside Convention Center, Governor Andrew Cuomo announced that he has accepted plans for 13 of the projects in the city's ROC the Riverway plan. They'll be partially funded by a $50 million state grant.

An advisory board led by Chamber of Commerce President Bob Duffy and Monroe Community College President Anne Kress selected the 13 projects from more than two dozen that city officials included in ROC the Riverway.

They range from large, expensive projects like restructuring the Broad Street bridge and expanding the Convention Center and Blue Cross Arena to smaller ones like a skate park. All have the same goal: to give the public greater access to one of its prime assets: the Genesee River. 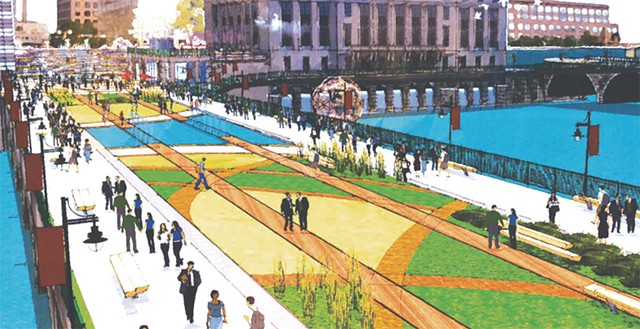 At today’s press conference, work began symbolically on one of the projects: officials broke ground on the Convention Center expansion. And officials say that work could begin on almost all of the others within the next year.

The 13 were chosen, says the mayor's chief of staff, Alex Yudelson, because the advisory board thinks they'll have the greatest impact on downtown and are likely to encourage further development along the river, both public and private.

Each of the 13 will go through the normal development approval process: meeting the city's zoning and planning requirements, for instance, and getting City Council's OK for funding.

The public will have a chance to provide input about how each is designed, Yudelson said this morning. But all of them, he said, "are actually happening."

At least one project may face some public pushback: the plan to remove Broad Street as it crosses the river – which forms a deck on top of the historic Erie Canal aqueduct –and turn the aqueduct into a pedestrian walkway. For years, there's been disagreement about plans for the aqueduct.

Some supporters of the historic structure have argued that the aqueduct should remain covered, preserving the graffiti inside it and making it available for public use. Others have wanted it restored and filled with water.

Yudelson said this morning that the advisory board heard those concerns during the public-input process on the full ROC the Riverway plan. But, he said, "the advisory board is committed" to removing Broad Street and taking the bridge back to the elevation of the original canal.

The bridge has two sets of arches, and the top set is fake, Yudelson noted. It's part of the structure that holds up the Broad Street roadway. Those arches will be removed, as will the graffiti in that part of the bridge.
The original, lower arches will remain. So will at least some of the graffiti.

"The city is committed to preserving the graffiti," Yudelson said, "whether all of it or some." Graffiti in the tunnel leading to the bridge will remain, and some of the panels removed from the bridge itself could be preserved somewhere else.

"We're committed to preserving that history and allowing that artform to live on," Yudelson said. And the city plans to make space available for new graffiti to be created, he said.

The $50 million state grant will cover design, planning, and part of the construction for the projects, says Yudelson. That won't fully pay for any of the 13 projects, so some money will come from the city, and some from private sources. But city officials are confident that ROC the Riverway’s initial investment will attract more funding, Yudelson says.

Advisory board members began meeting with a wide-ranging collection of neighborhood, community, and business groups last February to learn what people wanted to see most in the ROC the Riverway ideas. In more than two dozen meetings, what board members heard could be boiled down to two overriding concerns, Yudelson says: providing residents and tourists with much greater access to the river, and connecting downtown with the river and nearby neighborhoods.


The Aqueduct and Riverfront Promenade: Plans call for removing the Broad Street deck and closing it off to vehicle traffic. The deck would become a pedestrian bridge that can be accessed from both sides, and the Erie Canal would be fully or partially re-watered.

The advisory board considers the aqueduct the centerpiece of ROC the Riverway, but it’s structurally complex, Yudelson says. It’s the only project of the 13 where all of the funds will go to developing a highly detailed redesign.

Phase I: $4.5 million for the $60 million project, primarily for design work.

Charles Carroll Plaza: The 3 1/2 acre park on the west side of the river between Main Street and Andrews Street is severely deteriorated. But redeveloping it, city officials say, could bring the river into focus and transform downtown. The plan is to open up the park, adding green space, regrading the area down to the river level, and removing the walls that block views of the water.

Phase I: $20 million for the $28 million project that will also include improvements to Sister Cities Bridge, Crossroads Park Garage, and Crossroads Park on the east side of the river.

Blue Cross Arena: The venue greatly impacts the downtown economy, but it’s too small for many acts. And like several buildings downtown, it’s built next to the river but provides little access to it. Plans call for a major expansion of the building to add more space for events and concession areas, better views of the river, and access to a larger terrace area over the river.

Riverside Convention Center: Like the Arena, the Convention Center is vitally important to the downtown economy, but it's too small. The plan is for a 130,000-square-foot expansion that would increase exhibit space and would include a large, glass-enclosed ballroom overlooking the river. The terrace, which is currently closed, would be widened at the south end, offering views of the river.

ROC City Skate Park: The park is a public-private project to be created with Friends of the ROC City Skate Park. It would be located under the Douglass-Anthony Bridge on the east side of the river and would include a promenade, mini-ramps and ledges, and skate bowls.

Genesee Gateway Park: The underutilized park along the east side of the river between Ford Street and the Douglass-Anthony Bridge would be redeveloped to offer recreational access to the river for small, non-motorized crafts like canoes, kayaks, and rowboats.

Corn Hill Navigation: The non-profit's Mary Jemison canal tour boat was retired in 2013. Funding would add a new tour boat to the river and canal with a focus on education about the river’s history and ecology.

Rundel Library: Plans are for a redesigned terrace area that provides space for outdoor activities and seating, as well as great views of the aqueduct and the river.

Front Street Promenade: The vacant land at 84 Andrews Street, owned by RG&E, is considered a prime location along the downtown riverfront. Environmental remediation on the site has been completed, and the city envisions a promenade on the river and the opportunity for a 100,000-square-foot-building that could be used for residential and office purposes.

Pont de Rennes Bridge: The bridge spans the gorge just north of the High Falls and provides some of the best views of the falls. Plans are for structural repairs to the bridge and the addition of public art, new lighting, and plantings.

High Falls Terrace Park: Located on the east side of the gorge, the park is one of the city’s oldest and offers some of the most dramatic views of the river. Plans call for making the trail along the gorge wider and more accessible, and for clearing vegetation for better views of the gorge.

Running Track Bridge: This former railway bridge, which crosses the river north of Smith Street, needs to be repaired and stabilized. It could then serve as a pedestrian bridge connecting the Edgerton Park neighborhood with the eastside area surrounding the El Camino Trail.

Downtown Riverfront Management Entity: Board members were strongly advised by officials in other cities that have already undertaken waterfront redevelopment that a professional management and marketing team is essential. Big developments like this require a team of people trained in event and festival planning and staging, promoting activities, and maintaining safe and clean grounds throughout the year.

ROC the Riverway has been years in the making


Several administrations recognized the importance of Rochester’s waterfront areas, but this is the first administration to come up with a comprehensive plan of this scope. City officials say they're confident that this project will transform Rochester’s downtown area in the same way similar projects have in other cities.

But ROC the Riverway’s kick-start of $50 million isn’t a big number when it comes to building and development. City officials and the advisory board members envision ROC the Riverway as 15-year, multi-phase process with a total cost of $500 million.

Although both Yudelson and Duffy agree that $50 million isn’t a lot, they say it’s enough to start with, and it will encourage additional funds from public and private sources.

Duffy insists that there is plenty of investment funding available in the Rochester area. The return on that investment for the city’s economy, he said, is estimated at $2.5 billion.

A bigger concern, Duffy said, is keeping the enthusiasm and momentum going for the projects. In advisory board members' meetings with community groups, there was a lot of excitement about the 13 initial projects because they're all public-use projects, not private developments, and they'll provide more opportunities for biking, running, hiking, boating, and outdoor music and entertainment, Duffy said.

“There’s not a dog in the bunch,” he said. But he’s still concerned.

“It’s in Rochester’s DNA,” Duffy said. “We’ll meet on these projects and enthusiasm is there and then we’ll get to a point where everything just stops. That’s why we’re hoping for a couple of 'wow' projects during the next three to five years. We need excitement.”

In his travels, Duffy has watched as other cities that don’t have waterfront assets as strong as Rochester’s become reinvigorated from their projects, while Rochester has languished, he said.

“It’s not because of a lack of wealth or money,” Duffy said. “This is the time to think big and think bold.”