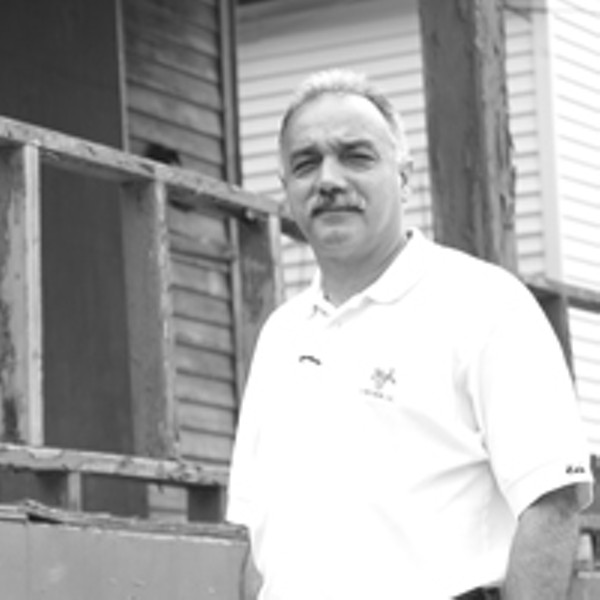 Photo by Jason Woz Superintendent Manuel Rivera: We have to find ways to overcome the barriers.

Rochester's northeast quadrant is known for many things. Children living here see more homicides and violence than children in any other Rochester neighborhood. The area is home to about 4,300 students, and more than 97 percent of them are eligible for free or reduced-cost lunches. Most of them will move to a new home at least once during the school year, and they are among the least likely to graduate from high school of any group of students in the region.

Adults in the northeast don't fare much better. With the highest rates of unemployment and illiteracy in the city, people here live on a median income of less than $9,000 a year. They have the highest hospitalization rates for asthma, diabetes, and hypertension --- and the lowest number of doctor visits.

Soon the northeast quadrant may be known for something else. If School Superintendent Manuel Rivera can convince enough community leaders, the area may become a springboard for one of the most significant programs for social change the region has ever seen. The Rochester Children's Zone, as it is being called, targets a section of the city where poverty is so embedded that it is producing afflicted children. Instead of focusing only on children, however, Rivera's strategy is to "surround" the northeast quadrant with all of the city and county resources available to address the critical needs of its residents: social services, adult education, health care, neighborhood development, housing.

Rivera agrees that the school district is responsible for education, and he says the Children's Zone isn't an attempt to delegate the district's job. "There is so much we can do with our staff in terms of more education and professional improvement," he says, "and we are doing it. We agree; there's always room to make more improvements."

"But even if we do all that," he says, "we still have to find ways to overcome some of the most difficult barriers our children face every day. They cannot learn if they have ongoing health and nutrition problems. They cannot learn to read as well as other children if they live in a household where literacy is a problem. They are not going to be emotionally stable and prepared for life if they see violence and crime."

"The 'surround care' concept means that we are making certain that we are with them 24/7, playing a positive role in their social and emotional development," he says.

The Children's Zone would cover the area from Norton Street to Main Street, and Goodman to St. Paul. It would include Schools 6, 8, 9, 22, 36, 45, and the Freddie Thomas Learning Center.

As passionate as Rivera is about the Children's Zone, he notes that the concept isn't his. The idea originated with Geoffrey Canada, president of a children's-services non-profit in Harlem. In the early 90's, Harlem was under siege from crack cocaine use, gun violence, and homelessness. Canada was seeing the area's youth on a steady path of illiteracy, violence, crime, and prison. Yes, a few of them broke out of the cycle of poverty and even made it to college. But most became adults with severe limitations, which they passed to their children.

Frustrated, Canada shifted his attention away from poor children and focused instead on the systemic problems of a poor community. He went to business, government, and community leaders throughout Manhattan to raise the money and resources for essentials: medical care, job training, and parenting skills. His goal was to see healthy babies born into stronger families.

"This represents a fundamental change in how we support children from the time they are born to the time they graduate," says Rivera. "One community gets the support of another community."

The City School District already has more than 100 partnerships with area businesses, community leaders, and colleges, including Wegmans, Via Health, M&T Bank, Nazareth, the University of Rochester, and SUNY Brockport. They're offering everything from internships and scholarships to literacy volunteers and teacher assistants. Xerox, for example, has been supporting the school district with science and robotics training since 1968.

"There are many organizations that already provide services and assistance to people living in that community, and another role we should play is one of coordinating some of those efforts," Rivera says. "We need to coordinate with other government agencies, some of which already use their own funding streams for the same goals we have --- you know, like housing and social services. Some of this simply involves making sure we are doing a better integration of efforts to support families and children."

It is 4 p.m. on a Thursday in June. The school year is winding down, but administrators are still working at a frantic pace. Rivera is trying to make it from the lobby to his office on the second floor of the district's administration building, but he is stopped about every10 feet by students, teachers, and parents. Most just want a little talk time with him, and he seems just as comfortable relating to a 5-year-old as he does to his peers. There's no question he is popular. It goes beyond that; he's well respected, and that may be his most important attribute in the months ahead.

Like Canada, Rivera understands that the success of the Children's Zone is directly linked to how well he can sell ownership of the poverty crisis beyond his own hallways. He'll have to take the schools' partnerships with the community to a whole new level.

"We have already begun the process of building community teams," he says, pointing to letters of support from people like Mayor Bill Johnson, County Executive Maggie Brooks, and United Way President Peter Carpino.

In his letter to Rivera, Jasco Tools president John "Dutch" Summers noted that 9,000 inmates who dropped out of high school were booked in the Monroe County Jail in 2003, costing the county more than $8 million to incarcerate them.

Letters of encouragement are one thing, however. Sooner or later Rivera is going to need more than just cheerleading from the outside. He's going to need money, and he's going to need a lot of it. His own estimate is somewhere between $700,000 and $1 million just to plan and launch the Children's Zone program. This money would fall outside of his annual budget, but he says he's confident he'll get it.

"We're not saying that all this change has to happen outside the district," says Jana Carlisle, chief strategist and planning officer for the school district. "We're saying we will make the changes needed internally, too, so others can work with us. This is not a mandate to them. We're going to do whatever it takes."

Carlisle is Rivera's point person for the Children's Zone. She has been immersed in graphs, charts and Power Point presentations for months. She has a 15-month window for getting community teams in place. She is also talking with residents in the northeast section of the city about the program.

By early 2006, Carlisle and Rivera will know the real backers of the Zone. They'll know who is providing what, and when to expect it. Most important, they'll know if the Rochester Children's Zone really has legs.

"I think he is going in the right direction," says United Way's Peter Carpino. "Problems like this are so big and so complicated that no one organization can solve it on its own. Everyone needs to pool their resources."

Donna Phillips is a senior associate with United Way, but before that she spent 33 years as a teacher with the Rochester school district. She is clearly an advocate of Rivera and the Children's Zone, and she has seen the problems the school district faces with poverty firsthand.

"When you think that 12 percent of the district's children live within the Zone, it gives you a sense of how big the problem is," she says. "I think the only way to break the cycle of poverty is through literacy."

Phillips and Carpino are already contributing, helping the superintendent apply for a grant. If it comes through, it would solve most of the start-up cost problem. United Way is also investing in more Student and Family Support Centers, which are located in several city high schools and offer counseling to students and parents. Carpino says the plan is to add them to elementary schools.

At the University of Rochester Medical Center, CEO Mac Evarts points to what his institution is doing in the school district: "We provide comprehensive health services at school 17, the health clinic at East High, the mobile dental clinic, a telemedicine program to elementary schools, and science lab for high school students."

"And," Evarts says, "we are committed to building on our partnership."

The Rochester Business Alliance is taking a wait-and-see approach to the Children's Zone. "We don't know if there is an immediate role for us at this time," says Sandy Parker, RBA's chief executive officer. "We understand the concept, and I think the surround-care strategy is excellent."

"We could probably support with resources, people, equipment --- it depends. But I can tell you that we would not be anxious to support with funds," she says. "I am a strong believer that we don't need to put more funds into the district."

Parker echoes concerns many business leaders have had: The district's budget has continued to increase, while drop-out rates are high and test scores are low. The district's response, of course, is that it can't work miracles with a high poverty population.

This is not the first time the city tried to take on poverty and its impact on the school district. Another big initiative came out of the Rochester Urban League back in 1986. Titled "A Call to Action," it was an initiative led by none other than Mayor Johnson, then the Urban League's CEO, and its similarity to the Children's Zone can't be overlooked. It called for community support in many of the same ways: more parent participation, involvement with health and human services, and support from local businesses. But A Call For Action didn't succeed in involving the full community. And the problems it was designed to address are worse.

"A Call to Action was more child focused," says the United Ways' Phillips. "It was not really the same thing." The Children's Zone has a more holistic approach and emphasizes supporting the entire community.

A Call to Action did boost school partnerships with the community. And if there is a lesson from the former program, it's that keeping the Children's Zone alive and in front of the public is almost as important as getting the money and resources. In Harlem, Jeffrey Canada was able to dedicate himself to his efforts. Rivera has the school district to run.

"We're going into this in a listening mode," says Carlisle. "We believe the answers are in the community. Sometimes the individual organization doesn't have the answer, but we are hoping that collectively we can structure change. We have to do something. Call it 'social engineering.' Some people don't like thinking of it that way, but we may be pioneering a new approach to education."