Rochester Institute of Technology's satellite art space, Gallery r, closed its College Avenue doors at the start of the summer, and has been replaced by City Art Space, located in the Sibley Building. Just steps from the Liberty Pole, the gallery is making excellent use of a former retail space on the first floor, and is marking an exciting trend of increased art spaces in the city's center.

The space came together quickly. It opened almost exactly one year from when organizers first looked at the space. Carpeting and drop ceilings were torn out in favor of the sparse, industrial look of cement floors and exposed ducts and pipes. Gallery lighting was installed, along with modular white walls to expand the exhibition real estate.

The new gallery's downtown location gives the creative culture of RIT a more prominent space in the center of the city, and potential for increased community programming, says director John Aäsp.

Aäsp adds that like gallery r, the new space will showcase work by faculty, students, and alumni, and it will still serve as an experiential learning hub for undergraduate and graduate students in gallery management. But it will also highlight community collaborations and the melding of social benefit with design, he says.

And RIT interior design students had a hand in the look of the space as well, Aäsp says. The students were asked to design for flexibility, and the architects used students' input to begin the design process.

City Art Space's inaugural show, "Emergence," features work by RIT professors Leonard Urso and Willie Osterman. Each have taught at the school for more than 30 years, but recently realized they had never talked with each other about their work, Aäsp says. Through subsequent conversations and studio visits, they discovered common threads in their work including mark making and visual mythologies.

The wide open space gives visitors ample room to navigate installations of large works, and the huge storefront windows allow passersby to view almost the entire show. Urso's work is monumental, whether it's fabricated metal hands and heads that bring to mind Greek or Roman ruins of gargantuan sculptures, or his large-scale paintings of obsessively scrawled words carved into paint. One such painting, "Wilderness," is a tangled patch of the word repeated and layered, like brambles resisting the order of a garden, the work looking like a punk band's album art.

Rows and stacks of Osterman's murky tintypes of masks create a feeling of an inscrutable pantheon's presence. A wide variety of expressions are captured in these portraits, from fearful to fanged and fearsome. Installed on one tall wall is a series of ambrotypes that together roughly form a body. And each panel includes a few translucent layers, giving a disorientingly dimensional effect to viewing the torso, hands, and other parts as you walk past the work.

In the early spring, the gallery will host an exhibit of work by local, national, and international artists who've taken part in WALL\THERAPY, curated by Erich Lehman. And planned for the summer is a show about new Americans, organized with the immigration office. In the fall City Art Space will once again collaborate with Rochester Contemporary and Visual Studies Workshop to present the reworked, multi-venue Rochester Biennial, which will involve select curators and potentially additional pop-up spaces. 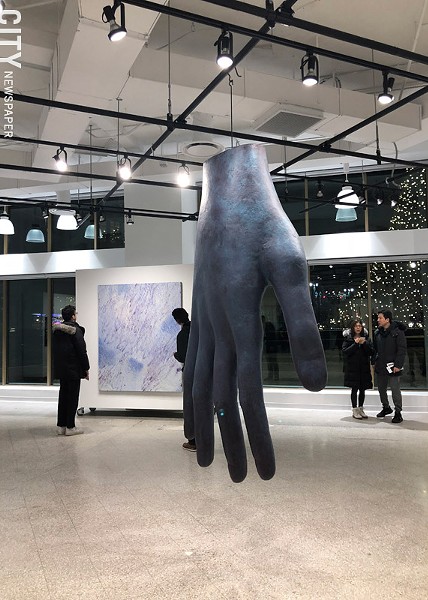