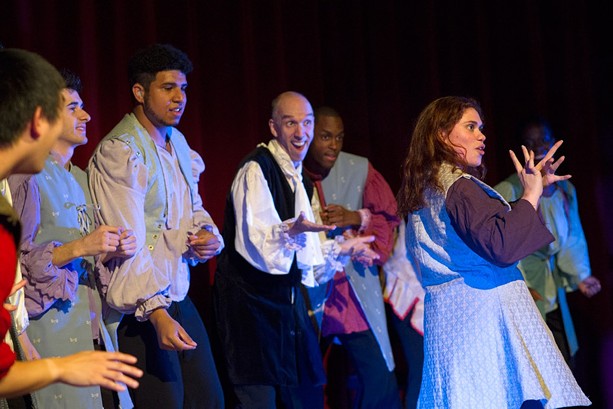 In a new collaboration, the performing arts program at RIT's National Technical Institute for the Deaf and the theater arts program of RIT's College of Liberal Arts will stage five productions next season. Each will feature a combination of deaf, hard-of-hearing, and hearing actors and dancers performing stories that tackle a variety of social and political themes. The season:

"I and You" (October 25 through October 27, in 1510 Lab Theatre)
Lauren Gunderson's story follows two students who bond over a poetry project involving Walt Whitman’s "Leaves of Grass," share secrets, and uncover a mystery.

"People of the Third Eye" (November 15 through November 17, in Panara Theatre)
Created collaboratively by the cast members, the performance looks into the lives of both contemporary and historical deaf people, through a blend of  ASL performance styles including poetry, narrative personal experiences, creative storytelling, historical reenactments, and dramatic monologues and dialogues.

"Text M for Murder" (February 28 through March 1, 2020, in 1510 Lab Theatre)
Things go badly for Tony Wendice when the murderer he's hired gets murdered and his intended victim lives. Add a secret lover, an inspector from Scotland Yard, and loads of plot twists, and the play becomes a game of cat-and-mouse to trap Tony.

"Bent" (March 27 through March 29, 2020, in Booth Black Box theater)
Set in 1934 Berlin on the eve of the Nazi incursion, the play follows Max and his lover Rudy through nightmarish persecution. The pair are recovering from a wild night with a German stormtrooper when two soldiers break into their apartment and haul them off to a death camp. Martin Sherman's 1979 play was adapted as an MGM film in 1997. Recommended for ages 12 and older.

"Dance: The Rhythm of Motion and Light" (April 17 through April 19, 2020, in Panara Theatre)
A multi-arts performance conceived and directed by Thomas Warfield that incorporates live music and choreography created from augmented reality and other technology.

Tickets are available through rittickets.com, by phone at 475-4121 or at the door two hours prior to curtain time. For more information, visit NTID's site.