Flaming Zamboni is 2020 in a nutshell, rink manager says 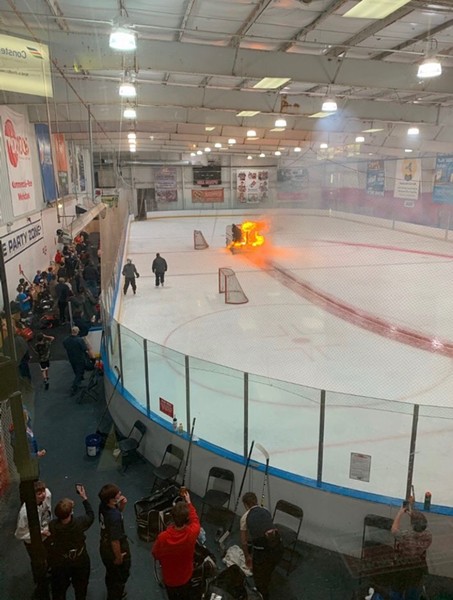 “It was quick thinking and steel nerves that saved the day,” Chris Woodworth, the ice arena’s general manager, said of the driver, Jordan Curtis, whom Woodworth described as having maintained the area’s ice surfaces for the last four years.

"Not all heroes wear capes, and in this instance, the hero just happened to be driving an ice resurfacer," Woodworth said.

Woodworth explained that a hose carrying hydraulic fluid on the Zamboni popped and the fluid, which is red, was ignited by a hot pipe underneath the machine. Video footage of the incident captured Curtis inspecting the damage from the driver’s seat and then calmly steering the machine into its docking bay at the end of the ice surface and out of sight.


In the bay, Woodworth said, Curtis extinguished the fire in seconds and no on was injured.

“The driver was in a situation where he had to make an instantaneous decision of what to do,” Woodworth said. “A lot of people in our industry have seen videos like this where the driver gets off the machine to get an extinguisher and, by the time he gets back, it’s too late.”

Ice resurfacing machines are commonly called Zambonis, after the inventor of the machine, Frank Zamboni, and his namesake company. But there are other companies that manufacture the machines and the one in question was an Olympia-brand ice resurfacer.

Multiple videos and photographs of the incident, which occurred around 7:15 p.m. on Rink 4 of the four-ice pad arena to the astonishment of spectators young and old, were posted on social media and were widely shared immediately.

For some, the stark footage of an ice resurfacing machine with flames shooting out the back followed by a trail of red skids marks and disappearing into blackness conjured images of the time-traveling DeLorean from “Back to the Future.”

“It looked much worse than it was,” said Woodworth, who described the damage to the machine as “minimal.” “The video looks horrific. You see the video and you think the thing is destroyed. Then you see the red, unfortunately, and it looks like a small child got run over.”


Woodworth said Thursday morning that Curtis was not immediately available for an interview. Curtis works in the evening, Woodworth said, and was at the arena late Wednesday.

Meanwhile, Woodworth’s phone was blowing up Thursday about the Zamboni that Curtis saved from potentially blowing up. He said he had calls from media outlets around the world.

“If there was ever a year for something like this to happen, 2020 would be it,” he said. "None of us need further reminders of how bad 2020 has been, however, we received an additional one last night inside an ice rink in Rochester, New York."