February 03, 2021
In one graceful moment, Kelly Izzo Shapiro drifts away from Joni Mitchell's "Little Green" and, using the same guitar tuning, seamlessly slides into the opening notes of her own song, "Don't Be Afraid."

The show is “You’ve Got a Friend: The Music of Carole King and James Taylor,” presented virtually starting Feb. 6 through the Louis S. Wolk JCC of Greater Rochester. The anchor of the show is King’s album, “Tapestry” — 50 years old this month, a landmark of music history celebrated by three Rochester singer-songwriters in their 30s. 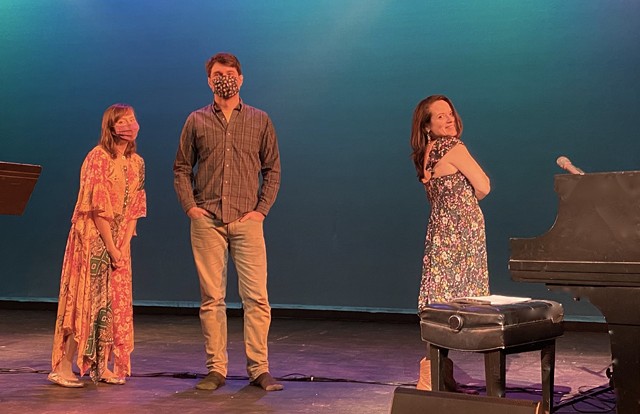 Despite the title, Carole King and James Taylor aren’t the entire story. That was merely the original idea proposed to Shapiro by Ralph Meranto, artistic director at the JCC. But Shapiro and her co-creators of the show, Sarah Eide and Jon Lewis, ran with it from there.

“Honestly, working with Sarah and Jon has been so …” Shapiro sighs… “So much what I needed during all this, this stuff.”

This stuff, of course, is the chaos of 2020. And for Shapiro, much more. In “Little Green,” Mitchell sings of “an empty space to fill in.” In “Don’t Be Afraid,” Shapiro is singing to her daughter: “Sometimes we want to stay saddened to keep us from saying goodbye.”

“Don’t Be Afraid” is about the daughter that Shapiro lost last year through miscarriage, 16 weeks into the pregnancy. Her name was Robin. So yes, the words are heartbreaking, but also healing, Shapiro says.

Shapiro draws valuable introspection from listening to the music from the Laurel Canyon scene of the early- to mid-1970s. Crosby, Stills, and Nash were there. The Byrds, The Mamas and the Papas, Neil Young, Linda Ronstadt, Gram Parsons. And King, Taylor, and Mitchell, all three of whom were recording albums in January 1971, down the hall from each other in the same Hollywood studio.

Today, Shapiro suggests, emotionally deep songwriting seems to have largely fled to the internet, waiting to be uncovered through a diligent search, as though the listener is on an archaeological dig. “Obviously the mainstream record companies are pretty much putting out, you know, dance tunes and stuff,” she says.

Laurel Canyon was different — a crucible of song, with songwriters who had “that ability to put yourself out there,” Shapiro says. “And that was valued. More than just a tune that would be catchy on the radio.”

“That’s part of what we talk about in the show,” Shapiro says. “That there was just this crucible of ideas happening. Musical ideas.”

It was quite a scene.

“Everyone was living in that area, and they knew each other and they were collaborating,” Shapiro says. “Even if they weren’t collaborating, they were hearing each other’s stuff, at parties or in studios and stuff. And I think it really drove the whole movement to become better than if they hadn’t been so isolated to that area.”

Shapiro is a crucible of ideas on her own. For a while now, she’s had a goal of writing one song a day. She left 4,000 songs in the rearview mirror a year ago, although that pace has cooled off a bit since “You’ve Got a Friend” began demanding attention.

But because some calendar-keeping authority figure has designated February as “Album Writing Month,” that’ll charge up Shapiro again. “Just try to keep that muscle warm, you know?”

Lewis is someone Shapiro kept running into at shows around town. She thinks he sounds a bit like James Taylor. The audience for his alter ego Mr. Loops, the children’s musician, may not be hip to that comparison.

In its own small way, the crucible of ideas — circa Laurel Canyon, 1975 — is at work here. “If All Rochester Wrote the Same Song,” and now “You’ve Got a Friend.”

“Sarah and I have actually started collaborating on a couple of other projects,” Shapiro says. “Like a sort of online children’s music project that we’re working on. And she’s been helping me with arrangements for a musical that I’ve been working on for a couple of years. I think, like in small pockets in Rochester, people really do connect, and then kind of vibe off each other, and influence each other, and help each other. I think that’s really cool about the scene here.

“When I was living in New York City, it didn’t feel that way, even though there were a lot more musicians in that area. It was a lot more competitive.”

As the coronavirus pandemic crept across the planet, Shapiro, Eide and Lewis began their collaboration by meeting through Zoom and Facebook. Building a playlist and the stories behind the songs.

Meranto had wanted to create smaller-scale shows “because he didn’t know what the world was going to look like,” Shapiro says. His vision was a New Year’s Eve concert, the music of King and Taylor, and a live audience. But as the show was coming together, Meranto had to adapt the show to what the world looks like now. The New Year’s Eve concert for a live audience was not a reality.

Today’s reality is the three musicians playing in a singer-in-the-round style, socially distanced on a virtual stage, as the audience watches through the internet.

King, Taylor, and Mitchell had been recording at the same time in 1971, in the same building, so it was natural that they would take the opportunity to harmonize on each others’ albums. Shapiro, Eide and Lewis take that opportunity as well in “You’ve Got a Friend.” They’ll tell the history of the songs, and how the three of them relate personally to the music. They’ve picked a few later songs by King, Taylor and Mitchell as well, to show the arc of the musicians’ development.

And then there’s the pairing of one of the Laurel Canyon songs with one of their own.

Among the more than 4,000 songs Shapiro has written are 14 that were composed for her daughter mostly during the pregnancy. Shapiro has collected them in “Robin Egg Blue,” an album she’s posted on her website. Bare-bones guitar demos that may evolve into full-blown arrangements in the future. It is the final song of the collection, “Don’t Be Afraid” that Shapiro chose to match with Mitchell’s own song of loss.

“That was honestly very hard to get through, because I haven’t played any of those songs out yet, so I was proud of myself to be able to do it,” she says.

“I wrote it the day that I miscarried. And it’s about, it’s sort of about letting go and kind of like knowing …”

Shapiro pauses. “Ah, I’m going to tear up,” she says, and does just that as she continues to share the message behind the song. “Knowing that what’s coming,” she says haltingly, “knowing that what’s coming in the future, like things are ultimately going to be OK, and everything sort of happens, you can get through the hard things. It’s basically about getting through hard things, and knowing that every experience that you have is valuable, even if it’s short.”

“Actually, my husband and I are expecting our first,” Shapiro says. “And he’s healthy right now.”