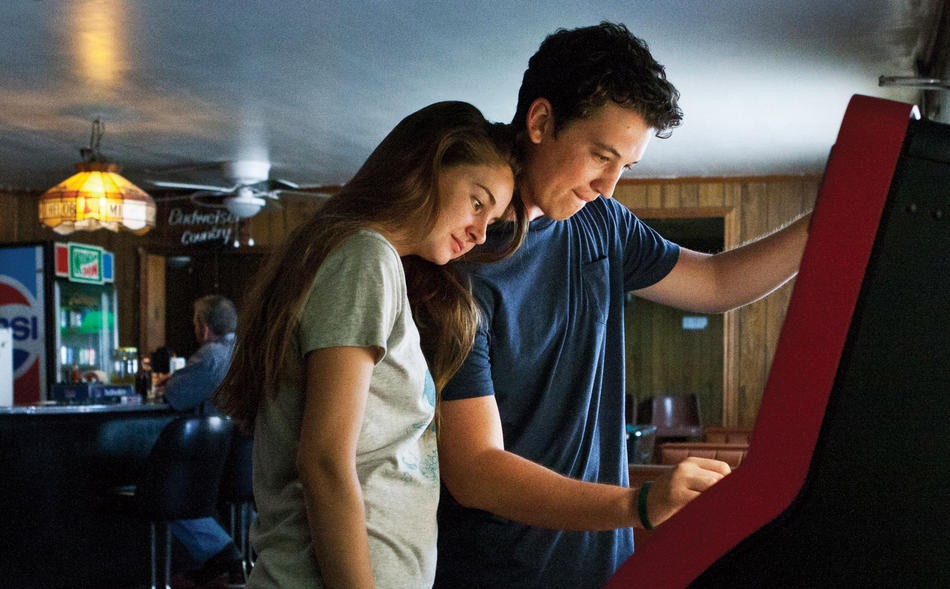 Just one month ago, in this very space, I was marveling at the number of teenage boy coming-of-age movies that have been released in theaters recently. It looks as though I spoke too soon, because here comes one more. Luckily, James Ponsoldt's "The Spectacular Now" differentiates itself from the others, offering a subtle, bittersweet take on young love and the journey toward adulthood. While the film doesn't break new ground, it avoids feeling formulaic at every turn. What it does, it does so well that it's a joy to watch.

Gregarious, popular Sutter Keely (Miles Teller, "Rabbit Hole" and "Footloose") is the type of person who lives solely in the moment. He's got charisma to spare, and an easy likability that wins people over, even as he occasionally infuriates them. It's this quality that allows him to charm himself out of most situations except, it seems, when his girlfriend Cassidy (Brie Larson) decides she's had enough and it's time for them to split up. He meets Aimee Finecky (Shailene Woodley, "The Descendants") after he goes on a bit of a bender following the break-up, and she stumbles across him while out on her paper route.

Aimee finds Sutter passed out on a stranger's lawn. He has no recollection of how he got there, or what became of his car, so she offers to drive him around to help him look. Despite their wildly different personalities, they find one another easy to talk to, and there's a clear attraction there. Aimee's smart and a little shy, but thankfully not in the stereotypical Hollywood way you would expect. She enjoys the fact that this popular boy is paying attention to her, but appears to have enough confidence to not let him change her.

Both Sutter and Aimee have close friends who warn them against entering into a relationship. Her friend thinks Sutter's going to end up breaking Aimee's heart, and Sutter's friend gives pretty much the same reason. She's never had a boyfriend; he's had many girlfriends. She's nerdy and likes reading science-fiction and manga; he likes drinking. A lot. He never seems to be without a flask in hand, and the script from Scott Neustadter and Michael H. Weber ("500 Days of Summer") is effective as it subtly makes it more and more apparent that there's a problem there. Yet somehow it manages to avoid devolving into after-school special territory. Throughout, the film skillfully finds ways to subvert expectations. It's the rare teen movie that doesn't feature a climax set at the prom.

The performances from Miles Teller (who has a young John Cusack vibe going for him) and Shailene Woodley are truly something special. They share an easy, natural chemistry and their scenes together make us feel as though we're eavesdropping on conversations between real teenagers. This realism extends to the supporting characters, portrayed beautifully in a minimal amount of screentime by a talented collection of actors. Jennifer Jason Leigh is incredibly sympathetic as Sutter's often-exasperated mother. Bob Odenkirk gets a couple touching, pivotal scenes as the owner of the men's clothing store where Sutter works, and he's miles from the sleazy character he portrays on "Breaking Bad."

Brie Larson is also fantastic in her role. In a lesser movie, her character would be the blonde bitch out to get even with the girl who snatched her man, but the screenplay is smarter than that. In many ways, it lets her character be the smartest of the bunch. She's clearly still attracted to Sutter, but conscious of the fact that he's probably bad for her.

The film's screenplay does flirt with conventionality toward the end, as it moves Sutter toward the concrete moment of clarity that's a necessity in coming-of-age stories. It's a little too on-the-nose about the ways Sutter's problems stem largely from an absentee father. We eventually meet his father, played by Kyle Chandler, after Aimee encourages Sutter to track him down. It's another case of the film, through performance and writing, making a character who could easily have fallen into cliche feel like an actual person. I also wish the script addressed the way Aimee seems to start to enable her boyfriend's drinking, but the film is based on a novel (written by Tim Tharp), and it's likely that the story loses some of those nuances in its translation to the screen.

But these are minor quibbles with a film that offers the pleasure of a simple, straightforward story, told exceedingly well.