Gravity and the garden

If you've never read Annie Dillard's magnificent 1982 essay, "Total Eclipse," I recommend adding it to your reading list. More than a reflection on her experience of being in a solar eclipse's zone of totality two years prior, the piece is her meditation on the perspective-altering event. It's a wonderfully organized presentation of the crash of associations the eclipse provoked in her, about the terrifying mechanics of the cosmos, terrestrial concerns, existentialism, and consciousness. It's a piece I return to again and again when life seems either too big or too small.

The essay again sprang to mind on the recent 50th anniversary of the Apollo 11 moon landing. I visited the George Eastman Museum to check out the current installation of photos and objects in the History of Photography Gallery, which is all about the intersecting histories of photography and space exploration. While there, I also decided to pop in to the opposite Project Gallery to view "Tanya Marcuse: "Woven."

On the face of it, the two shows couldn't be more different. The images in the moon landing exhibit track humanity's everlasting longing for the heavens. It presents more than a century of scientific and artistic attempts to document the mysterious order of the cosmos. In "Woven," Marcuse's immense photographs of layered flora and fauna — which have been compared to tapestries in appearance — are utterly absorbing wonders, concerned with all that is underfoot and entropic. 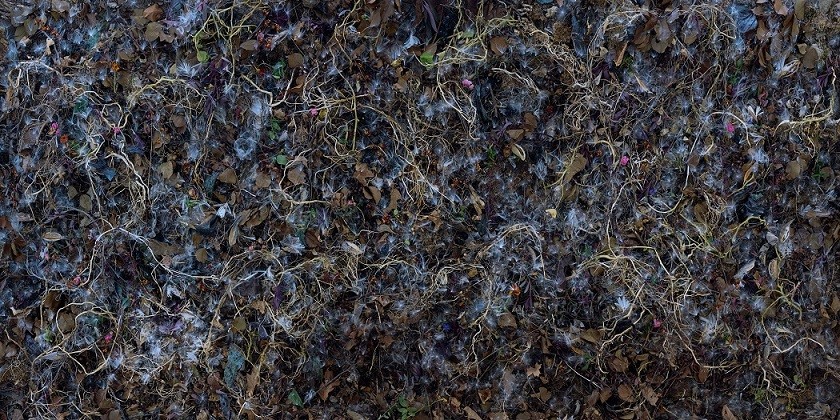 The exhibits represent order and chaos, and all of life as we know it is suspended between the two, ultimately helpless.

It's worth spending some time in each space, learning and letting your mind bask in beauty. In the History of Photography exhibit, you'll find early artistic renderings and photographic captures of the moon: reflections on human culture that are as much about shared wonder as they are about scientific inquiry and dispelling the superstition that has surrounded cosmic activities.

To me, some of the more fascinating elements include a 1826 mezzotint and engraving by Louis-Jacques-Mandé Daguerre, who worked in theatrical design before he invented the Daguerreotype in 1836. His theater work shows: the print depicts a scene of bright moonlight spilling through nighttime cloud cover into abandoned ruins, looking exactly like a stage set.

French photographer Eugène Atget's 1912 "L'Éclipse" turns the camera on people observing a space phenomenon: he's captured a crowd clustered together on a Parisian street as they witness the eclipse that happened two days after the Titanic sank, curatorial notes state.

Edward Steichen, a personal favorite, was unparalleled in creating photographic dreamscapes that could be mistaken for paintings, and he beat the Impressionists at their own aesthetic game. Included here is his watery and ethereal 1903 photogravure "Moonlight: The Pond," in which a faint lunar glow peeks through a stand of trees, all reflected on the still water.

Other points of fascination are a 1904 map of the stars — a grid with dark dots that is a sort of distant relative to the Hubble telescope's later imaging — and an actual 1967 Lunar Orbiter photographic subsystem. Eastman Kodak Company developed the apparatus to photograph both sides of the moon and help determine the best bets for landing locations.

In a way, the exhibits are macro and micro mirrors of one another. When we stare into the depth of space, we are seeing a tapestry of creation, endurance, and destruction happening all at once, side-by-side and layered. Standing before Marcuse's wide, periphery-swallowing images is like hovering above a zoomed-in view of the overlapping, unending life-and-death cycles of Earth; there's a similar level of overwhelmed detachment as when you try to take in the scope of the universe.

Made between 2015 and 2019, this set of Marcuse's photographs remind me of reading those "I Spy" books as a child, if the list of objects to check off included everything you'd find at the bottom of the garden. Layers of minutiae appear and disappear: petals, pods, honeycomb, snaking sprigs and branches, snake skin, actual snakes, fruits in various states of ripeness and rot, scattered seeds, fern fronds, moss, mold, twisted husks of lord knows what. Scraps of someone's fur, feathers, a jaw, a rib cage, bright berries, and nuts withered in their shells.

There's even a wall-mounted index for "Woven No 27," which is an even earthier version of these wide shots of seeming wilderness. Ironically, life-giving water speeds decay: a bubbling stream wets and darkens soil filled with fruiting strands of spider silk-like mycelium. I spy salamanders, caterpillars, a soaked spider web heavy with water droplets.

Heavier allusions to death follow. In "Woven No 17," the bony hooks of antlers erupt everywhere, as if sprouting from the forest floor. Brand new myths take vague form in my mind to explain what I'm seeing here.

The illusion of just stumbling upon these natural tableaus is nearly complete, but a nagging sense of artifice remains. Like a tapestry, the threads are too perfectly placed; a subtle pattern and balance can be detected where there should be none. This is most obvious in "Woven No 11," which is overrun by the wraith-like ballerina forms of milkweed seeds; pale, dried vines that flash like lightning over the rich-dark earth; and scattered pink buds glowing like distant stars.

Though Marcuse names Eden as a meditation for this work, human history is filled with various garden and grove stories, in which humanity grapples with life, sustenance, danger, and death: the Roman myth of Vertumnus and Pomona; the tangled power struggle of life and death, season and shift between Demeter and Hades, with Persephone caught in the middle. And like that tale, Marcuse's images reveal different seasons in the grove. If we were denied a haven, we created one; and today many people prefer a manicured garden to a ramble in the lush, uncurated wild, where unseen things bite and sting, where there is no path.

Both of the exhibits have accompanying audio elements. The curators of the History of Photography exhibit have created two playlists of music to supplement the experience. "Moon Moods (1800-1969)" ranges from classical to rock, of course including Claude Debussy's "Clair de lune" as well as Henry Mancini and Audrey Hepburn's "Moon River." The second playlist, "Moon Fever (1969-now)" includes moon and space themed songs by The Police, Cocteau Twins, and David Bowie, as well as NASA space recordings. And like many past exhibits in the Project Gallery, Marcuse's show is supplemented by audio recordings of her discussing certain pieces in the project, which are accessible via "cell phone tour" in the gallery or at eastman.oncell.com.