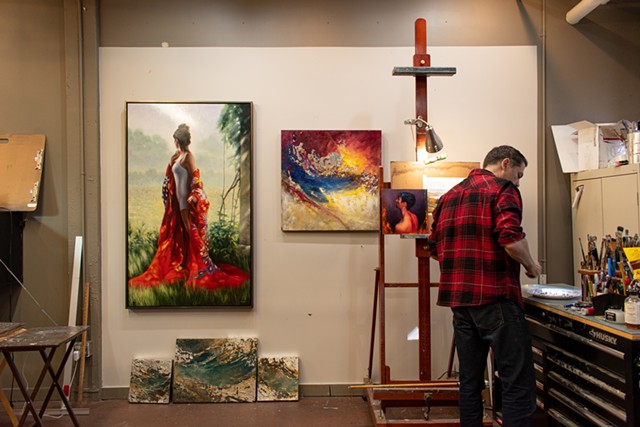 Artist and teacher Brian O’Neill has created scores of paintings in his lifetime, but just two adorn the walls of his studio in the Hungerford Building.

One is an abstract in which a kinetic wave of warm and cool colors speckled with gold and silver leaf clash like the dust of a nebula. Next to it is a hyper-realistic portrait of a woman in a red robe gazing out softly onto a lit field, her chestnut hair piled atop her head. She appears both graceful and alert, as if ready to spring into action at any moment.

Combining these two styles — abstract and realism — onto one canvas earned O’Neill second place recently in the International Guild of Realism Fall Salon Exhibition. His award-winning work, “Awakening,” depicts a woman rising from slumber, mid-stretch under a cascade of blonde tresses and peacock feather-printed bed clothes. She looks away into a dark room, and her image is framed with bits of silver leaf that glitter on the edges of the scene in a way that suggests reality is slipping away. 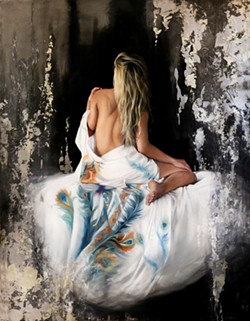 O’Neill says it took him a long time to understand that the two styles, which he says he loves equally, come from the same place in his soul.

“It's just this duality that I believe is part of my nature,” he says. “I like to be able to vacillate between both worlds. Because I just get bored easily. I start to feel confined. And I don't like feeling confined.”

Nearly all of O’Neill’s work finds its way into private collections in Rochester and around the country. One of his paintings, a 12 feet-by-8 feet work titled “Highland Park in Bloom,” graces the walls of Highland Hospital’s lobby.

And he is frequently commissioned to create some combination of portrait, landscape, and abstract work for patrons who saw his work exhibited over the years at the gallery space at the now-defunct Arts & Cultural Council, and at Rochester Picture Framing.

That was the case for Maggie Symington, who with her husband Charlie has commissioned O’Neill to make both representational and abstract paintings as well as combinations of both. Three years ago, they commissioned him to create an overcast winter scene of a stream and bare trees, all subdued blues, grays, and browns, brightened up with silver leaf.

“One of the things we love about his work is the way he incorporates the silver and gold leaf, and not just texture-wise but as composition in the painting,” Symington says. “And just the feeling of movement that he's able to achieve even in his abstract pieces.” 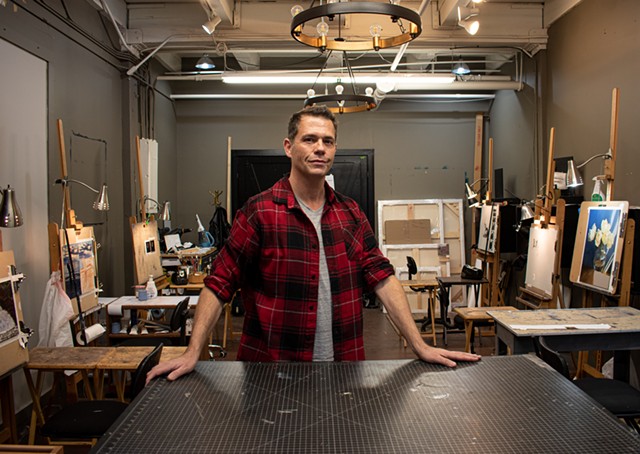 Other paintings fill O’Neill’s studio space — smaller works-in-progress on easels that stand in two lines. They are stunningly life-like depictions of the natural world: white roses, a small songbird, a cluster of ripe vegetables.

These are the works of his students, who meet with him on Tuesdays and Fridays for a highly intensive, methodical approach to painting, no matter what their skill level when they started.

He’s careful to make sure prospective students understand this isn’t a weekend workshop, but a longer commitment. 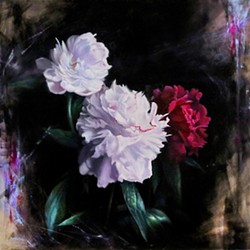 “Workshops are great,” O’Neill says, adding that he’s no stranger to them, and takes advantage of the workshops taught by master artists brought to town a few times a year by The Rochester Art Club, which is just upstairs from his studio.

“Those are wonderful. That’s immersion into something,” he says. “But this is a long-term process in a very specific technique that is meant to dismantle everything that you think you thought you knew about representational work, and you start to rewire the nervous system in your body to be hypersensitive to pressure control.”

Students begin working with charcoal or black and white pastel, learning the fundamentals of light and form. They gradually move on to color pastel, then to oil paint. The progress can take months of incremental steps forward.

“I let people know in the beginning, you need patience for this, you really do,” he says. 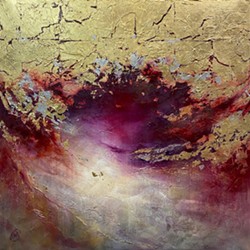 He admits that the work can seem tedious at times, but his students — some of whom are still studying with him after several years — say it works.

“I think the main thing is Brian taught me how to see,” says retired attorney Andrea Nadel, who has been a student of O’Neill’s for three and a half years. “I know that may sound funny, but it's easy when you are looking at something and you're just starting out, to feel overwhelmed.

“But the way Brian teaches is he breaks it down for you. So all you're seeing are the elements, the light, the dark, and the shape,” she went on. “That takes away the feeling of being overwhelmed by the entire piece, and you feel you can handle it.”

The approach is how O’Neill refined his own work. After showing a natural aptitude in rendering skills as a young boy in his native Long Island, he compulsively created art throughout his childhood. He was accepted into art schools, but was too anxious to attend.

He worked as a dog groomer in New York City while taking commissions doing decorative art paintings on walls inside patron’s homes. After years of hustling as an artist, he relocated to Rochester in the early 2000s with his now husband, Jim Hansen, and built a relationship with the former Nan Miller Gallery. 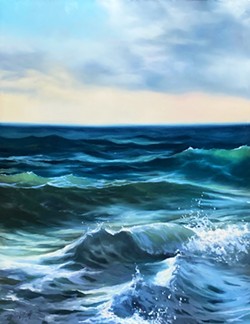 ut he believed he could take his art further.

A serendipitous Google search for “representational painting” about a dozen years ago led him to master painter Anthony Waichulis, whose studio was based in Northeastern Pennsylvania. O’Neill travelled there routinely for four years, spending days at a time to work as an apprentice to Waichulis. Seven years ago, he began teaching at the Memorial Art Gallery’s Creative Workshop before setting up his own teaching practice in The Hungerford.

Now, at 52, O’Neill has a thriving studio practice in which he paints what he wants to paint, is represented by galleries across the country, accepts commissions, and teaches other students the skills of seeing deeply and replicating what they see.
But he is quick to acknowledge that for every award, for every success, there are plenty of losses and failures.

“That doesn’t mean that your work doesn’t have value,” he says. “It just means that you go back into the studio, and you make honest work.”

Rebecca Rafferty is CITY's life editor, and can be reached at becca@rochester-citynews.com.