A few weeks remain to catch Eastman Museum's retrospective of the life and work of photographer Alvin Langdon Coburn. Three galleries full of images, as well as objects from Coburn's personal life, tell the story of a talented and intrepid young artist.

Though Coburn lived a long life (1882-1966), he produced his staggering amount of work in just the two decades he was actively creating photographs, from 1900 to 1920.

Drawn mainly from the Eastman Museum's collection, the massive retrospective includes Coburn's silvery and sepia images of New York's iconic skylines and bridges; Europe's storybook vistas; industrial Pittsburgh; the glory of the Grand Canyon, Yosemite, and California; and his portraits of cultural icons that spanned two decades. Also on display are his later experiments with vortographs — imagine a camera lens attached to a kaleidoscope — and multiple exposures.

This is in part because of his privileged background — he was born to Boston wealth, and was introduced to the world of art photography by his distant relative, Fred Holland Day, who took Coburn on as a protégé.

At the turn of the 20th Century and at the age of 18, Coburn traveled with Day to London to assist him with "The New School of American Photography," an exhibition at the Royal Photographic Society that included works by both men as well as Käsebier and Clarence H. White. Coburn later joined Stieglitz's Photo-Secession group of fine art photographers, and earned the praise of the press for his work.

The young artist collected these published accounts in a scrapbook, which is also on view in the galleries, with some of his ornate rings, decorative opium pipes, and tarot cards. These latter objects hail from his later dabblings in mysticism.

Through his short but prolific photography career, Coburn mastered photographic printing processes, and moved from his early, romantic, Pictorialist style — his 1900 "The Dumping Ground" is bare and barely tangible, and his 1904 "Sailboats" looks like a dream — to a focus on urban scenes, and later to much more avant garde, experimental imagery.

In his cityscape works, he exploited the soaring heights of city skylines in order to reveal a new perspective to the people below. "Fifth Avenue from the St. Regis," Coburn's first bird's-eye view image, is as atmospheric as his earlier work, with chains of gas lights glowing like a string of jewels, and spiny Gothic architecture seeming to shift in and out of a shroud of steam and mist.

Other scenes are grittier and just as romantic, always expressing perfectly balanced views of structures and industry, and capturing puffs of thick smoke at the most picturesque second.

His portraits, which were produced for Metropolitan Magazine and for private sitters, are expressive and often theatrical. "Auguste Rodin," created in 1906, is an imposing image of the sculptor, with a dramatic diagonal formed mostly by the subject's flowing beard, and dominated by Rodin's squinting leer.

The striking "Le Penseur (George Bernard Shaw) pictures Coburn's nude subject, posed in an intense reverie in lighting that effectively imitates the smooth, marble muscles of classical sculpture. Shaw was "famously proud of his body, conditioned by a vegetarian diet," explains the wall text, and the photograph "brought both sitter and photographer a degree of notoriety." 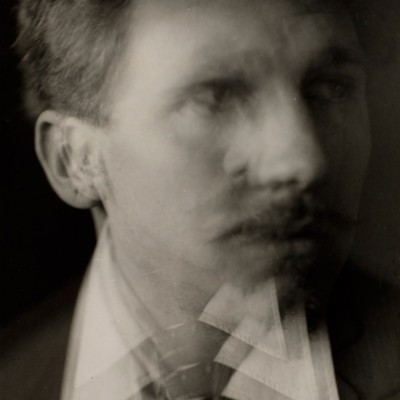 During his trips to the American West in 1911 and 1912, Coburn captured great sweeps of the unmarred marvels to be found there. Images of dizzying canyons and heavy clouds rolling overhead are tinted the characteristic reddish-brown of the environment, achieved through Coburn's mastery of gum bichromate over platinum printing process. Here, the wall text tells us that immersion in the "sublime power of nature humbled and overwhelmed him, encouraging his propensity toward mysticism."

It's little wonder that Coburn retired to the countryside and began to focus on the more spiritual side of his life — this transition from London took place in the midst of World War I, when living in a city center came with the threat of frequent bombings.

From 1916-1917, Coburn's experiments with Vortographs, using a device he co-created with Ezra Pound, yielded crystalline, abstractly fractured images which sometimes also featured portraits. In other late-career images created within this genre, but without the device, Coburn's excellent, geometry-dominated studies of modern architecture mirror the styles of Furturist and Cubist paintings.