After teaching for 38 years at Nazareth College, Lynn Duggan will retire at the end of this semester. The current exhibit at the college's Arts Center Gallery is a retrospective that spans nearly four decades of her work, and includes the elegant jewelry and sculpture Duggan is known for as a masterful metalsmith, and mixed media sculpture, collage, and drawings. The work is beautiful in form, balance, and materiality, and tackles the many unpleasant matters of human life such as sexism, violence, and mortality.

Resistance of our patriarchal system is a strong unifying theme amid the many social, health, and environmental concerns Duggan explores in her art. The patriarchy's impact manifests in imposed gender roles that Duggan argues are harmful to all people, and in the industrial destruction of the mind, body, society, and planet.

Throughout her life, Duggan has revisited the concept of the divine feminine, symbolically alluding to myths that have been buried and resurrected, or stories of feminine power that have been transmuted into a masculine identity or otherwise stifled. "I've been interested in the way that we explore the spiritual or the 'higher beings' within our own form," she says. "The stories that come out of that reflect cultural values and in turn, reinforce cultural values."

"Trial by Fire," a brooch from Duggan's "Lives of the Saints" series, contains visual allusions to Joan of Arc, to "witches" burned, and to rape and sexual abuse on all sides of wars throughout history. The trunk of the little figure's body is formed by a piece of ivory from a bracelet historically worn by Hindi women that would be broken upon the death of her husband. This component also alludes to fire, as widows were traditionally forced to join their husbands on the funeral pyre.

Much like wider culture, Duggan is continuously reducing men and women to some of their parts — the slit and the phallus; breasts and muscles — that have us so tripped up in this mortal experiment. One of her many conceptual neckpieces, "The Construction of Gender," looks like a balancing act and a puzzle with imagery of sexuality and sexual roles. "It's about fitting into this normative, stay-at-home-mom role," she says.

Similarly, the pull-toy sculpture, "Plaything," is a sarcastic reaction to this imposed role. The robot-like form wields a dinner tray, with a vacuum attached to her rear, nearly nothing in her pencil-sharpener head, and a jeweled slit up front. "She's got it all," Duggan says. "She serves you, in more ways than one." The object's tertiary colors read like a throwback to a vintage piece of furniture.

Though there is plenty of visual clapback at the treatment of women and girls, Duggan's work contains an empathetic consideration of the ways our system impacts boys and men, too. "I have four brothers and three sons, and the pressure to conform is there," she says. "If they don't conform, they are marginalized, bullied. It can be very, very nasty, and they learn very quickly, you either fit the mold, or you're not going to get anywhere. You're disempowered by refusing that."

One of the ways this is expressed is in the expectation of men to serve as combatants in unjust wars, and then forsaking them once they've returned. Duggan explores the physical and psychological toll on vets in "Casualty," a sculpture depicting the twisted remains of a returned soldier. The skeletal and hobbled form is built of bone, wood, foam, and steel carefully balanced on a lead sheet. It seems miraculous that the form is standing, which speaks of a resilience, despite the shattering grimace it has in place of a head. 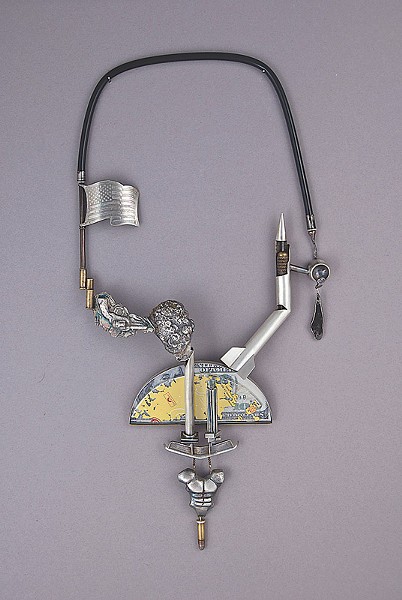 Some of Duggan's wearables seem like the Ancient Mariner's albatross: an emblem of our shitshow of shame. "Fall of the Empire" has imagery of money, weapons, and patriotism — as well as a vinyl tube filled with oil — swirling, noose-like, around the wearer's neck. Positioned like a pendent is a muscular, headless torso with a bullet for a phallus dangling below. Similarly, another neckpiece, "Circular Arguments," contains imagery of guns and American iconography, "because the discussions keep going around and around, and we don't make any progress," Duggan says.

The "dc" in "Frack u dc" refers both to America's capitol and also Dick Cheney, "because he was the one who created the Haliburton loophole so that this industry doesn't have to answer to the EPA. They don't have to tell you what's in the chemicals." A vision of trauma, with corroded metal clouds, the iconic fracking tower, and literal bone used to represent the broken earth. This necklace also has a section of vinyl tubing, here filled with a chemical cocktail not listed on the materials tag. "They don't tell me what's in their stuff, I don't tell them what's in mine," Duggan says.