"Embedding the Arts: Bringing the Arts to Where They are Needed and Revitalizing a Neighborhood"

The kick-off lecture to the 12th annual Reshaping Rochester series will introduce Rochester audiences to impactful arts programs that are transforming the city of Philadelphia. Gina Renzi, executive director of The Rotunda and the 40th Street Artist-in-Residence Program in Philadelphia, will give a talk on Wednesday, January 25, titled "Embedding the Arts: Bringing the Arts to Where They are Needed and Revitalizing a Neighborhood."

Renzi will share how West Philadelphia has been positively impacted by The Rotunda, a former church converted by the University of Pennsylvania into a performance venue, and the 40th Street Artist-in-Residence Program, which converted unused houses into studios and workshops.

The spaces are projects of The Foundation Community Arts Initiative, which evolved from a group of undergrads in an academically-based urban outreach class, the Penn Urban Studies Seminar. Renzi joined the foundation as a volunteer, and has been the director of The Rotunda for 13 years and the artist residency program for 8 years.

"The students were looking for ways to bridge the gap between the university and surrounding neighborhoods," Renzi says. "It's centered in West Philly because the university is a heavy hitter in the city, and certainly in the neighborhood."

Penn used eminent domain when the university was expanding in the 1950's and 60's, and many people were displaced, Renzi explains. "They have tried for the past 20 or 30 years, through community outreach, to address those problems and have a better face in the neighborhood, to share resources."

Renzi works for Penn, which owns a bunch of buildings in West Philly. "I animate those buildings with arts and culture, as opposed to the traditional uses of university buildings," she says. "The largest one and busiest one is The Rotunda, which is an arts and culture community venue housed in a 1911 Beaux Arts building that used to be a Christian Science Church."

The Rotunda hosts around 300 events each year, including concerts, film screenings, arts events, performances, youth-oriented events, activist events, and arts-oriented creative and business workshops. "The programming really comes from anybody -- audience members or performers can become curators -- there are few events that I plan from A to Z. It's really about other people and what they want to do." 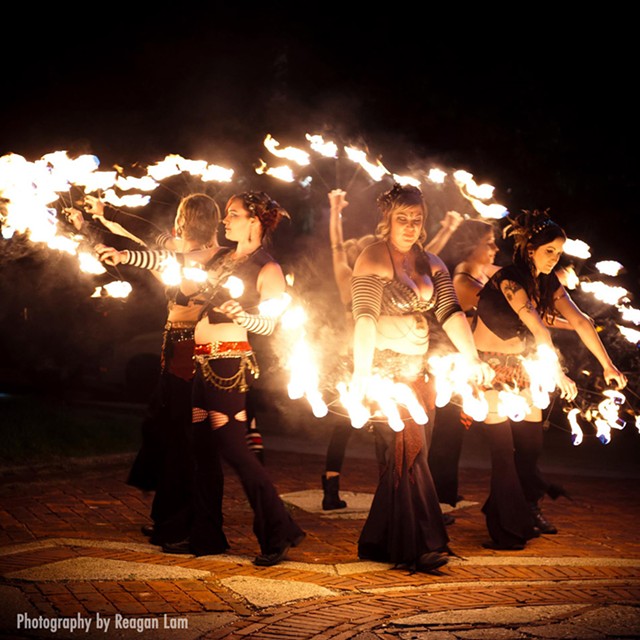 A recurring program hosted by The Rotunda is called "Sanctuary," which brings in sound artists from all over the city to design site-specific projects for the space's four-story dome. At the last event, artists mapped the ceiling using video projection, and recorded the way sound comes into the space from the street, turning it into music, she says.

The university's resources subsidize most things, from artist's fees to sound techs, so most of the events are free to the audience. This also creates jobs, with a focus on Philadelphia-based artists and arts-supporting occupations. And there is no mandate from the university for the program to put on or steer away from any kind of subject matter, even if it's controversial.

Renzi also oversees the 40th Street Artist-In-Residence Program, which is housed in two buildings a block away from The Rotunda, and serve as studio spaces and workshops for artists who live or do work in West Philly. The residency program lasts a year long, and comes with a stipend for supplies. Their work may entail going into hospitals, nursing homes, or prisons, or wherever they are needed, she says.

One of the most important effects this sort of work has is creating ways for artists and art to have an active impact in people's everyday lives, rather than just inviting the public to shows, she says.

"We know that artists in particular are really great at adapting themselves to space, and they're also very good at changing their space," says Maria Furgiuele, Interim Executive Director of Community Design Center Rochester. "In their nature, they are generally adventurous people, and they've always been known as the first wave of people to take action in a challenged community."

Renzi's work is leveraged by the University of Pennsylvania, and Furgiuele believes Rochester can learn something from this fact. "We're surrounded by academic institutions," she says. "What is the role that they might play in helping create similar programs to connect with the communities that they are surrounded by?"

This year's Reshaping Rochester program lineup was organized under the theme of "Our Cities, Ourselves; Loving Where We Live," and focuses on how average citizens can get involved and have an impact on their community. Throughout the winter and spring, the following lectures will touch on how Detroit's planning department was recently rebuilt, on urban agriculture initiatives in Brooklyn, on bringing back walkability in Washington, D.C., and on Chattanooga's river-centric model for successful downtown redevelopment.

Furgiuele has lived in Rochester for most of her life, and says she's heard a lot about all of the things that Rochester "isn't."

"It's all of the negative," she says. "So we wanted to take a different look at our city and say, 'What's good about it? What are the wonderful things about Rochester that we love?' The idea is to take ownership of our city, to make it what we want it to be."

For more than a decade, the series of lectures has brought movers and shakers from outside of Rochester to serve as inspiration, and to get some wheels turning regarding the potential of our own city.

"The committee makes a concerted effort to identify areas within the city that need attention. They look out to see who's doing what around the country, who's doing it well, and can we bring them here to share their knowledge, so that we can apply that knowledge and expertise to our community."

The Genesee River is always on their minds, Furgiuele says. "It kills me that we live in a city that has some of the most amazing water features -- I can't imagine there's any other city that has what we have here," she says, citing the waterfront on Lake Ontario, the riverfront, the waterfalls and the canal. "And yet we've kind of ignored it."

Furgiuele says that when she hosts out-of-towners, she always takes them to High Falls, and they find it unbelievable. "Oftentimes it takes outsiders to recognize assets that we have just sitting around."

Renzi's Wednesday talk will discuss the West Philly neighborhood and the programs she oversees, as well as advocating for the arts, in terms of its economic and community impact.

"I'm planning also to talk about the intentional work that somebody has to do when working in arts and culture," she says. "We're not just talking about art for art's sake, but art for social change. We're talking about ways to connect different kinds of people together, and how you really do that. I'm excited about the Q&A in particular, because I want to hear about what people in Rochester are doing."

For more information about Reshaping Rochester's 12th annual lecture series, including its May 9 luncheon, visit cdcrochester.org/reshapingrochester.html.