Renovated Theater at Innovation Square opens in time for Fringe 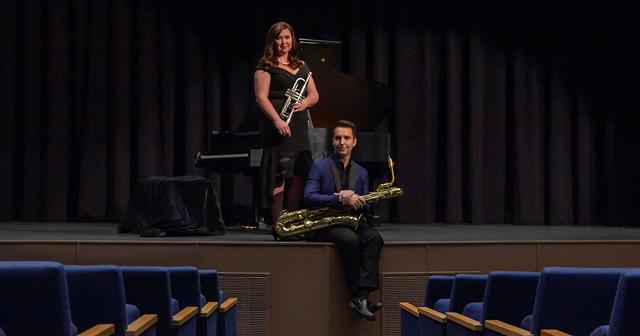 When BIODANCE takes the stage on Tuesday, Sept. 14 to present its Rochester Fringe show “Elemental Forces,” it will be the premiere performance for downtown’s brand new performing arts center.

The theater is located on a city block of connected buildings on South Clinton Ave. that includes the 30-story former Xerox Tower, which Gallina Development took ownership of in 2018. Rebranded as Innovation Square, this 2.7 acre site was repurposed to include student housing (five floors now, eventually 15 floors), 10 floors of office space, and many amenities including a fitness center, community commons, a coffee house and restaurant, classroom spaces, and joint entrepreneurial programming.

Plans for renovating the auditorium were announced in April by teacher-artist couple Natalie Fuller and Karl Stabnau, who are professional musicians and college professors, who said they wanted to give back to the arts community by leasing the space and opening a multi-disciplinary performing arts center.

“I call it the ‘Goldilocks’ theater, in that it’s not too big and not too small, but just right for most of the local arts organizations in need of a performance space,” Fuller said in a provided statement. “We are musicians and performers ourselves, so we have been able to create a model that helps local arts groups be sustainable, working within a budget while performing in a beautiful theater.”

Updates to the stage and theater infrastructure include a new sound and light system, multi-camera high-definition streaming equipment, and the addition of a box office and concessions area. The theater also has access to a parking garage that can accommodate more than 350 vehicles.

From Sept. 14 through Sept. 25, 16 Fringe acts will stage 34 performances at The Theater, including dance, spoken word, comedy, music, theater, and a circus performance. Following that, Rochester City Ballet will celebrate its return to live performances with a set of gala evenings Oct. 8-10, Innovation Jazz Orchestra will take the stage Oct. 22 and Nov. 19, Newtones Productions will present the world premiere of new musical “Susan B.” Nov. 12-14, and Garth Fagan Dance will perform Dec 3-5.