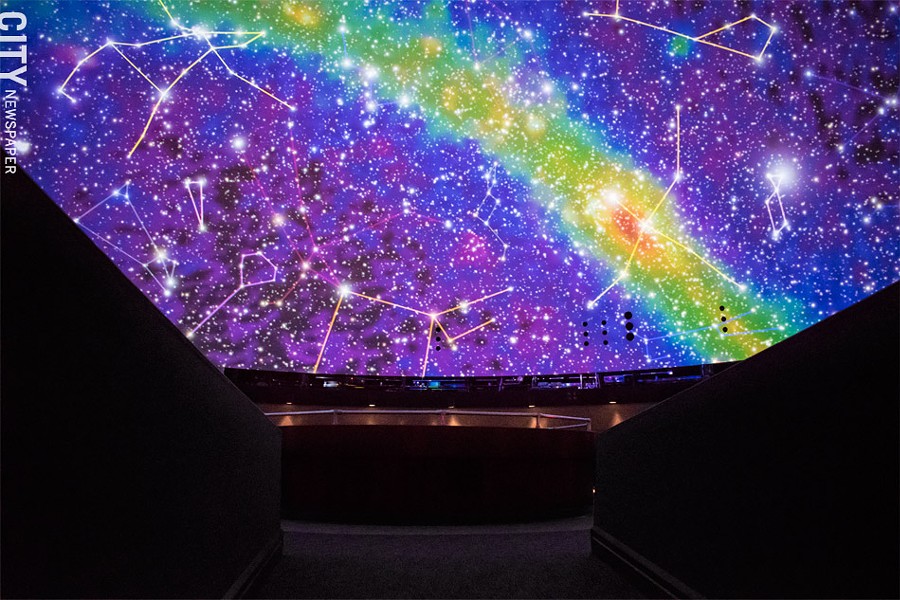 Rochesterians are in for an enhanced experience of wonder. The Rochester Museum and Science Center's Strasenburgh Planetarium has reopened after three months of renovations - the first since the building first opened in 1968. These include renovations to the lobby area; new, moveable seating in the planetarium's Star Theater; and state-of-the-art digital projection technology that will provide an incredibly immersive experience of the Earth, our solar system, and the universe beyond.

This past weekend's grand re-opening events include a presentation of the planetarium's brand new, all-ages feature, "Outer Space to Inner Space," as well as its popular program, "The Sky Tonight." There will also be be related activities in the science museum including make-and-take crafts, photo opportunities, a limited-time space-themed display, and more. The activities take place both Saturdays and Sundays, January 12, 13, 19 and 20. For more details, visit rmsc.org.

But from the mid-90's onward, other planetariums have grown by leaps and bounds, she says. "So, as we did an assessment with what we could be doing in the planetarium, what the Strasenburgh could be offering to the public, we realized that what we were offering was a little bit old, a little bit outdated, and we needed to change that."

Before now, projections on the dome were just spots of light, because "Carl" - the Carl Zeiss starball projector original to the planetarium - had lights on the inside and projected dots of light onto the dome, or the moon as a sort of larger-looking yellow dot, Olson says. 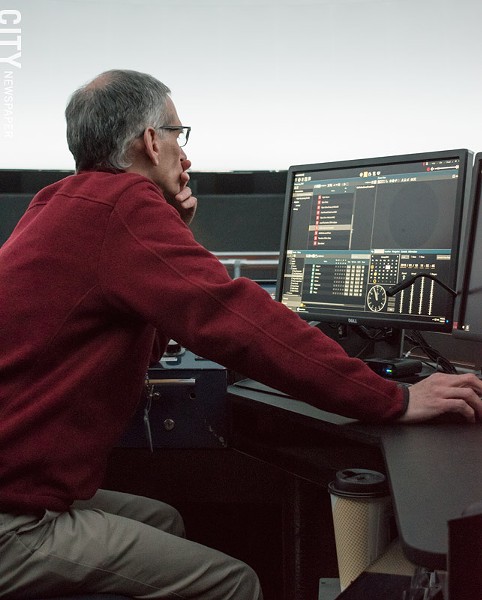 "What you're going to see when you come to see a show is not a video. It is not a movie," says Strasenburgh Planetarium director Steve Fentress. "It is a visualization of a giant supply of Big Data supplied by publicly-funded space missions and research projects from NASA, National Oceanic and Atmospheric Administration, US Geological Survey, the National Science Foundation."

A rack of computers in a small room behind the planetarium's control booth contains detailed models of all of the planets in our solar system, all of their known moons, three-dimensional locations of 100,000 stars, exoplanet systems, labels and names for all kinds of celestial bodies, and millions of galaxies outside of ours.

"What the software does is to fly through this virtual universe any place at will," Fentress says. "So it is a way of using Big Data. There's so much in there, it will take us years to explore all of it."

For example, Fentress can set the program for a specific moment in time, then zoom in to an up-close view of a planet, say, Saturn. And the correct arrangement of shadows on Saturn from its rings would be displayed on the dome above. "That's what I mean by it being a data visualization system," he says. "We could change it to some other date, and the shadows would change. We can see stars through the rings. The density of the rings is correct. Some of them block the starlight more than others."

With this level of immersion, you get a sense of the solar system and universe from different perspectives, not just from Earth.

Aside from outer-space simulations, the software can show light and other atmospheric conditions anywhere on our planet.

The system paints features - the terrain, buildings - on a topographic map of the surface of the Earth, but it doesn't have three-dimensional models of the buildings. "That's a project for somebody who wants to do it in the future, to make digital 3D models of the buildings, at least in our area, and we could add them to this," Fentress says.

And we can do this on the moon, on Mars, on Ceres, on Pluto, because those things have all been mapped in detail with publicly-supported space missions, he says.

It's a similar principle to Google Earth, and it may even use some of the same data, Fentress says. "When you go in close to a certain area on the planet, it goes out and gets the data that it needs to render that little section."


In this weekend's public show, "we will be landing in Rochester just as the 2024 solar eclipse is starting, and you'll see what that will look like in the sky," he says. The event will be Rochester's first total eclipse of the sun since 1925.

In the simulation, the atmosphere fades into an eerie, sandy darkness until the eclipse culminates, and stars are crisply visible in the darkened sky.

Even if the sky is overcast on that date, Fentress says, it will still be an impressive event to witness.

"It's not just what's happening in the sky, it's how the whole world transforms during totality that's an important part of the experience," he says. "So even if it's cloudy in Rochester it'll be a very memorable event. It's like being on another planet, except it's our planet."

During planning for renovations, a survey was conducted among staff, community members, and the visitors to the Strasenburgh, Olson says. And the consensus was that though the projection system has been upgraded to a digital format, the planetarium shouldn't retire the beloved starball projector, "Carl." 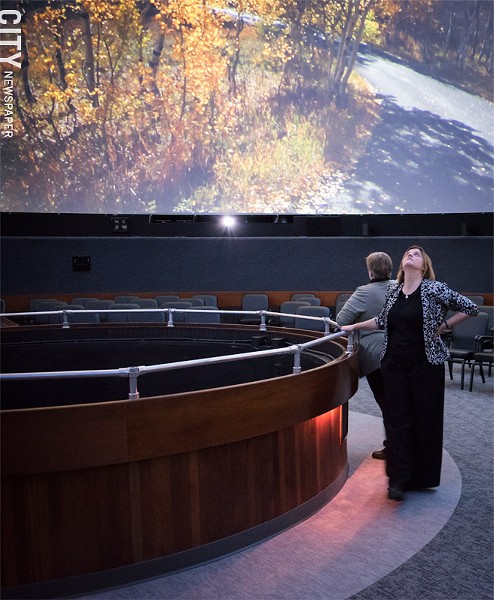 "Carl will be coming out at the end of every show," Olson says. "It's a nice comparison to see between what the Digistar program can do digitally and what Carl can do. Carl's a little dimmer, he's a little old, he's 50. But he's still active and he'll be part of every single show that we do. And we will have that monthly Stars with Carl program," beginning in February.

Peeking inside the dome theater's control booth, you see a combination of old, complex switchboards, which control Carl, and the new Digistar projection tech, which is just two computers.

The museum and planetarium staff are thinking beyond immersive star projections. The new digital technology is not a planetarium-only tool; this becomes a tool for art, for science, it becomes a tool to project anything in your imagination onto this dome, Olson says.

"So we use it to project stars and to tell a story of astronomy and discovery, but what we can use it for is to show other things," she says. "You could be under the ocean and have whales going by. You could be at the top of Mt. Everest. You could be watching a movie in here. Anything is possible. You could have a dance troupe do something where the minute you put your arms up and you throw something, fireworks go all the way up. It just has to be timed. This space can become a venue. It can become anything anyone needs it to be."

For the past several weeks, the staff has been watching the introductory show from various seats all around the room, Fentress says, "because we want them to all be equally good. So in designing the shows, we want to move things around so everybody, no matter where they're sitting, has something good to look at."

There were 225 seats before, but the number has diminished with renovations. "In my estimation about 42 seats were 'bad' either because of bad view or bad accessibility," Fentress says. "So now we can have a more spacious layout, wider aisles, and people who use wheelchairs or other assistive technology — it's easy to have them go to a first class location, there's no more 'we'll squeeze you in here in the handicap area.'"

There will also be opportunities for students and other creators to test their creations on the dome during what the staff are calling Dome Lab sessions. The sessions will happen maybe one evening per month, when there's no programming happening, Fentress says. Some partnerships the staff has considered include the MAGIC Center, the Laser Lab, the Institute of Optics, Fringe Festival, and a few art ensembles in Rochester "who have delivered the goods before," he says.

That program is set to kick off in the spring

The lobby area will now serve as an event venue, for weddings and receptions, corporate events, bar or bat mitzvahs, or other parties, Olson says. An old, unused utility closet has been converted into a bar for serving beverages and refreshments during special events.

"The internal upgrade and the upgrade of the event space in the lobby is our phase one," Olson says. "Part of that process is to renew some of the exhibits, making them more interactive, and renew them here in the planetarium and in the museum, so that everything can be hands-on, interactive, and meld with each other."

The staff wants the planetarium "to be something people are proud to come to because of what it is in the present, not just because of what they remember from third grade," Fentress says.