PHOTO Courtesy of the artist and Benrubi Gallery Richard Renaldi's photograph, "07:35" (pictured), and others in his "Manhattan Sunday" exhibit at Eastman Museum are titled for the time of morning the images were taken.

Photographer Richard Renaldi's new body of work, "Manhattan Sunday," which opened at George Eastman Museum on Friday, straddles the lines between portraiture, street photography, and still life. Featuring photographs made on eerily empty Manhattan streets in the wee hours after the clubs let out, the work also captures the blurred lines between nightlife and daybreak, private and public lives, strangers and community, and the spectrum of gender identities.

Renaldi began this project in 2010 with the idea to capture "that moment of leaving the after-hours clubs, leaving the energy and the intensity and the crowd, and coming out into the early morning light of Manhattan when the city was just completely still," he says. "Most of the time, New York City is crazy, especially Midtown, where most of the clubs are. Sunday morning is this one time when it's really quiet."

The pictures are uncaptioned aside from the time of morning they were taken, between midnight and 10 a.m. They are gritty and beautiful explorations of nature and artifice. Calming shades of gray give shape to bodies and bricks, illuminated by the weak early morning and punctuated by grids of lit windows, lines of tiny bulbs, and dazzling neons.

With this surreal serenity as his inspiration, Renaldi's images picture people in the space between revelry and going home, framed within the emptied cityscapes. At 09:51, a suited man strolls with a far-away look, a cigarette in one hand and dangling a pair of black pumps from the other. Outside of a club at 07:19, a pair of men casually lean against a barricade with arms linked. Alongside them, Renaldi has also captured early morning workers sweeping and spraying the evening's debris from sidewalks.

"It's a little more melancholic than what you experience in the clubs," Renaldi says. It's after the high; it's not a comedown per se, but more tranquility. And to see the city that tranquil is very magical and special."

There is evidence of this mood on the faces of Renaldi's subjects, who embrace one another with a looks of tired contentment, or pose for the camera with a little leftover sass. At 06:50, a bare-chested young man in tight black pants and stilettos stands in the middle of the street. Glancing back over one shoulder, he looks every bit like a faun who has wandered from the meadow of an idyllic painting into a modern cityscape.

Implied in Renaldi's work is the change in tenor that he witnessed in the nightclubs during the AIDS epidemic, and again as treatments for the disease became widely available.

"When I first came to New York in the 90's, it was the epicenter of AIDS," he says. "Nightlife had gone from being pretty much anything goes and totally wild to this mortal dread."

The scene shifted from overtly sexual to become more creative, Renaldi says. "A lot of the drag that came up in the 90's came out of those mid-80's East Village clubs, where RuPaul and Candis Cayne and Lady Bunny, and other performers got their start."

But as protease inhibitors came out and people stopped dying en masse, things became more relaxed and sexualized again. Today, there are HIV prevention pills. "Now the nightclubs are pretty unencumbered and very sexualized," Renaldi says. Things have shifted back toward the original tone, but those other eras informed the expressions in fashion and demeanor that we see now, he says. While some of his subjects favor sporty street clothes, many are masked with all manner of glamor.

Renaldi calls "Manhattan Sunday" an homage to the place he's spent decades of his life, and a cross-section of his experiences as a photographer and his experiences as a club-goer. He says both going out and his photographic work is about seeking connection, and that his portraiture in particular is a result of the desire to be able to continuously gaze at people. 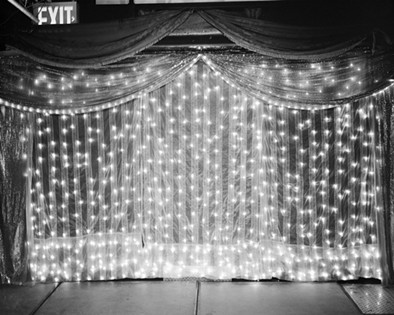 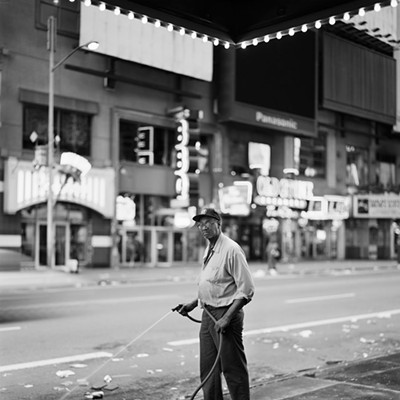 "I've always been a hard starer, and it used to freak my friends out," he says with a laugh. "Photography became this way to continue to do that, but in a more legitimate and constructive way."

And though many come off as candid, they're not — he uses an unsubtle 8x10-inch view camera, which is a big box on a tripod with accordion bellows and a black cloth.

But he says that photography has also kept him grounded. "And with nightclubs, if you don't have a strong foundation, there is a strong potential to get carried away," he says.

Accompanying the exhibit is a cell phone tour, through which visitors can learn more about select images, as well as a Spotify playlist of dance music Renaldi made to supplement the show and serve as a metaphor for what he does with his photography.

"Contemporary DJs frequently sample music from old songs," Renaldi says. "I feel that all art forms are borrowing from what's been done before. I'm not breaking new ground by making a portrait of a human being, but I'm taking what I've learned from other photographers and what's inside myself, mixing it together and making something new."