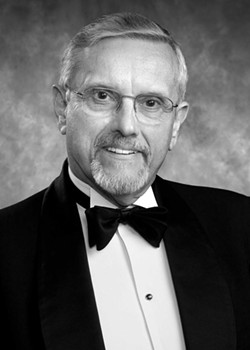 Rochester is a choir-rich town, and many singers are mourning the death of one of its most influential leaders — Roger Wilhelm, who died Sunday, Oct. 3, at 84.

In 1986, when he took over as the second director in ROS's history of that large community choir, he became a kind of statesman in the choral world. He commissioned new music from composers such as Jeff Tyzik. He helped galvanize local vocal ensembles into a strong coalition, The Greater Rochester Choral Consortium.

A friend to composers and other directors, Wilhelm had a special gift for encouraging and elevating those around him. His easy-going manner, organizational skills, and attention to detail meant things got done.

ROS's Artistic Director Eric Townell said that the conductor's legacy lives on not only in the works he commissioned, but in a grant program he created at the Greater Rochester Choral Consortium that provides seed money for choirs trying to do interesting and novel things they wouldn’t otherwise undertake.

Wilhelm, a Buffalo native, was educated at Northwestern University, the University of California at Berkeley, and at Stanford University, where he received his doctoral degree in music. He taught at Kendall College, at the University of North Dakota, and at the University of Rochester and Eastman School of Music. Wilhelm also published several editions of early-17th-century choral music and edited the first performing edition of Mozart’s "Regina Coeli," K108.

He championed new work as well, commissioning a major oratorio from composer Cary Ratcliff, "The Ode to Common Things," which he conducted at its premiere in 1996. In 2008, the ROS — under the direction Wilhelm's successor, Eric Townell — sang portions of the oratorio at a choral festival in Beijing, China. A commercial recording of the work was subsequently nominated for a Grammy award.

Over his long career, Wilhelm also transformed the small ensemble Madrigalia, turning a relatively loose group of talented singers into a nationally-known chamber choir through its first recordings. Tenor Dan McInerney, who sang under Wilhelm in a number of groups, said the conductor was very regimented and analytical in his way of approaching music.

In 1996 Wilhelm was named  “Musician of the Year” by the Rochester Alumni Chapter of Mu Phi Epsilon, an international professional music fraternity. In 2008 he received a Lifetime Achievement Award from the Arts & Cultural Council for Greater Rochester.

Roger Wilhelm is survived by his wife Beth, their family and friends, and countless singers whose lives were enriched by his passion for choral music.