Head down a chunky gravel driveway off East River Road in Henrietta, and behind a white farmhouse the Remelt family farm comes into view.

The fields there produce a variety of crops, Christmas trees, and enough electricity to power roughly 1,000 homes, generated by thousands of solar panels arranged in rows and pointed skyward. This summer, the Remelts tried out a new crop: your everyday chrysanthemums, or mums for short.

There’s nothing particularly remarkable about a farm growing common decorative flowers, but the Remelts aren’t growing them in the traditional way, which would be in a greenhouse or outdoors at a nursery. Instead, they’re raising mums in a row between two banks of solar panels — making agricultural use of idle land that so many farmers who have reserved acreage for lucrative solar farms might have written off as unusable.

“Using farmland to put solar panels on is absolutely a fantastic resource,” said Parker Remelt, whose parents, Charlie and Sarah, own the farm, and who has taken on the cultivation of the mums as a pet project.

He spoke while looking over the mums on a blistering day. Half of the plants, which were being raised in nursery pots, were shaded by the panels next to them, while the other half sat in the sun. 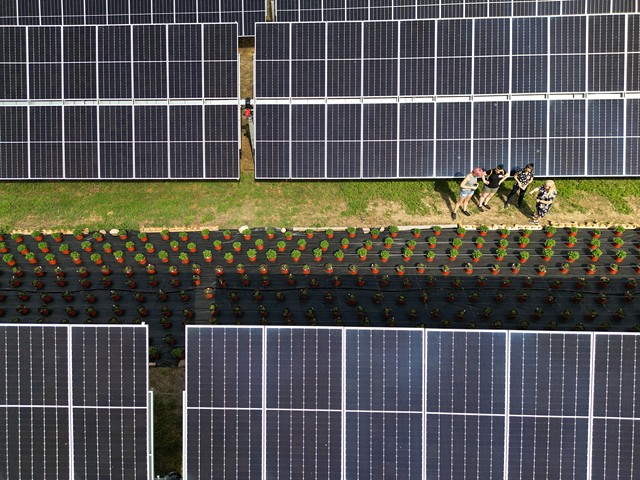 Parker explained how he and his father, when considering how to use the land occupied by the solar panels, settled on planting mums. They needed a crop that wouldn’t interfere with the operation of the panels, a qualification the mums met. As a bonus, the perennial flower also tends to be hardier when grown outdoors.
Planting mums also enabled the Remelts to build on their existing relationship with Chase’s Greenhouses in Rush, which sold them the mums and advised them on raising them.

“The mums are a good in-between for us to kind of bridge into this,” Parker said.

For the last decade or so, solar power has been growing rapidly in New York and across the United States, driven by public demand for inexpensive clean energy and government policies aimed at promoting development of solar farms. Many of the largest facilities have been built on large plots of previously unused farmland that the project developers either bought or leased.

But as more solar arrays have been erected, they’ve become increasingly controversial, with critics citing everything from aesthetic concerns to skepticism that solar farms actually do good. Often, opponents cite the loss of farmland as their top worry.

For instance, when state utility regulators recently reviewed an application for a solar farm in Byron, Genesee County, that would span over 3,000 acres of farmland, they received several written comments expressing alarm at the potential loss of agricultural land.

One of the concerns came from the operator of a large dairy farm in the town who warned regulators that the solar project could lead to a loss of adjacent land on which it could grow forage crops and spread manure.

A group of residents also complained that the project would consume 1,500 to 2,000 acres of productive farmland. In April, state utilities regulators approved the application. 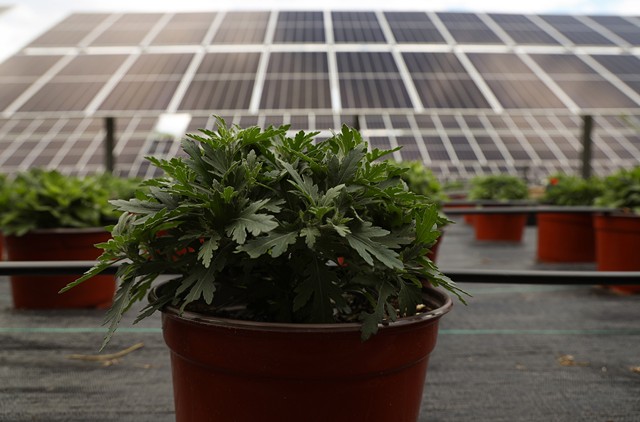 Max Zhang, a mechanical engineering professor at Cornell University and faculty director of the Cornell Atkinson Center for Sustainability, said that when possible, solar projects should not be sited on productive farmland, which have high yields and are valuable for food production. But, he added, that doesn’t mean all farmland should be off limits.

“There’s marginal land, land that’s not been particularly productive and especially has not been used for a long time, or a farmer cannot make the economics work by agricultural activities,” Zhang said. “I think for those lands, it’s a reasonable option to think about whether we can open them up for energy production.”

The plot the Remelts leased to Delaware River Solar, the array’s developer and owner, could be considered marginal land. It was used for crops and Christmas trees in the past but at 25 acres, the site is small compared to modern farm fields, and it may not be cost-effective to use as traditionally farmed cropland.

Charlie Remelt, who is the fourth generation of his family to work the land, doesn’t like the idea of losing farmland either. But that’s what’s been happening in Henrietta, which in recent years was one of the county’s fastest growing communities. Much of those subdivisions were built on former farmland, as farmers found developers willing to pay good money for their property.

But it’s not just the money that puts pressure on farmers to sell their land. When residential or commercial growth happens around them, it can make access to fields more difficult and neighbors might start to complain about fundamental agricultural activities such as slow-moving tractors on roads or plowing, which can kick up dust.

Since the 1950s, Henrietta has lost well over 12,000 acres of farmland to development, leaving around 2,900 acres of productive land that’s farmed, according to the town’s 2018 Agricultural and Farmland Protection Plan.

“Bit by bit everything is being gobbled up to housing and stuff like that,” said Charlie, who is also a battalion chief for the Henrietta Fire Department. “We were looking for a use for the land that would preserve it as open space and provide some benefit to everybody.”

Many farmers, the Remelts included, have leased land to solar companies as a way to bring in revenue. Farming is often an economically precarious business and the additional, steady income generated through those leases can help keep the enterprises viable and prevent them from selling the land for residential or commercial development.

Delaware River Solar leases one-quarter of the 100 acres the Remelts own and its panels provide clean energy to the farm’s neighbors through a community solar program. The remaining acreage is still actively cultivated.

Nationwide, some solar farms coexist with agricultural activities, but the practice of combining the two is not yet widespread, said Cornell’s Zhang.

“Solar grazing” is the most widely-adopted agricultural activity used on solar farms, according to Zhang. That’s where a solar farm owner hires a farmer to dispatch livestock, generally sheep, to graze on the grass, clover, and other vegetation growing underneath and between the panels. The approach is cheaper than paying someone to mow around the panels. It is also environmentally preferable, since it eliminates the need to use fossil-fuel-powered equipment to maintain the greenery. 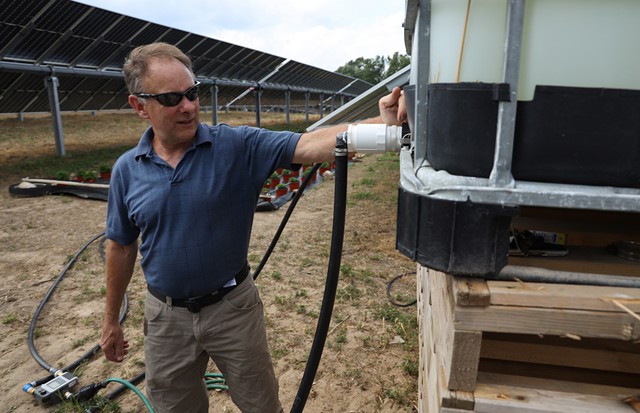 But the Remelts are raising a horticultural crop under the panels at their farm, something they are approaching as a test project. That’s a more experimental use of the empty land under and around the arrays, Zhang said, adding that such tests are necessary to figure what crops, if any, can flourish while co-existing with the panels.

“Basically, the bottom-line question is if you’re growing something under a solar panel or solar farm, will it make economic sense?” Zhang said. “As a hobby, you can do anything you want, but if we want to promote this as a practice, a best practice, it’s got to make economic sense, right? That’s one of the challenges here.”

That’s the equation the Remelts are working through. Parker and Charlie Remelt plan to sell the mums they raise to landscapers and retailers in the area. The questions are whether the plants will grow well enough to be sellable and whether the revenue from them will exceed the costs of raising them.

If the gambit goes well, the family is likely to try cultivating more crops, using more of the solar farm footprint. Charlie said nursery plants that can be grown in containers would be likely candidates.

Parker, who with his fiancée Allison Bergamo is building a house across from the farm, said that landscapers his family works with have committed to buying several hundred of the plants this year. Some, he said, have shown interest in buying several thousand in the future.