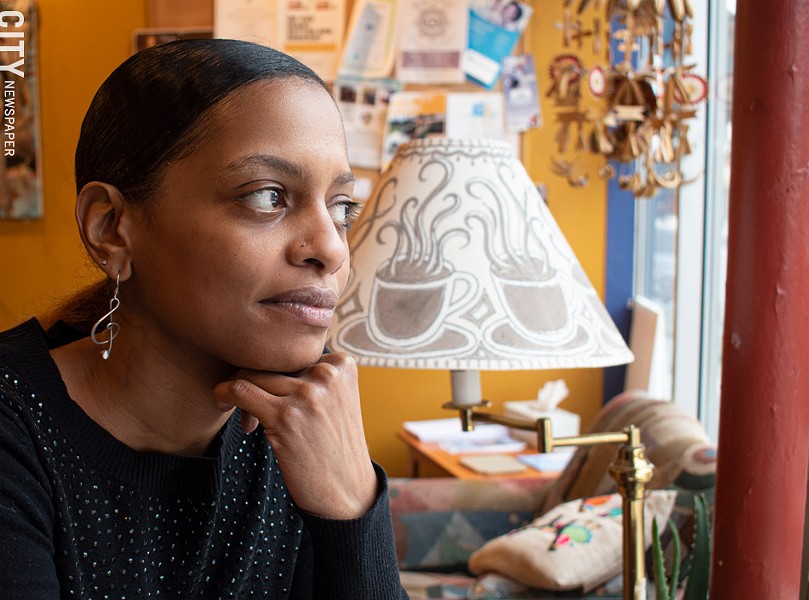 PHOTO BY JACOB WALSH Jasmin Reggler, who campaigned for City Council member Mary Lupien and whom Lupien tapped to be her legislative aide, was barred from working for the city when she tested positive for cannabis.
Jasmin Reggler knows a thing or two about how city policy can change the direction of a person's life. Less than two years ago she was shut out of a job at City Hall after the drug test she had to take for the position came back showing she'd used cannabis.

The city later revoked the policy that cost Reggler the job. But Reggler, who works as house coordinator for St. Joseph's House of Hospitality, believes officials should have scrapped it sooner. City Council needs to constantly question the policies that the city has in place and how they could be improved, she said, which is why she plans to run for one of the five at-large City Council seats that will be on the ballot this November.

"We almost have to force (transparency), we have to stay on top of the issues going on in our city,” said Reggler. “We also have to continually do follow up, not just address one thing in one moment and then let it go.”

In December 2019, then-incoming City Council member Mary Lupien had tentatively hired Reggler to serve as her legislative aide. But soon after, she received a notice from the city informing her she couldn't have the job because the drug test she took showed she had the psychoactive component of cannabis, THC, in her system. The positive test meant that she was barred from employment with the city for one year. The city subjects all prospective employees to testing where their urine is screened for several drugs; at the time cannabis was one of them.

CITY wrote about Reggler's experience in January 2020 and by that April, Mayor Lovely Warren and City Council had acted to stop screening most prospective city employees for cannabis use.

But by the time the city officials had acted, Reggler had made the decision to run for Council.

“In January it was really just a thought, but by March I decided this needed to be done,” Reggler said.

A friend of Lupien’s for about eight years, Reggler and the East District City Council member have similar stances on many issues. Among them, Reggler believes the Police Accountability Board requires more funding from city government as well as more independence from it.

The city’s 2020-21 budget allocated $396,200 for the Police Accountability Board, which most Council members believe should be subordinate to the legislative body. The board is currently at the center of a legal battle between the Rochester Police Locust Club and the city over its ability to investigate complaints of officer misconduct and compel discipline when complaints are substantiated.

“We need them to have the power to put forth disciplinary measures,” Reggler said. “We also need to take a hard look at the police department budget, and figure out what this money is for and where it’s going.”

Reggler is also focused on housing justice. She's an organizer with the Rochester City-Wide Tenant Union, a group which has long-standing ties with St. Joseph’s House of Hospitality. Her goal on Council would be to listen intently to the needs of the community.

“Although I would be a City Councilperson, the community would be my employers,” Reggler said. “I want to hear from them, and I would listen to what they tell me.”

Lupien said she admires Reggler and regularly turns to her for advice and guidance. She sees her as a perfect fit for Council because of her activist roots and because she’s directly experienced how city policy can affect a person.

“She was personally impacted by how power is wielded in this community, and I think it gives her all the motivation,” Lupien said. “We fight hardest when things impact us directly.”

In November, all five at-large seats on City Council will be up for election. Incumbents Mitch Gruber, Miguel Meléndez, and Willie Lightfoot will be running for re-election. Malik Evans, currently an at-large Council member, has announced that he plans to challenge Mayor Lovely Warren for the Democratic line. Council President Loretta Scott, who also has an at-large seat, has not announced whether she’s seeking reelection.