REDD makes a splash in the East End 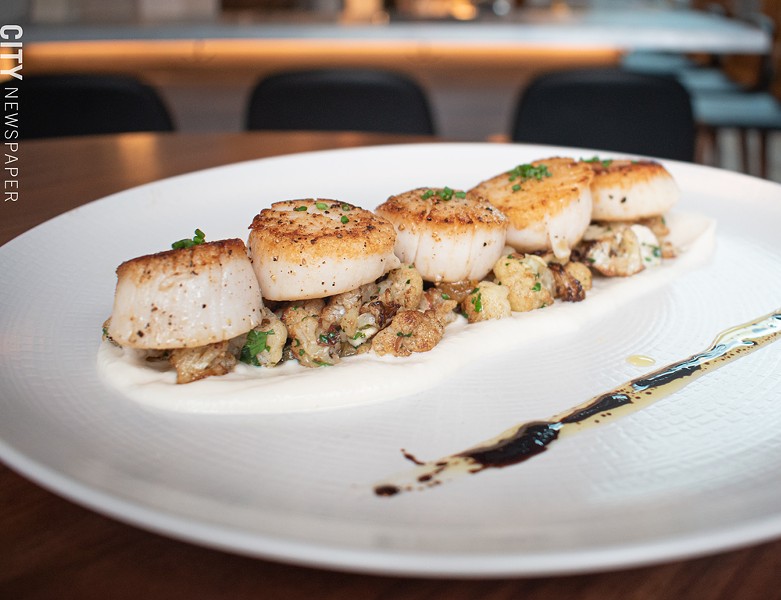 Has there ever been a restaurant in Rochester dining history so feverishly anticipated as REDD? The upscale New American restaurant, led by acclaimed chef Richard Reddington, has been generating buzz since its launch announcement in December 2018. With its opening in mid-August at the site of the former 2Vine, REDD is the first restaurant in Rochester with a Michelin-star chef at the helm.

Reddington struck out on his own in 2006, opening REDD in Yountville, California, not far from his friend Thomas Keller's world-renowned restaurant, The French Laundry. REDD combined Napa Valley cuisine with classical French and multi-cultural influences, and was awarded a Michelin star from 2008 to 2014. With the closure of REDD in October 2018, Reddington decided to move back east.

Reddington told WXXI News in December that he always planned to return to Rochester, but it took longer than he originally thought it would. "My family is all in Rochester and the East Coast, and my priorities have shifted," he said. Reddington remains a partner in Redd Wood, his casual Italian restaurant in Yountville.

I first visited REDD one evening shortly after its mid-August opening. Even on a Wednesday, every seat in the dining room was filled. The interior of the restaurant is bright and airy, done up in soft neutrals of gray and brown. One wall is taken up by a colorful floor-to-ceiling display of cookbooks, another by a mural of rolling mountains. The kitchen is partially open to view, affording diners a glimpse of Reddington at work.

Despite the open floor plan and full house, the forgiving acoustics of the space made it easy to have a conversation with my friend without raising my voice -- something that, at the ripe old age of 26, I'm increasingly grateful for. The implicit dress code appears to be business casual, so no need to dust off your formal attire.

Like the original REDD in Yountville, the new restaurant combines Napa Valley influences with culinary traditions from around the world. Sashimi, duck confit, Mexican street corn, lobster risotto, onion rings, and wood-fired pizzas are all equally at home on the dinner menu. Pizzas start at around $13, with mains ranging between $15 and $39.

The wine list is extensive, with the majority of the selections hailing from California, France, and Italy. I began the evening with a Chenin blanc from the Loire Valley, a light, acidic white ideal for toasting the end of summer.

We started the meal with a salad of cubed bread, local tomatoes, cucumber, and red onion, a take on the classic Italian panzanella made more decadent with the addition of creamy, oozy burrata cheese.

My friend ordered the prosciutto pizza, which arrived with a beautifully blistered crust, mounded with fresh arugula and showered with grated Parmesan. I selected the chicken mole, a succulent hunk of roasted bone-in breast and leg meat which arrived atop a pool of cheddar polenta and dark, spicy, mole sauce. Juicy kernels of sweet corn and sliced scallions rounded out the stunning presentation. A well-balanced combination of sweet, spicy, and salty flavors, the mole was the highlight of the evening for me.

We closed out the evening with caramel budino and a slice of chocolate ganache tart. The budino (Italian for pudding or custard) was rich and velvety, with toasty overtones of burnt sugar accented by a hint of sea salt. The chocolate ganache tart was dark and intense, the fruity, earthy flavors of cacao coming through loud and clear. If you like your chocolate really, really dark (like I do), you'll enjoy this.

In the name of research, I returned to REDD on a quiet Sunday afternoon some weeks later to try the brunch menu with my family. The interior of the restaurant is even more striking during daytime, with sunlight pouring in through large skylights, making the Riedel stemware gleam.

The brunch menu shares some starters with the dinner menu (the aforementioned tomato salad and tuna tartare) but also has more traditional breakfast and brunch fare such as buttermilk pancakes, corned beef hash, omelets, yogurt and granola, and huevos rancheros. Sides of bacon and sausage are available.

My sister went for the omelet, which was stuffed with spinach, mushrooms, and pancetta, served alongside mixed greens and a generous pile of potatoes and caramelized onions. A truly outstanding omelet is deceivingly difficult to find and even harder to make, but this exquisitely fluffy, buttery specimen seemed ready to float off the plate.

On the more unconventional end of the brunch spectrum, my mother opted for the halibut tacos. Nuggets of the firm-fleshed fish were battered and fried, nestled in corn tortillas with chipotle sauce and a dollop of guacamole. If you prefer your brunch with a little bit of a kick, this dish has your name on it.

For myself, I opted for the full-on indulgent Sunday brunch experience: a breakfast pizza and a glass of prosecco. I've long been skeptical of breakfast pizza as a concept, but this is one I can get behind. The pie came abundantly topped with tender slices of melt-in-your-mouth smoked salmon, plus a scattering of pillowy scrambled eggs, and was studded with capers atop a creamy fontina cheese base. The prosecco, which I ordered before I had fully decided on my meal, turned out to be a good move. Crisp, dry bubbles were a refreshing complement to the salty, flavorful meal.

Given the continued buzz around the restaurant, dinner reservations are highly recommended. As I write this review, the next three weekends are sold out or nearly sold out during dinner service. Reservations are available up to 30 days in advance.