Send in the clowns

February 01, 2021
Artistic responses to the events of 2020 are vast and varied. Creatives have lambasted the former president, reacted to matters of social justice, and recorded the fear, sorrow, and loneliness of the pandemic.

Like that of her counterparts everywhere, the work of Rochester artist Rebecca Soriano is imbued with the bewilderment that has befallen all of us over the last year, like superimposed sock and buskin masks symbolizing comedy and tragedy in the theater. 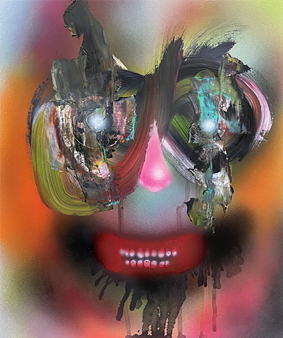 Her portraits are exaggerated, semi-abstract faces that are more reflections of a human’s inner world than the carefully guarded faces we wear around. Her people are grotesque or they’re beautiful, but either way, something’s off with them. Whether delicate, detailed graphite portraits or violent sprays of airbrushed pigment forming floating clown heads, each work is filled with an anxious, unnerving energy that conveys complex but relatable emotion.

In a recent conversation with Soriano, I asked her to share her inspiration. She later sent me an artist statement that oscillated between grappling with dread and the mixed relief and trauma of catharsis.

“The string on a cheap Halloween mask snapping,” the statement read. “Steam rushing to escape a pressure cooker. The breathless tension of watching glass shatter. The struggle and exploration of identity. Repression. Depression. A silent scream. The moment before a needle pierces an eye. Service with a glazed over expression. Tears pooling into the corners of upturned lips. Self-soothing through fire.”

Her work, the statement continued, is a form of chaotic self-therapy, an exploration of abstract concepts and feelings. Her portraits are reflections “of the silent but violent struggle to exist. The process of developing these visceral images feels like unclenching my emotional jaw, if only for a moment.”

Soriano was born in the Philippines, where she lived until she was 3 and her family moved to California. Her fourth birthday was celebrated, in an appropriately American style, she says, at a Chuck E. Cheese’s.

“The dream,” she said, laughing. “It was like, fully getting into the American lifestyle.”

An art school drop-out, Soriano had taken a stab at the fashion design and costuming program at Fashion Institute of Design & Merchandising in San Diego, and later studied fine art printmaking at Academy of Art University in San Francisco. She was drawn in particular to lithography, which she simultaneously calls a “tedious, punishing format” and impractical and expensive process. But she still tries to incorporate various printmaking techniques — working with layering and separations — into her current work.

Life changes made San Francisco’s already unreasonable and rising cost of living untenable, and she relocated to the more affordable Rochester almost seven years ago. 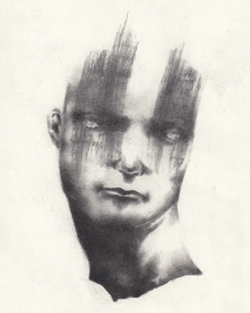 Today Soriano is a serious materials-phile who experiments with different paper textures, charcoal, graphite, gouache, acrylic, and airbrush in her drawings and paintings. Some of her recent work is a series of semi-abstract portraits that seem like nods to classical statues, but are characterized by a repetition of features, particularly eyes.

One has a line of peepers stacked up the face and off into the blank space, as if Picasso got his hands on a Bernini marble sculpture. Others have melting features, inscrutable expressions, adorned with droplets of sweat and tears or crowned by a spray of glass shards.

“When I make them it feels like a representation of trying to find your identity and pin it down, like presenting yourself trying to look normal or trying to fit a mold, but not quite getting there,” she said.

Soriano had experience using an airbrush to decorate cakes at various bakery jobs, and said that for a while she’d been obsessed with the idea of using the tool for art. She began what she called “silly, quick exercises,” amusing herself by applying clown makeup to acrylic-painted shapes on paper. 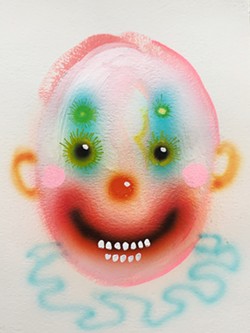 True to the divisive nature of clowns, the drawings are at once jarring and playful; they’re silly but subtly sinister. They’re garishly neon, with exaggerated smirks, beady eyes, and baby teeth. And she says they’ve been surprisingly popular. “I didn’t realize so many people have a clown appreciation,” she said.

Local artist M. Storms recently commissioned a clown painting from Soriano, and said that while Soriano’s paintings make her happy, she also sees the “humorous and terrifying” portraits as the spirits of our current times.

“We have the best, brightest spectacles and the most luxuries ever afforded to humanity, yet our wailing and existential horror at the absurdity of it all grows greater and louder,” she said.

Many artists have lamented their inability to create over the past year, commiserating on social media over the practical excuses but also nearly universally pointing to a nameless ennui that blocked their muses. Soriano said she felt the same at different points during the pandemic, particularly when she was facing and then recovering from a surgery in the fall.

But she said she eventually realized that being productive helped alleviate stress and anxiety, and that sharing her work on Instagram and other social media platforms helped her connect to people.

Aside from working two jobs — as a baker at Voula’s Greek Sweets in Rochester and a server at Lulu Taqueria in Fairport — Soriano has kept busy experimenting with new materials, and drawing nearly every day.

“People talk about the shutdown being the introvert’s dream, staying home,” she said. “But being home and alone with your thoughts and feelings, and kind of being forced into isolation, I don't know, you can either wallow in it, or get weird by yourself.”

Revel in the details is an ongoing series by Rebecca Rafferty, CITY's life editor. She can be reached at becca@rochester-citynews.com.