Rebecca reviews "Cabinet of Wonders" and "No Safe Word"

I saw the very entertaining "Cabinet of Wonders" in the packed Spiegeltent last night, which included everything there's to like about the circus, without the animal cruelty. The show began with the subtlest of clowns -- a wiggly goofball who worked the audience with priceless facial expressions -- performing some tricks while the husband-and-wife hosting team, Matt and Heidi Morgan, worked the audience with witty banter. This led smoothly into an elegant and sexy Spanish Web performance, set to live guitar and the pretty, pretty vocals of Alexander Morgan, a John Maher-esque fellow. Several people I met during the intermission wondered if the gentleman might have an album they could go buy.

The ringleaders' acts fall somewhere between talented professionals and the madcap after party antics at a friend's house as the evening is winding down: stupid-silly in a lovable way. An acrobatic contortionist performed some mind-bending tricks with a hula hoop and later, a bow and arrow. All I have to say is: Katniss Everdeen, eat your heart out.

The last acts of the show were dedicated to dance: a tender, acrobatic slow dance of supreme grace and strength, followed by a flourish-y ragtime number with a surprise ending. If we're calling "Cabinet of Wonders" the circus, then the advertised one-legged tap dancer attraction, would be the traditional "sideshow" element. But far from a passive spectacle, the gentleman rocked the stage with a solo dance and guitar number. If you're wondering what one-legged tap dance looks like, I'd encourage you to see the show -- you won't regret it.

"Cabinet of Wonders" will be performed each day for the festival in the Spiegeltent. Check rochesterfringe.com for times. $36. Appropriate for ages 13 and up.

Moving through opera and pop numbers, the company bodily explored the concepts of submitting control and release, and at some point everyone in the show was fully nude, the different bodies blurring into episodes of strength, vulnerability, and finding strength in vulnerability.

"No Safe Word" will be performed again on Friday, September 18, and Saturday, September 19, at Geva Theatre Center. 9 p.m. $12. Appropriate for mature audiences. 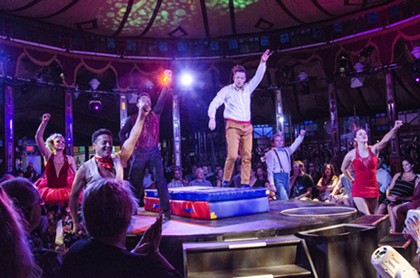 Cabinet of Wonders
By MARK CHAMBERLIN
Click to View 7 slides