Ready for a post-COVID life? Your dog may be dreading it 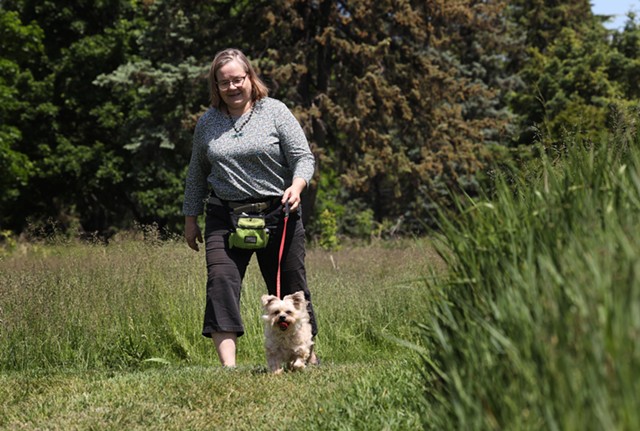 For most of the last 15 months, Ingrid Bock rarely left her Penfield home.

"I was even having my food delivered," said Bock, who is a Rochester Philharmonic Orchestra cellist. "I was taking COVID very seriously, so for months on end, I didn't leave the house more than to check the mail."

But after she was fully vaccinated against the virus that triggered a global pandemic, Bock began to venture out more often.

That's when Bock, who is also a dog trainer, noticed some new behaviors in one of her dogs, Diesel, a 12-year old Yorkshire terrier mix.

"He would be right on my heels," she recalled. "It was hard to get through a doorway 'cause he was trying to stick right to me and also he would then bark if I shut the door and was on the other side of it, and he sounded quite frantic. It was really sad."

Diesel was experiencing separation anxiety, a condition in which a dog becomes distressed when separated from its person. 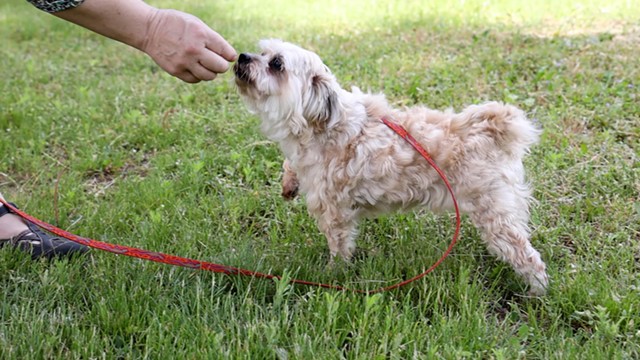 It's not uncommon. About 50 percent of dogs in the U.S. have some sort of separation-related behavioral problem, according to Malena DeMartini, a San Francisco-based dog trainer and counselor who specializes in separation anxiety.

But DeMartini believes the problem will become even more widespread as people start to transition back to their pre-pandemic routines.

"The data that we're collecting right now is indicating that we're going to see epic proportions of separation related behavior," she said. "We are inundated, inundated with clients right now."


The separation anxiety training program that DeMartini developed over 20 years ago isn't complicated, but it does require time and a lot of patience.

She tells clients to not allow their dog to be alone for a moment longer than it can tolerate. There is no question about the limit of a dog's ability to endure separation, because a camera will be set up in the house and the trainer and/or owner will be observing them on a live video stream.

"We want to be watching that dog live so we know what point in time that dog starts to experience or display any indicators of anxiety," she explained.

Over weeks or possibly months, the dog owner gradually and slowly increases the amount of time they're away from home, so the dog becomes comfortable with longer periods of separation.

Bock has been using DeMartini's technique with Diesel. She's noticed a definite improvement in his anxiety level, describing a recent outing to a walking trail.

"He has always been at the other side of the door when I return to what I call the 'dog suite' at my house, (but) as I wanted to get him in the car, he hadn't even gotten up yet,” she said. “That shows me how comfortable he's starting to get with my absences."

Other dog trainers across the U.S. who are certified in DeMartini’s program often work with clients remotely. 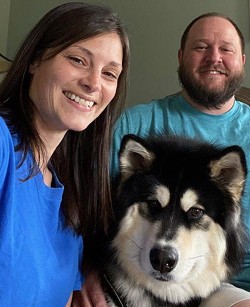 Sara Trost of Greece found a trainer in Minnesota to help Gus, her 1-year-old Alaskan malamute who became distressed when he was left alone for extended periods of time.

Trost and her husband adopted Gus last summer when she said they had few opportunities to leave home due to COVID-19 restrictions.

When Gus was about 7 months old, the couple went Christmas shopping. They later watched a video recording they made and saw that the dog barked and clawed inside his crate for the entire three hours they were gone.

“That’s when I started to think this is beyond him just being a puppy getting used to his crate,” Trost said.

Six months after beginning the desensitization program, Trost said Gus now remains calm when left alone for up to three hours. Her goal is to get him to tolerate a six-hour separation.

“You start off really slow,” she said. “For, like, the first month we couldn't leave him by himself at all because you don't want to ruin any of the training you've done.”

Even though the training can be tedious, DeMartini urged people to have empathy for what their dogs are going through.

"The dog is truly suffering when left alone," she explained. "This is not a naughty dog. This is not a dog that is trying to be spiteful or anything of that sort. While it seems irrational to us, because I always come home, why would my dog freak out? But to the dog, it is very, very real. This feels like life or death."

Dogs with separation anxiety might whine, bark and howl, chew and scratch. Some may even urinate or defecate in their home.

But DeMartini implored people to not punish their dogs by shouting at them or forcing them to wear a shock collar or citronella collar.

Doing so, she said, would not only be unfair to the animal, it would intensify the dog's anxiety.

"We're saying, 'Wow, you're so afraid of being alone and now I'm going to use some punishment to tell you you're a bad dog,' and now alone time is actually even more frightening," she said.

DeMartini believes dogs with pandemic-related anxiety issues will fall into two distinct categories: Newly acquired puppies and adult dogs who have rarely spent much time alone and simply require some time to adjust, and dogs who are suffering from separation anxiety that requires more long-term intervention.

Some dogs who experience behavioral problems aren’t as fortunate as Gus and Diesel.

Separation anxiety is a common reason pets are surrendered to Lollypop Farm, according to Caitlin Daly, vice president and COO of the Humane Society of Greater Rochester.

Even though Daly indicated that Lollypop’s surrender rate has been fairly stable due to the organization’s limit on the intake of animals during the pandemic, she said a few more dogs were recently surrendered to the shelter due to separation anxiety than is typically expected.

Daly is optimistic that the problem won’t intensify because she has faith that animal behaviorists and trainers are working hard to make sure it doesn’t happen.

According to a nationwide poll by the American Society for the Prevention of Cruelty to Animals, 87 percent of respondents said they were not considering rehoming their pet in the near future.

The ASPCA poll estimates that nearly one in five U.S. households adopted a cat or dog since the beginning of the COVID-19 crisis.