by BY TIM LOUIS MACALUSO 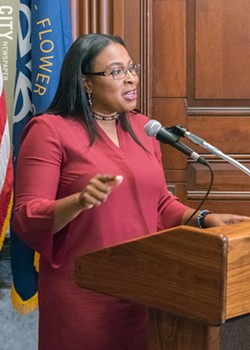 Will a state takeover of the Rochester City School District be on the ballot in November? Voters could find out within the next few days. State Supreme Court Justice Scott Odorisi will hear arguments on Thursday, and his decision could have long-lasting ramifications.

In June, City Council approved Mayor Lovely Warren’s request for a referendum on a temporary state take-over and removal of the school board. The referendum is non-binding; only the state legislature can remove the elected board. And last week, the school board filed a civil suit against the city to keep the referendum off the ballot.

Both parties are up against a deadline: No changes can be made to the ballot for the November election after August 5.

Either way, there may not be a true winner or loser. There’s a risk that the public may be tired of the off-and-on disputes between the city and school district, which have dragged on for years.

The suit is the latest in an escalating battle between Mayor Lovely Warren and the Rochester school board over who is to blame for the district’s struggles and who should control the district and its near $1 billion annual budget.

In the suit, the district asks the court to:

• Issue an injunction, stopping the city from putting the referendum on the November ballot;

• Instruct the city to stop using public funds in relation to the referendum.

In approving the referendum last month, City Council approved changes to the City Charter, removing language referring to the school board and board members’ salaries. Since the city does not have the authority to remove the board itself, the district argues, the referendum is “advisory,” and it’s “unauthorized” and “illegal.”

Related In the RCSD-city fight, the children are losing

In the RCSD-city fight, the children are losing
An ugly battle is heating up between City Hall and the school district, and nobody’s looking very good in this.
By Mary Anna Towler
Urban Journal
The district also argues that the city has improperly used public funds to support the referendum. The suit cites a May news release promoting a possible takeover plan, a May video of the mayor “urging residents to contact their senators and Assembly members to support a State takeover,” the June Council vote on Warren’s request for a referendum, and Warren’s July letter mailed to 30,000 people, urging them to vote in the referendum.

In its response, the city says that the referendum is not "advisory," as the district claims; state law requires it. The reason: the charter change "abolishes an elective office" and eliminates the charter's provision for school board members' salaries. While it is the state that has the authority to abolish the school board, the city argues that the charter change was necessary in order "clear the way" in the event that the legislature votes to abolish the board.

The city also argues that because the issue is complex, "it is incumbent upon City leaders to educate the public about the referendum and the issues implicated therein prior to the November vote." Warren's actions related to the referendum, the city argues, have been educational. "At no time has Mayor Warren or any other City official urged a vote for or against the Charter amendment," the city says.

Warren has repeatedly argued that the referendum is an opportunity to give parents and residents a voice concerning the future of the district, its students, and its families. Board members, however, argue that parents and residents did voice their views on the matter when they voted in the Democratic school board in June. The referendum, board President Van White says, is asking people to vote to remove their voice from the conversation.

State Supreme Court Justice Scott Odorisi will hear arguments on Thursday in the Rochester school district's suit against city officials. The district wants to Odorisi to prevent a November referendum on a state takeover of city schools.