As the school year nears, Lesli Myers-Small is moving fast and breaking eggs

PHOTO BY JACOB WALSH Rochester Superintendent Lesli Myers-Small in her office at the RCSD.
Lesli Myers-Small had already been up for three hours, baked four dozen cookies and three quiches and replied to at least two dozen emails, when she shuffled into her office a little winded shortly after 8 o’clock in the morning apologizing for running late.

She had broken a nail on her French-manicured thumb. “I was trying to find the glue to fix it,” she explained as she set down the armload of books, the purse, and the high heels she was clutching, took a seat at a conference table, let out a “whew,” and reminded her spokesman in the room that she had a 9 o’clock.

Three months into what could be the toughest job in education in the country, Myers-Small seemed to be living the Silicon Valley mantra of moving fast and breaking things.

Her job as the superintendent of Rochester public schools is to fix the troubled school district she inherited, but Myers-Small learned from her grandmother, who instilled in her a love for the culinary arts and whom she invokes often, that you can’t make an omelet — or a quiche — without breaking a few eggs.

Myers-Small would break more than a few eggs in the coming week.

That morning, schools were to open in four weeks to the day. The next day, Myers-Small pushed the opening back a week and replaced her plan for a hybrid learning schedule for the youngest students with a remote learning model for all students at least through Thanksgiving — a decision she would call “gut-wrenching.”

Five days later, the superintendent announced she would slash the district’s budget by 20 percent — roughly $130 million — in response to a looming threat from Albany to cut state education funding by the same proportion.

“The key thing is we have to start creating savings and look at how are we going to do more with less,” Myers-Small said. “I know that we’ve said that previously, but we really have to do that now.” 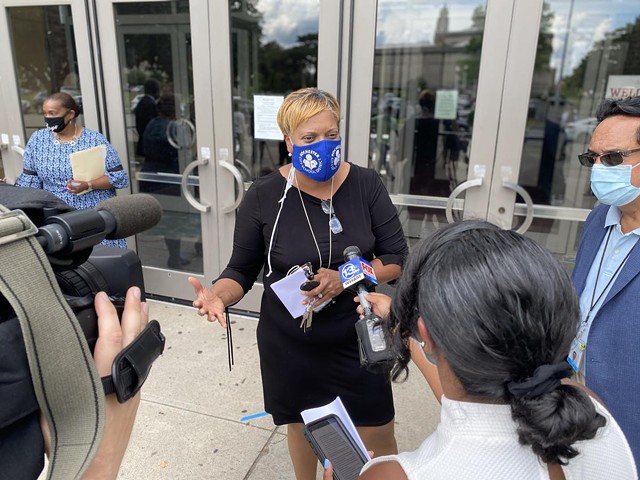 She spoke from an office on the second floor of the Rochester City School District headquarters on Broad Street whose naked walls suggested just how busy she had been since becoming superintendent. Lining the edges of the room on the floor were framed pictures, diplomas, and letters that she could not get around to hanging. In one frame was her acceptance letter to the University of Rochester from 1987. She would later earn advanced degrees, including her doctorate, from St. John Fisher.

“It’s very busy,” Myers-Small said. “Having the responsibility for 25,000-plus students is something I don’t take lightly . . . How do I cope? Honestly, I bake and I cook.”

In less than an hour she would join members of her cabinet on the third floor for an antiracism retreat followed by a friendly cooking competition.

The last year has been something of a whirlwind for Myers-Small.

Just five months before a desperate Rochester Board of Education tapped her to replace Terry Dade, who unexpectedly resigned after only nine months, Myers-Small left a longtime post as superintendent in Brockport for a job with the state Education Department. As the assistant commissioner of school reform and innovation, Myers-Small was responsible for helping districts turn around struggling schools.

Now, she has the seemingly impossible task of turning around a struggling school district. To do that, Myers-Small is putting in 16 to 18 hours a day by her estimation and that of people who work with her closely.

“I thought Terry walked into a storm,” Garcia said while waiting for Myers-Small to arrive in her office that morning. “She came right in the middle of the storm.”

Six days later, in a sign that eggs were still being broken, Myers-Small announced in a late-night news release that Garcia had been let go. No reason was given, but his departure was one of many at the highest levels of her administration since May.

Myers-Small, who is 51, had applied for the RCSD superintendency in 2019, but was passed over for Dade. When he hastily left for a job leading an affluent suburban school district in the Hudson Valley, the spurned and red-faced Board of Education went crawling back to Myers-Small.

The board’s interest in her was twofold. First, she was local, upping the odds that she would stick around in a district that had seen six superintendents in 10 years. Second, she was qualified.

Before her nearly eight-year tenure at Brockport, Myers-Small spent five years as an assistant superintendent in Ithaca. She also worked as an administrator in Greece and began her career in Rochester as a guidance counselor at Wilson Magnet High School. Among her students there was Mayor Lovely Warren.

From the outset of her administration, Myers-Small has cast herself as an independent thinker willing to push back against a board notorious for micromanaging superintendents.

“I’m pushing them,” she said of her relationship with the board. “I am not a ‘yes’ person.”

Adam Urbanski, president of the Rochester Teachers Association, said Myers-Small’s willingness to reverse course on her plans for reopening schools suggested she was open to self-examination. The union had been pushing for a remote learning model, citing health concerns.

“A typical superintendent would say, ‘No, I already submitted a plan,’” Urbanski said. “But she didn’t do that. She reversed herself, which I think says a lot about her leadership, that’s she’s not afraid to rethink conclusions.”

Born in Concord, Massachusetts, Myers-Small spent her early years in nearby Stow before her parents moved their family to Pittsford in the late 1970s.

“I did have some difficulty there,” Myers-Small told WXXI’s “Connections” in May of her experience in Pittsford schools. “Back then, our family was one of few families of color. Unfortunately, the n-word was used on the bus and in school and my parents had to help me negotiate that very difficult situation.”

Like most families of color, if not all, hers had been touched by racism.

As she tells it, her grandfather, Lloyd Mills, was an outspoken advocate for the advancement of people of color before he was lynched on Valentine’s Day in Chase City, Virginia, in 1940. There is no official record of the event, but family lore has it that Mills was a businessman who worked on horseback and that his wife discovered him dead dragging behind his horse, his foot caught in the stirrup. The story goes that his death was ruled an accident, with the authorities saying that Mills fell off his horse when the animal got spooked by thunder and lightning and bolted. His wife, however, the grandmother who would teach Myers-Small to bake and break eggs, became convinced that foul play was involved when she examined her husband’s body and found what looked to her like rope burns around his neck. Mills was survived by their 10 children, the youngest being Myers-Small’s mother.

Myers-Small doesn’t have children of her own, but she became a stepmother to four when she married her husband last year. The children, ages 13 to 25, call her “Ms. Lesli.” 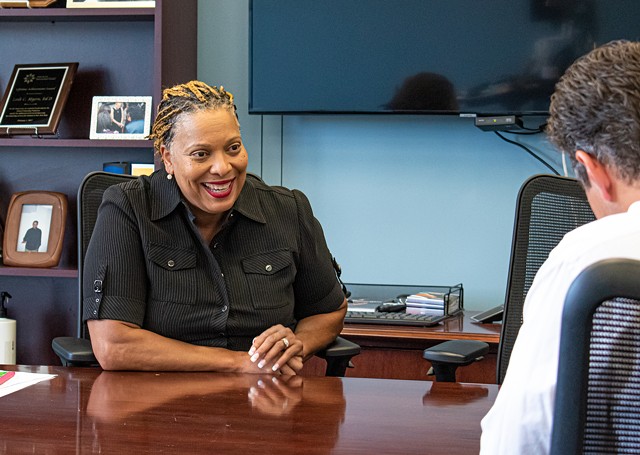 Superintendents are fond of referring to children as the future. Myers-Small calls them the present. Her welcome page on the RCSD website opens with the words “Kasserian Engeri,” a greeting of Masaai warriors that translates to, “How are the children?” The traditional response would be, “All the children are well.”

Anyone familiar with the general malaise of Rochester public schools over the last 25 years knows no adult in the system could give that response with a straight face. Rochester is by many measures the lowest-achieving school district in the state. The city ranks third in the nation in childhood poverty.

Every superintendent who has tried to right the ship has played on some variation of the theme “children first.” Myers-Small said she hopes her legacy will be upholding the concept of child wellness — mind, body, and home. She said that will be the focus of a new strategic plan for the district she expects to release this month.

“It sounds really simplistic, like, ‘Yeah, Les, that’s what everybody should do,’” she said. “But you’d be surprised how many people don’t keep that as their focus — asking if the children are well.”

Then she slipped on her heels and prepared to meet her cabinet, with whom she would break more eggs.