RCDC steps into the spotlight 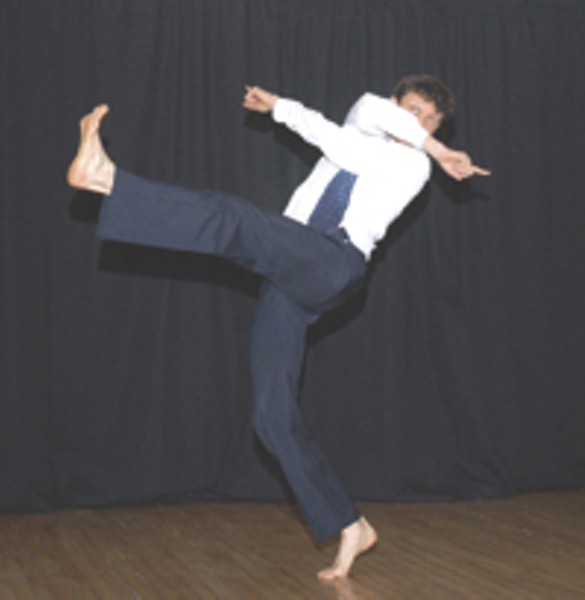 Eight dancers fly across the studio, jumping and spinning with technical prowess in time to the speeding music. A man in full business attire accompanies his pedestrian movements with an ever-changing, politically charged vocal soundtrack. Changing the pace, a woman in flowing white gently glides about the empty stage, pausing to contemplate the one movement she seems to both love and hate.

And so it unfolds during an hour-long presentation, the second-to-last of a Sunday afternoon dance series put on by the Rochester Contemporary Dance Collective. The line-up includes several original dance pieces, all created by local choreographers. After the performance, the enthusiastic applause and congratulatory remarks confirms Rochester's continued support of its local dance community.

In 2004, five local choreographers --- Christine Fendley, Richard Haisma, Liz Hallmark, Colleen Hendrick, and Anne Harris Wilcox--- joined forces to form the Rochester Contemporary Dance Collective. Today, RCDC has expanded to include 14 choreographers from all over the upstate area, and now offers performances, classes and viewings for the public. The collective is a mixed bag, fashioned from professional dancers, college students, and independent artists all striving to develop their creative voice through original choreography and performance.

According to the website www.rochestercdc.org, RCDC's official mission "is to strengthen the western New York dance community through performance, professional development, and education." The group works to fulfill that mission by providing choreographers the support to develop, and the space to present their original choreography. Founding member Wilcox says that RCDC aims to "be an organization that anyone who dances can go to for a resource." Another goal of the collective is to expand the dance audience, and keep the creation of original contemporary dance alive in Rochester.

The collective's performance series is very "user friendly," says Wilcox. During the 2006 Spring Series, RCDC offered up six unique concerts, each diverse in their programming and presentation. According to board member Darryl Clark, the series showcases a mix of choreography that is "alternately kinetic, introspective, and accessible to dance viewers of all ages." Taking place at the Bush Mango Drum and DanceCommunity Center, each show is a fairly informal affair. After the performance, the audience is invited to mingle with the artists and performers at an informal reception.

Funded partially by a decentralization grant from the New York State Council on the Arts, and the Arts and Cultural Council, RCDC is fast approaching the end of the spring dance series. However, there are two more productions scheduled for the fall. Artists who wish to present their work in one of the performance series need to participate in a development process before going before an audience. This is part of RCDC's Fieldwork Project, which is a nationally recognized technique for creating dance.
In the future, RCDC would like to expand the number of Fieldwork sessions held, as well as incorporate more regional artists and choreographers into their series. Naturally, RCDC would also like to see the size of their audience build, and eventually place the performance series into a theater.