October 08, 2020
To hear the polished tone and see the charismatic delivery of Rochester singer-songwriter Sherice Barnes, it’s hard to imagine that just a few years ago, she was paralyzed by stage fright.

But in a short span of time, the 24-year-old Barnes shed the layers of insecurity holding her back to reveal the R&B artist She Rise. Her first EP “Moody” was released earlier this year via the local music label It’s Just Music, or IJM. 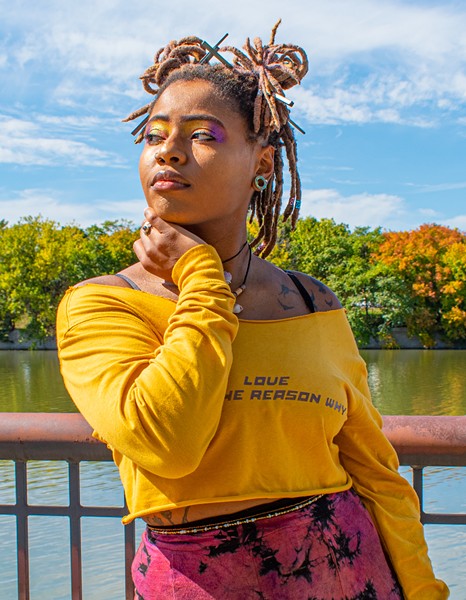 “Even in the ‘Moody’ EP, you can see I was going through a lot of heartbreak, I had self-doubt, I didn’t know my worth — all of these things,” Barnes says. “So it was kind of just like, She Rise. I’m going to rise from this because once you reach the bottom, you can’t go any further down really. You just have to go back up.”

This month, She Rise ascends higher with “Moody Deluxe,” a new album that coincides with the Oct. 3 release of a new music video for the song “Games.”

The “deluxe” album is an extended version of the EP, featuring new tracks, including “Moody” and “Last Fck.” On both tracks, Barnes achieves a sultry, sophisticated R&B sound while delving into the complex nature of romance, particularly when good chemistry drags out a dysfunctional relationship.

Barnes is the only female musician of four artists on the fledgling IJM label, which launched in April 2019. But she is emerging as the face of it.

“Her performance — it’s just different, it’s breathtaking,” says Larry “LJ” Ingram, who at 26 is the label’s owner and chief executive.

He points to Barnes’ ability to connect emotionally with listeners. Barnes’ smooth musicianship and engaging, pithy songwriting at times appears to barely scratch the surface of her potential.

“I see her being very big,” Ingram says of Barnes. “She could really lead the label to corners that we wouldn’t be able to reach without her.”


As Barnes tells it, there were early signs that she was on the path to becoming a performing artist. As a pre-schooler, she would start singing for strangers in the supermarket. As she grew up, her cousin introduced her to CDs by obscure artists, singers like Amerie, who would balance out a mainstream pop diet of the likes of Raven-Symoné. Barnes also sang in chorus in both middle school and high school.

Despite her precociousness, she grew to struggle with public speaking and stage fright. Somewhere along the way, she lost confidence.

It wasn’t until her junior year at Buffalo State College, as she recalls, while studying media production, that she began to regain the confidence she had in childhood. She started going to the open mics at Clarissa’s Cafe Lounge in Rochester’s Corn Hill neighborhood, where the host, stand-up comedian Yolanda Smilez, was a constant source of encouragement.

“I loved how raw she was, ‘cause that really speaks to me when someone’s raw,” Barnes says of Fink. “And also, just the different sounds she was making. It’s amazing how our bodies can create these sounds and they are filled with emotions.

“We don’t even have to say words sometimes, and you can feel what that person is feeling.”