Rally will support DACA and 'dreamers' 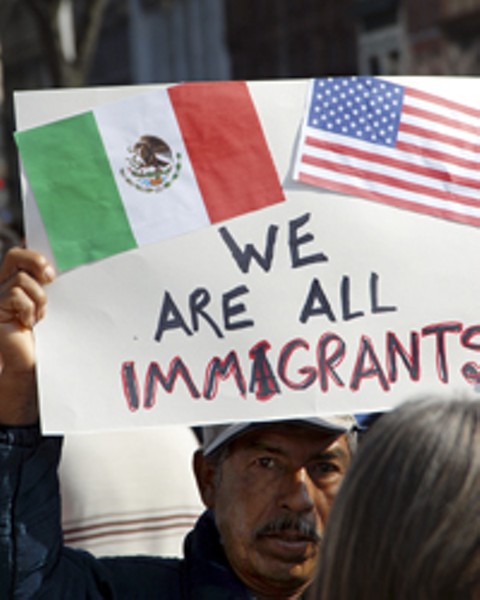 Clarke Cond
UPDATE 09/08/2017: The Greater Rochester Coalition for Immigration Justice is holding a rally at noon on Friday to save the federal Deferred Action for Childhood Arrivals program (DACA). President Donald Trump and his cabinet heads announced this week that they're ending the program, which former President Barack Obama implemented through executive order.

The rally will be held in front of the federal building at 100 State Street. It will be followed  by a meeting at Downtown Presbyterian Church, 121 North Fitzhugh Street, to discuss ongoing action to "save DACA and fight the anti-immigrant Trump adminstration," says a press release from the coalition.

DACA has allowed people who came to the US before they were 16 and who have lived in the country continuously since 2007 to work or go to school. The dreamers, as they're often called, typically were brought to the country by their parents when they were very young. DACA allowed them to live their lives in the open without fear of deportation, though it's not an amnesty program nor does it provide them, technically, with legal immigrant status.

There are an estimated 800,000 people with DACA authorizations working or going to school in the US.  Around 42,000 of them live in New York State.

"This inhumane act will permanently hurt the dreamers, who walked out of the shadows and trusted our government," says the press release. "Instead, this decision will destroy their families and futures and cost the US billions. Dreamers need a permanent legislative solution with no strings attached that will provide them with the American dream."

Friday morning, the Reverend Prince Singh, bishop of the Episcopal Diocese of Rochester, sent out a statement in support of DACA and to announce he'd be at the rally.

"God calls us to welcome the stranger among us," Singh says in the statement. "The Episcopal church welcomed me and that's why I am here. These young people have grown up here and are an asset to the nation. DACA is stringent in its background checks and we are talking about tax-paying and educated young people with clean records. Congress needs to act very soon to make this deferred action the law of the land. Let us never forget that we are a nation of immigrants."