For a couple of decades at least, state officials and Congressional representatives have put together studies and plans to improve New York's passenger rail service. The results have been lackluster.

Currently, trip lengths and reliability are major problems. Track conditions and outdated signal equipment often require trains to go slower than speed limits permit. And passenger trains often get stuck behind the slower-moving freight trains with which they share the tracks, which leads to delays.

But state and federal officials have identified some rail projects that would speed up the passenger trains and cut down on delays along the Empire Corridor, the Amtrak line that runs from New York City to Buffalo and Niagara Falls. And once again, they're getting ready to make a case for federal investment in those projects.

Their efforts are now centered on a study by the state Department of Transportation and the Federal Railway Administration. The agencies recently released an initial assessment of five potential passenger-rail project options. The agencies will accept comments on the assessment - which is a draft environmental impact statement - through March 24, after which the FRA will select an option for further review. Public comments and state input will factor into its decision.

The public will be able to learn about and comment on the options during a session on Friday, March 7, from 4 p.m. to 8 p.m. at The Strong National Museum of Play, One Manhattan Square. The hearing is one of six being held around the state

It's not sexy, but the environmental statement basically lays out the rationale for why the federal government should spend money on New York's passenger rail system.

"The Federal Railroad Administration has said that states need to go through this environmental process before there will be significant federal investment in rail corridors," says state Department of Transportation spokesperson Beau Duffy.

The main purpose of the study, he says, is to "get us ready so that we can fund these projects."

High-speed rail boosters have long argued that faster, more reliable trains would provide the state with economic and environmental benefits. But many travelers don't see the train as a viable way to get around. In many cases, cars are faster and more convenient.

Right now, the average trip from Rochester to New York City takes approximately 6 hours and 40 minutes, says the environmental statement. But faster trains travelling on dedicated tracks would shorten the trip time dramatically. The fastest option included in the transportation agencies' study would shorten the trip to 4 hours and 25 minutes. The tradeoff: the necessary infrastructure would cost $14.7 billion. Other options would cost much less, but wouldn't reduce trip times as much.

And money has long been an obstacle to improving speeds and reliability on the Empire Corridor. Any rail projects will need federal funding, which must be authorized by Congress. While many urban Democrats want it, conservative Republicans tend to view high-speed rail as a boondoggle. As a result, rail funding is a perennial battle.

"As long as we have the present House, we won't build anything anywhere," says House Representative Louise Slaughter, a longtime high-speed rail booster.

The public may think of high-speed rail in terms of the Asian and European systems, with trains that travel faster than any in the United States. But the vision laid out in New York's environmental assessment doesn't go that far. 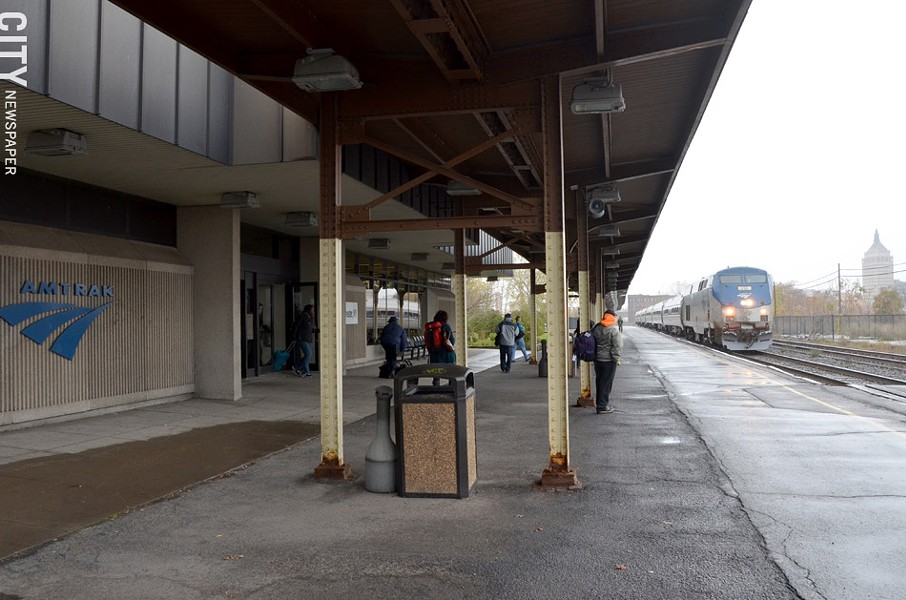 The fifth alternative includes $200 million worth of improvements already in the works, along with regular maintenance. It's essentially the status quo and would offer little benefit in terms of speed.

With the exception of the fifth alternative, all of the options would alleviate problems with the tracks, signal system, and congestion. Two of the five options call for a separate passenger rail track from Albany to Buffalo, which would help eliminate the passenger-freight conflicts and allow for either 90 or 110 mile per hour speed limits. The new tracks would parallel existing rails.

The 125 mile-per-hour option includes plans for a new cross-state corridor with electrified track. But that package has more drawbacks than the other proposals: it's expensive, would take a long time to build, and would require buying some land. And some passenger trains would continue to use the existing rail tracks.

Slaughter says state and federal officials should pursue the 125 mile-per-hour option. That option would generate the most passenger interest and would be particularly attractive to business travelers, she says.

"I don't want us to settle for something," Slaughter says. "I want us to have the best that we can get."

All five alternatives include the construction of a new train station in Rochester. The state is currently soliciting construction proposals for that project, which are due March 14. The contracts will probably be awarded in late spring or early summer, says the DOT's Duffy.

Whichever option is chosen, higher speed passenger rail will come at a price. Depending on the option chosen, projects could include new trains, facility upgrades, hundreds of miles of new track, and land purchases.

All of the alternatives except the status quo option have estimated costs of $1.7 billion to $14.7 billion. The draft assessment says the largest source of the money will likely be federal funding.

New York has spent a lot of money to encourage the use of rail in the state, particularly for freight, says Republican State Senator Joe Robach. If large passenger-rail projects are on the horizon, there should be "major federal participation" in the funding, he says. Robach is vice chair of the state Senate's transportation committee and, according to reports, is likely to be appointed chair.

But the last time Congress approved funding was when House and Senate Democrats passed the 2009 stimulus plan. The stimulus included $8 billion in grants for intercity rail projects, though many high-speed rail supporters had hoped for more.

President Barack Obama is trying to get new funding for rail operations and projects as part of his 2014 budget proposal. He wants $40 billion over five years, but with the polarized Congress, the odds aren't good.

But Slaughter says that if the government could find $2 billion a week to fund the Iraq war, it should be able to find money to invest in important domestic infrastructure like high-speed rail.

"We need to get some priorities straight here," Slaughter says.