The Joke's On Us Tour

I’ve learned from past experience that, if you want to talk to Lewis Black when he is calm, and displaying socially acceptable behavior, it must be in the morning.

But when I call him at his New York City apartment at 10:30 in the morning, I’m already too late. He’s been watching the impeachment hearings.

“You elect somebody who doesn’t, who never took a civics class,” Black says, his voice rising with his anger, “and then you’ve got a portion of the country THAT DOESN’T UNDERSTAND HOW THE GOVERNMENT IS RUN?”

Common decency has been lost. Those behaviors you were supposed to learn, maybe in Sunday school, Black says, where they tell you, “‘Hey, this the way you’re supposed to act, SO TRY OR YOU’RE GOING TO HELL!’” 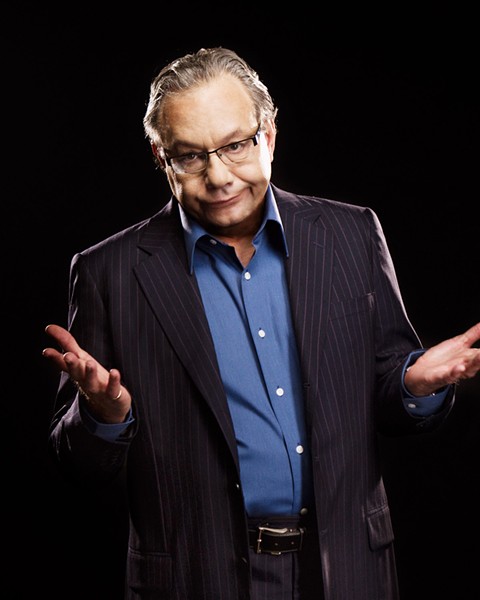 A slight pause, maybe for breath, or to head off a coronary embolism. “I’m sorry, it’s really unbelievable.”

Black, the comedian who is to anger management what chum is to sharks, returns to Rochester for an 8 p.m. Friday show at Kodak Center on West Ridge Road. His anger is familiar to us. Perhaps first from his appearances on “The Daily Show” with Jon Stewart. Stewart’s gone off to other projects, but Black still makes occasional appearances on the show. “They don’t put me on enough to do the kind of damage I think I might be able to do,” he says.

So he chips away at our fragile psyches with cable comedy specials and books and acting roles. On TV he has played a porn-film director and an entomologist, and he’s been the voice of Santa Claus on an episode of “SpongeBob SquarePants.” And for the animated film “Inside Out,” in which the voices of different actors depict a young girl’s emotions, Black was, of course, “Anger.”

He says he spends little time reading internet news sites, and his exposure to television news events such as the impeachment hearings is limited. He compares it to wallpaper, “I kind of float in and float out of it,” Black says. He prefers his news to be curated by professionals. “I still read papers, and I think it’s important to read a newspaper,” he says. “Because they’re the last place on Earth that apparently, when it comes to news, someone is in an office who gets a résumé, and, so they read the résumé and they hire on the basis of that.”

Black also says that he keeps Trump out of his show as much as humanly possible. “Because people are binge-watching it, no matter what side they’re on,” he says. “So I stay away from it because it’s too much. It’s the first time in my life that, I come offstage – the first time ever – where there are people who will say I talked too much about him or I didn’t talk enough about him.”

“I watched him here for 40 years,” Black says of his fellow New Yorker. “I said when he started to run that he’s good for comedy in the way that a stroke is good for a nap.”

Is there something that news organizations can add to their presentations that would help interpret these times? “Barnyard animals would be,” he says. “They show something, they show a clip and they turn to, like, a lamb, and they say ‘Lamb, political commentator, what do you think?’ The lamb goes, ‘Baaaa,’ and that’s the end of it.”

Black has defined himself as a socialist. And Americans have heard for decades that socialists are to be feared.

“All nine of us,” Black says. “Me and the other eight play softball on Saturdays when we can get a team together.”

And that’s Bernie Sanders on first base. Socialism, like all isms, is a dichotomy of intentions. “There are these two things that go on here,” Black says. “How are we gonna help people, and yet make all of the money we possibly can? And it’s a constant kind of a tension that occurs.” He recalls seeing the 1960 Edward R. Murrow documentary, “Harvest of Shame,” about migrant workers in America, “and it changed my life,” Black says. “This documentary about the people who get us our food and can barely get enough money to eat, and live in horrific conditions. And who wants to help them. And the only ones who want to help them are the socialists.”

Maybe Black is making his anger work for him when he lends his name to causes that fight cystic fibrosis or autism. Or the “Children of the Forest College Fund,” raising money to help kids in Thailand attend college. “It’s not that much money, $25,000 a year, and it sends a number of kids off to school,” he says, “And those kids come back to go to work in the village.”

But what can the ripple do against a tidal wave?

“This too shall pass,” Black says. “For every action there is an equal and opposite reaction.

“You go from Bush to Obama, from Obama to this? Seriously, you don’t think we’re going to go back? That is what we do.”

The 71-year-old Black believes his is the last generation to be trapped in today’s “bound-in nonsense.”

“It’s like Sisyphus, you know, the United States of Sisyphus,” he says. “We pushed the rock up to the top, nearly got it to the top of the mountain, and then a bunch of people together said, ‘OK, I’m tired,’ and let it slide to the bottom of the mountain. Now we’re pushing it up again, and we’ll get it up faster, because a lot of these kids aren’t burdened with that nonsense. It’s a lot of the reason gay marriage finally passed the Supreme Court, and they kind of went, ‘Oh…’ All of a sudden, you can’t argue with kids who have been born and raised and are now the first generation living proof that it’s not damaging, no matter what your religion tells you, and why we have separation of church and state because of that. Schmuck!”

Unexpectedly, Lewis Black has evolved over a 10-minute phone conversation into a different man. “I’ve always been an optimist,” he says. “I wouldn’t be screaming if I was a pessimist. I’ve always believed it could be better, and I believe it will be better. It’s like the Second Ice Age. These are dinosaurs dying, and these are their last screams.”

In tribute to tributes

Tribute shows are not confined to Rochester, but we do seem to have more of them than your average American city. The Bob Dylan Birthday Bash has been going on for a couple of decades, we’ve had celebrations for Johnny Cash, George Harrison, David Bowie, Joni Mitchell, Woodstock, Pink Floyd’s “Dark Side of the Moon” and The Band’s “Last Waltz.” There’s one coming up for Grateful Dead lyricist Robert Hunter on December 12 at Record Archive and another for Richard Thompson on December 28 at Abilene Bar & Lounge. I have witnessed people roll their eyes at the announcement of a new one. Why is this? I think they’re marvelous.

Next up. The Tom Waits Birthday Tribute & Repeal Prohibition Party at Iron Smoke Distillery in Fairport. They had one there last year. Dozens of local musicians doing Waits songs, from romantic crooning to discordant, antisocial, spoken-word murder ballads. This time around the sun, Waits gets two days. Thursday starting at 7 p.m. is the Repeal Prohibition night, celebrating the 21st amendment, which on December 5, 1933, brought an end to the unpopular anti-alcohol 18th Amendment, which had left America dry for 14 years. Friday at 8 p.m. is the Birthday Tribute for Waits, who turns 70 on Saturday. There’s a special $25 VIP ticket that includes drinks, a signed poster and a place to sit. Otherwise, admission’s $7, you can order them on the Iron Smoke Distillery Facebook page.

Waits, Dylan, Cash…we don’t really know these guys. Now, Joe Dady and Bat McGrath, we knew them. And for them, a different kind of tribute. Dady was one half of Rochester’s treasured The Dady Brothers, and passed away last spring. McGrath, a part of the amazing Rochester music scene of the late 1960s and early ‘70s, died in October. The tribute to Dady a couple of weeks ago at Hochstein Performance Hall, and McGrath’s tribute last weekend at Lovin’ Cup Bistro & Brews, were both standing-room-only. They weren’t sad affairs. They were upbeat, with moments of laughs, and a few hours of great music and memories.

Yeah, the arts might be at its best when it is forward looking. But do not let me catch you rolling your eyes at a celebration of great music and lives lived well.

Jeff Spevak is WXXI’s arts & life editor and reporter. He can be reached at jspevak@wxxi.org.