June 26, 2020
A virtual performance and interview with Rochester jazz musician Judah Sealy was derailed this week after internet trolls hijacked the event with a barrage of racist slurs and imagery. 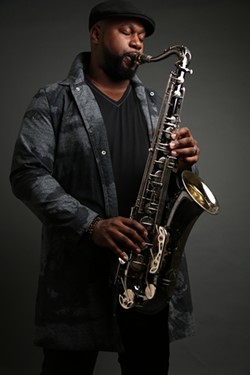 Sealy, who is Black, was about an hour into his appearance on DJ Sapphire’s Smooth Jazz Lounge, a Zoom series hosted by London-based radio personality Melanie Whittaker, on Wednesday when the so-called “Zoombombers” struck.

He was answering a question about COVID-19’s impact on musicians when an onslaught of participants suddenly infiltrated the call, interrupting the interview with racial epithets and mocking laughter. Overlapping voices with American and British accents could be heard throughout the profanity-laced diatribe, repeatedly saying the n-word and asking, “Is this the Ku Klux Klan meeting?”

The event was cut short when the video feed was hacked by a close-up image of a person in red, camouflaged-patterned head covering against an illustrated backdrop of torch- and gun-wielding Klansmen gathered around a burning cross and a Confederate flag.

“It’s haunting, and it’s violating,” Sealy said of the incident.

This kind of attack, known as Zoombombing, in which video conferences are disrupted with hateful, pornographic, or other offensive content, has grown in prevalence during the pandemic as Zoom became the default social platform for millions of people to connect while practicing physical distancing.

A community forum in April hosted by Rochester City Council member Mary Lupien, for instance, was commandeered by Zoombombers. Countless similar disturbances around the globe have been reported since.

Deepak Thettu, a friend and guitarist in Sealy’s band, was watching the event on Facebook Live when it was forced to shut down.

“I think a lot of people wouldn’t believe that this happened or it wasn’t as bad as it was unless you were actually there,” he said. “I think all of us were pretty traumatized after, ‘cause it was just like, ‘Seriously? Did that just happen?’ It was horrible.”

The event was offered to the public on Whittaker’s social media platforms and shared via Sealy’s Facebook page, so anyone who could view those accounts could access the meeting.

Whittaker, who is also Black, reported the incident to Zoom and said she plans to implement more security measures in future video conferencing events.

The incident has prompted Sealy to change his approach to future performances and interviews on Zoom. He said he would limit his appearances to one-on-one conversations, which could then be broadcast on Facebook Live or through other means.

“Unfortunately, being African American, it’s not new,” Sealy said. “When you think about it, a Zoom-infiltrated call is nothing compared to a knee to the neck, nothing compared to some of the things that a lot of people see on a daily basis. So I’m not trying to make it a bigger deal than it is, but to be confronted with that much hate in an environment that you weren’t expecting, where you thought you were safe, it’s still jarring.”

His Zoom appearance was recorded and Sealy said he agreed to share the clip of its unsettling conclusion with CITY to raise awareness of the stark reality of racism.

“People are going around violating different areas of our lives with this stuff, whether it’s our Zoom calls, our emails, our walks home from the grocery store,” he said. “Racism has infiltrated every area of our life.”

Sealy said he has no plans to slow down. He and his band will be performing on Facebook Live on Saturday, June 27 at 8 p.m., in lieu of the band’s cancelled Rochester International Jazz Festival concert scheduled for the same day.

His latest full-length album, “Legacy,” is set to be released in August.