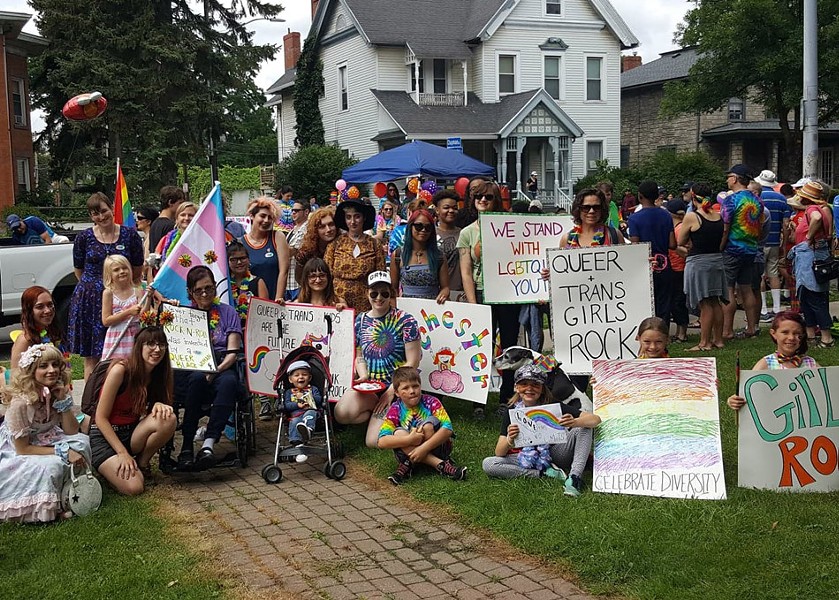 PHOTO BY AMANDA ASHLEY A group from Girls Rock! Rochester at last year's Pride. The organization is starting a new Queer Rock Camp this August.

PHOTO BY REBECCA WERKMEISTER Kaci Smith and a group of volunteers started Girls Rock! Rochester in 2011 and held the first camp in 2012.

PHOTO BY REBECCA WERKMEISTER Longtime volunteer Amanda Gripe will be teaching vocals at both Girls Rock! and Queer Rock this summer.

They did it all themselves. The band members, who only met a week ago, take to their instruments in matching shirts, sporting their new screen-printed logo. The audience goes wild as the band of girls and non-gender-conforming youth break into their original song. Anyone who has witnessed a Girls Rock! Rochester showcase has probably noticed the overwhelming sense of encouragement in the air and, in turn, confidence coming from the bands on stage.

Girls Rock! Rochester has been running music camps every summer since 2012, and in August, the group will start a new session: Queer Rock Camp. At the week-long camp, the voices of queer, gender variant, gender non-conforming, and allied youth, ages 12 to 18, will be amplified — literally — with microphones, guitar amps, boost pedals, and drum kits.

Kaci Smith, a musician and teacher, and a group of volunteers started GR!R in 2011. The camp is part of the larger Girls Rock Camp Alliance, which has chapters all over the world. Smith was inspired to start Queer Rock Camp after seeing that GR!R no longer felt like the right fit for some of the older participants.

"Even though Girls Rock is open to gender expansive and trans youth, some didn't feel like Girls Rock was for them," Smith says.

It is the goal of the volunteers, Smith says, to embolden and empower these young people to use their voices, taking what they've learned about self-acceptance, social change, and compassion with them beyond camp. And, Smith notes, there will be educational opportunities for the campers, like a social justice workshop led by KaeLyn Rich, Assistant Advocacy Director for Chapters of the New York Civil Liberties Union, and another workshop on self-love and identity acceptance.

Emma Forbes-Jones, a psychologist who specializes in gender issues, became active in helping organize the two camps after her daughter began attending GR!R. She believes that coming out as non-conforming at a young age can be isolating.

"I hope that kids find connection with each other and with adults who truly get them," Forbes-Jones says. "I hope that the kids find their voices and lift them together and realize how much power, both personal and communal, there is in this experience."

Over the course of a week, campers can pick up and learn an instrument, form a band, and write a song. Local musicians and members of the LGBTQ community will work with the kids to help bring each band to life. And the camp ends in an electric grand finale: the showcase.

Forbes-Jones says she's impressed with the climate at Girls Rock! Rochester and expects Queer Rock to be the same. "The camp really 'walks the walk' and goes beyond 'welcoming' and 'accepting' to provide an affirming environment for gender expansive kids," she says.

Queer Rock Camp starts Monday, August 6, and ends with a showcase on Friday, August 10. The camp will be held at First Unitarian Church, 220 South Winton Road. Full tuition is $300, and financial aid is available. Between now and August, Girls Rock! Rochester is seeking volunteers and donations, as well as accepting camper applications. More information can be found online at girlsrockrochester.org.