PUSH-ing back against loneliness amid social distancing 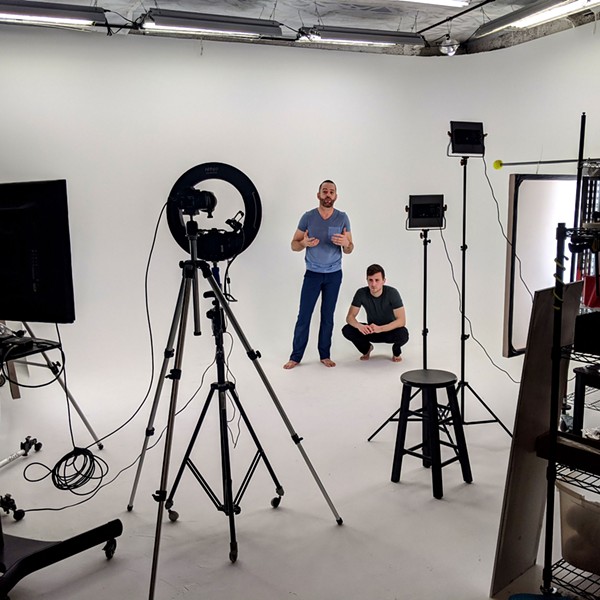 PHOTO PROVIDED In this new era of social distancing, PUSH Physical Theatre is helping assuage loneliness by creating instructional videos about what they do best — using athleticism, simple gestures, and soulful artistry to tell a story.

Until recently, practically no one had heard the term "social distancing." Now it's not only trending, it's a necessary way of life that is leaving many struggling to cope. Limiting human contact is the best way to slow the spread of COVID-19, health experts say. But many of those same experts recognize that denying our innate need for human contact — a hug, a handshake, a high five — may have long-term mental and emotional impacts for years to come.

A 2018 study by the National Institute for Health Care Management found that chronic loneliness can carry the same physical health risks as smoking 15 cigarettes per day and can increase the risk of death by 30 percent. It's that specific study that piqued the interest of PUSH Physical Theatre, which began working with seniors last fall through the Virginia-based Roanoke Arts Commission to help those cope with loneliness through movement and storytelling.

Now, the Rochester-based group is raising money to help others in this new era of social distancing by creating instructional videos about what they do best — using athleticism, simple gestures, and soulful artistry to tell a story.

"We come from the perspective that everybody has a story to tell, and many of our stories are locked up in our muscles and our bones, so when we move, we set our stories free," says PUSH co-founder and co-director Darren Stevenson. "When COVID-19 hit, suddenly all those people who are most at risk for isolation are suddenly even higher-risk."

The group's reach-out-and-virtually-touch-someone initiative went from idea to reality in the span of about a week. "From idea to choreography to completion, this is about the fastest we've ever done a project," Stevenson says. The group came up with the concept and began soliciting donations to raise $5,500 through its Facebook page about a week ago to help pay for video equipment and the performers' time. They began filming at Airigami's studios on Wednesday, March 18, and expect to post the first of at least eight videos this week.

The goal, he says, is to make these videos accessible for everyone, by making them free to watch on PUSH's YouTube channel, Facebook, and Instagram pages, but also by including modified movements so people of all ages and skill levels can participate.

"The idea is that you can watch a video in your house and do something today, learn some new skill. If you're an educator, then you can use these as a resource for students that you're trying to teach via a non-traditional method."

If PUSH raises enough money, Stevenson says they'd like to add a written resource guide for teachers, to accompany the videos. For that to happen, Stevenson estimates they'd need an additional $3,000.

As is the case for many other artists locally and across the country, work and money have dried up as the COVID-19 crisis worsened. Stevenson says this not only presents them with an opportunity to get creative, but also gives them the chance to really connect with audience that have come to see their performances.

"I prefer the idea of people who have seen our shows or watched our performance videos, can pick a move and say 'well, that was cool how they did that, I wonder how they did that.'" Stevenson says. "We want to teach you that."

He adds that by posting these videos on social media, he hopes to get comments from people about how they're using the videos and perhaps how PUSH can improve them. "By utilizing social media for these videos, what we're hoping is to create a community and a dialogue," he says.

PUSH is still figuring out new ways to teach physical theater and storytelling through movement, Stevenson says, including how to do it when you can't have a partner. Instead, he says they're utilizing inanimate objects, like chairs, as substitutes.

"The way we shrug our shoulders, the way we throw up our hands, the way we engage physically like that, and the way we put our arm on someone's shoulder to comfort them or hug them or shake their hand and say, 'this is going to be okay,' — that's really important," he says.

Stevenson says many young people who are out of school right now are being asked to engage in the social fight of their generation. He says while some are confused and frightened, all of them have a story to tell, and he believes they can benefit by expressing it through movement.

"When we come up against novel stressors — like this is, none of us have ever experienced something like this in our lifetime — we need to go beyond words."

To donate to this project, visit facebook.com/PUSHtheatre. There, you'll find a link to the donation page.

Artists and cultural orgs: How are you pivoting to online, streaming, or otherwise remote offerings during the epidemic shut-down? Send pitches and tips to the email below.

Kathy Laluk is a freelancer for CITY. Feedback on this article can be sent to Rebecca Rafferty, CITY's arts & entertainment editor, at becca@rochester-citynews.com.