Public art saved my sanity in 2020 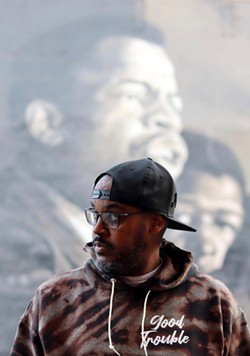 One afternoon last spring, during what appeared then to be the darkest and loneliest days of the pandemic, when nearly everything was closed and the infection rate was climbing quickly, I took a drive to the old Fedder Industrial Park on the east side of the city and just parked.

The exterior of the complex, a former factory on East Main Street that has become a repurposed refuge for artists, craftsmen, and creatives, is a canvas for some of the best street art in the city, if not the country.

I had come to see “Avery,” the towering spray-painted mural of a young woman that graces a brick silo on the site. She was created by the Canadian artist Jarus six years earlier, and her quiet confidence and beguiling beauty has yet to fade.
Being with her that day, admiring her against the backdrop of a soft blue sky and a silent city sheltered in place, a calm I hadn’t known for weeks washed over me. I was an “essential worker” and plodding to my workplace day in and day out in the midst of what was proving to be an insidiously intractable virus had taken a physical and mental toll on me.

I grabbed my camera, which was nearby, and fired off a few frames of “Avery.” It was then that I realized what I was doing, photographing public art, was my way of staying sane — and I don’t use that term lightly.

Since March, we’ve lived in a cosmos of uncertainty. While some people baked bread, knitted, read, exercised, and binge-watched TV to get by, I leaned into photographing the vibrant art in the public space around us. Later, sharing my photography with my community on social media became a way for me to offer others the light and hope that “Avery” had offered me that dreary afternoon.

I would come to call this ongoing exercise “social distancing photography.”

Whether you call it graffiti, street art, or public art, one thing is for sure: Rochester has a lot of it to appreciate. We have a robust scene, with some incredibly talented artists creating here year round, and visiting artists who parachute in and weave in work that becomes part of the fabric of our city.

Have you ever really looked at our city through the lens of public art? Cobbs Hill offers some of the best views, not just because of its elevation but because of the hidden gem in the woods just beyond the reservoir. Venture into Washington Grove sometime and you’ll see. My 12-year-old son and I walked what he called “the path” on dozens of occasions, each time greeted by new gifts from street artists and writers at the abandoned water towers at the top of the hill. I value every second of the extra time I get to spend with him up there, exploring and enjoying it together. Those trips provide the perfect trifecta of fresh air, exercise, and the experience of art.

During the last nine months, I’ve been fortunate to have had a front row seat from which I was able to document some of the most beautiful and powerful murals as they were coming to life in Rochester.

This summer, I captured the WALL\THERAPY work of Athesia Benjamin and Lucy Ray. After the death of George Floyd, I spent time with Shawn Dunwoody as he completed the “Enough” mural, led the charge for the Black Lives Matter street mural on Court Street, and worked alongside a team of volunteers for “The Empire Strikes Black” in the amphitheater of Dr. Martin Luther King Jr. Memorial Park.

I also chronicled Sarah Rutherford as she completed the installation of “Stories of Strength” on Exchange Street in partnership with Willow Domestic Violence Center. In October, there was the FUA Krew’s Daniel Prude dedication mural.

Closing out the year, I spent a week with Darius Dennis, Daniel Harrington, Jared Diaz, and Ephraim Gebre — the crew behind the inspiring, 3,000-square-foot “I Am Speaking” mural on State Street of the late Rep. John Lewis, based on a 1963 photograph by civil rights chronicler Danny Lyon.

I am so grateful to the artists who invited me into their spaces and gave me access to their work. I have also greatly appreciated the positive feedback and encouragement from people who follow what I do. Photography is about spreading awareness and sharing these important stories.

In a year of hardship, darkness, stress, and anxiety, photography kept me active and hopeful. But the public art saved me.