Mikaela Davis takes on her next psychedelic lullaby 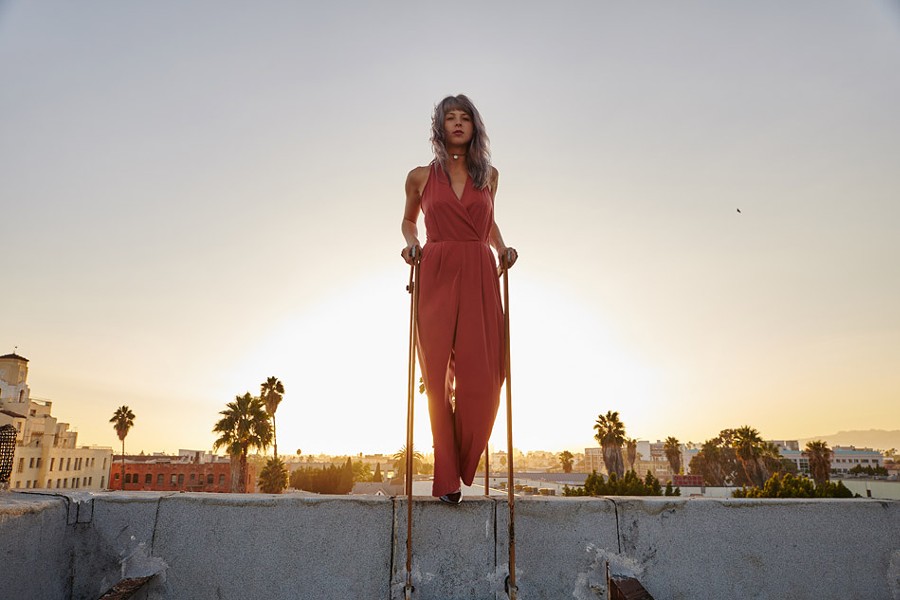 Mikaela Davis carves out her sound, awash in color, on a big sky canvas and in the heads of her fans. Her gentle voice delivers the particulars while her harp paints the theme. It's an indie rock twilight scene — or a psychedelic lullaby that puts you awake and allows you to dream. Addressing the 25-year-old Rochester singer and harpist's music as anything but achingly beautiful is impossible.

Davis has toured Europe a number of times, most recently as a support act with Bon Iver, and she and her band — drummer Alex Coté; bassist Shane McCarthy; and the recently added Alan Murphy on keys — pinball coast to coast in the US as well. Davis recently inked a deal with Rounder Records and has an album due to drop sometime in the spring, but Davis is coy with the particulars. We did get some answers when she stopped down to CITY HQ for an interview. An edited transcript follows.

CITY: How much does that harp weigh?

Mikaela Davis: It's not bad, really; probably around 90 pounds. And it's awkwardly shaped.

So it doesn't fit neatly in the overhead compartment?

I have to rent harps when I go to Europe.

I once saw you tell an audience to be quiet and listen. Given the gentleness of the harp, does that happen often?

No, that doesn't happen a lot. I think the reason that happened is we were at a brew pub and the sound was bouncing off the walls. Honestly, I don't care if people are talking when I've got the full band, but that night we had switched to an acoustic show — harp, mandolin, and guitar — and I asked people to be quiet and listen to the band, because we were playing quieter.

You're definitely not a typical bar band.

No, not at all. I tend to tour with people who have a super respectful audience, and they're used to listening.

The new cut "Little Bird" you released from your forthcoming album has no rhyme scheme.

I never noticed that. Cool. It was written with Alex Coté. He co-wrote four songs on the new album.

Typically, how do you write?

It's different every time.

Do you prefer writing with someone?

I like it better. I tend to come up with a lot of ideas, and when I can't finish those ideas, I get frustrated and throw them out. So now I try to recycle them and bring them to Alex instead.

What about the new record?

This will be my second full-length record. But I'm going to consider it my first album because I have a label now. I haven't really announced it, but people in Rochester can probably guess what's going on. I just put out the one song and didn't say anything about the record — so you can say there's probably a record coming next spring.

It's fuller than anything I've done. It's more rock than folk, I guess. In the past, I went through a phase where I was obsessed with sounding psychedelic and having a million sounds going on at once. It became a bit overwhelming, and I decided I want to go back to being more minimalistic: guitar, bass, drums, harp.

Related Mikaela Davis gets out of her own head: Harpist to play with Joywave on Saturday

Mikaela Davis gets out of her own head
Harpist to play with Joywave on Saturday
By Daniel J. Kushner
Music Features

Do you think you incorporate the harp backwards to other bands, who utilize it as an afterthought or spice?

I like to consider the harp as part of the band, as just another guitar. I don't want to make me playing the harp such a big deal. I'm a songwriter and I happen to play the harp.

How do you manage to balance between the fading sadness and a pervading happiness in your songs?

My songs tend to be personal, and I tend to write songs when I'm trying to work something out in my head or I'm just bummed out or depressed or something. Sad times make for good songs. I think I have a few songs that are happy. The song "Little Bird" is about my mom.

How do you like working in the star-maker machine?

The business aspect of the music industry is tough. I have a manager and a whole team. They're amazing. But it's hard when people are telling you, "You have to write this kind of song if you want to be on radio" or this or that. And to me, the whole reason I got into writing songs is because it was something I felt — not like, "I need to write this song so it can get 10,000 plays."

What's the easiest thing to do for you?

The easiest thing is the actual act of performing on stage with my friends, my band. We're just having fun.

What's the latest dream you've had?

I've been having really vivid dreams lately, stress dreams. In one, I'm trapped in a building and the world is ending. The land was getting crashed over by water. I was stuck, but I had my cat.