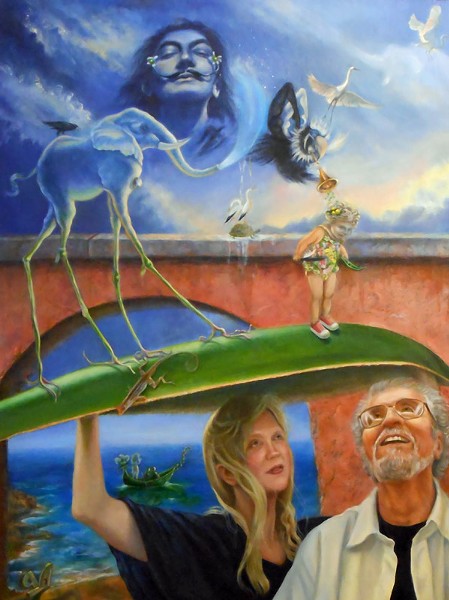 PHOTO PROVIDED Debra Stewart's "Two Peas in a Pod" is part of the proverb-themed group exhibit on view at Oxford Gallery through June 14.

The current show at Oxford Gallery is a group of 61 visual meditations on the sticky bits of aphoristic phrasing found within the language of our culture. These phrases, perhaps now cliché, trite bits, nevertheless contain gems of sense and are given new life and twists of interpretation by artistic hands.

Each spring, Oxford Gallery owner James Hall presents a themed group show. After setting this year's theme, "Proverbs and Commonplaces," Hall challenged more than 50 artists to create a work based upon an adage of their choosing.

It's a challenge in itself to come up with a theme that any artist — whether an abstract painter, a representational painter, or a sculptor — can tackle, Hall says. "I try to find things that are broad enough that anybody can find an approach to them," he says.

Hall had been reading a book about Flemish Renaissance painter and printmaker, Pieter Bruegel, while he was considering his list of possible themes. This book included the artist's famous painting, "Netherlandish Proverbs" (also known by other names, including "The Topsy Turvy World," which depicts a single street scene that contains visual allusions to more than 90 Flemish and Dutch proverbs, Hall says.

Hall left it up to each artist to prick a proverb. Some of the more well-known phrases were chosen by multiple artists who then illuminated the idioms in their own unique manner. For example, "A bird in the hand is worth two in the bush" was chosen by four different artists, each of whom answered the challenge differently.

Don Sottile's wood sculpture, "Duet," features a small bird gently alighting on the fingertips of a non-threatening, roughly-carved hand, while two others perch on a nearby carved tree. In Jean K. Stephens' tiny, richly-hued oil painting, "Bird in Hand," a wood mannequin hand cradles a small and lifeless brown bird, with ribbons of grasses winding elegantly throughout. Stephens' artworks consistently bless the eyes and fill the heart with a powerful reverence for minutiae and a satisfying sense of peace.

But more true to the original meaning of the saying, Doug Whitfield's realist-meets-cartoony painting, "Gatherer," features a distressed crow grasped by an overwhelming figure who is imagining a platter of cooked poultry. Sculptor Wayne Williams, who is best known for his masterful cast bronze animals, created "Pigeon Loft (Bird in the Hand)," a cast paper relief image of a seated man holding a bird, which explores a non-epicurean reason that feathered friends are valuable.

Continuing along the bird theme, Ray Easton's acrylic painting "Birds of a Feather" depicts a gathering of birds on a worn statue of an angel in a lichen-laden, damp atmosphere. "I think Easton's piece is a very imaginative approach to the proverb," in that the different birds have flocked to another winged creature, Hall says.

Showcased in a window display at the front of the gallery, Carolyn Edlund's "The Cart Before the Horse" is a photo-real trompe l'oeil painting of toy horse and cart which is so expertly rendered that it appears to be a collage. The uncomfortable visual imbalance of the composition truly drives home the point of the saying.

Several works in the show contain wistful meditations on time, that undeniable master of us all. Richard C. Harrington's oil painting, "Time is a River (Letchworth)," subtly explores the relentless fleetingness of moments as represented by moving water, here depicted as winding darkly through a landscape. David Dorsey's oil on linen, "Carpe Diem: Autumn's Last Flowers," is a rich capture of vibrant life, with bright white and orange blooms immortalized and glowing near a shining silver pitcher.

The root purpose of many of these sayings is to send sage advice traveling forward in time on our tongues. "Don't Put All Your Eggs in One Basket" is a chaotically colorful large oil painting by Kate Timm. Full of flowers, jelly candies, and a variety of eggs in baskets and nests, the whole scene is a vibrant interior set against a subtly present bleak, bright winter outside.

One of the few sculptures in a show dominated by paintings, William Keyser's "Learn to Walk Before You Run" is an acrylic-on-wood, stylish study in colorful, kinetic, fanning motion.

The human face and figure are utilized to express a number of well-known phrases. Leonard Muscarella's "Teresa IV (The Eyes are the Windows to the Soul)" is an oil-on-linen work of a captivating young model with extremely expressive eyes of shifting color. In Norine Spurling's watercolor, "Two Heads Are Better Than One," two little ones lean close together, focused and cooperating on a Jenga tower, the scene as faint as a memory or a faded photo.

In Daniel Mosner's oil painting, "Same as it Ever Was," a seemingly mundane domestic scene hisses with tension communicated through two figures' defeated postures as well as the body language of the alert dog positioned between them. Quite a different emotion is elicited by Deborah Hall's "Smile and the World Smiles with You," a lovingly-painted portrait of an elder with an open, kindly expression.