Protestors gather at City Hall to demand justice for Prude

Dozens of protesters calling for justice in the death of Daniel Prude marched from the Public Safety Building to Rochester City Hall Tuesday morning and stayed there into the evening.

They vowed to remain until they get their demands met for the firing and arrests of police officers involved in the March 23 mental health call where Prude — naked, unarmed, and in distress — was restrained by three officers until he lost consciousness. Prude was transported by EMTs to Strong Memorial Hospital where on March 30 he died. 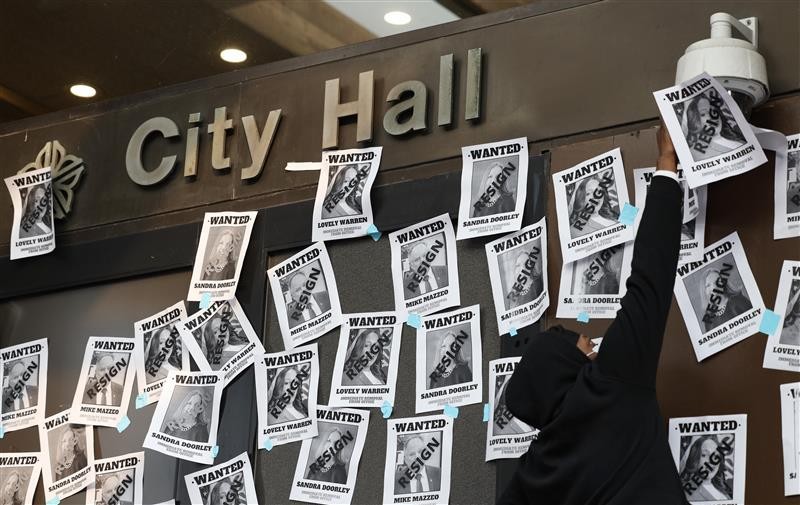 "Today we had peaceful protestors gather at City Hall to exercise their First Amendment right to free speech," read a statement from Deputy Mayor James Smith. "As part of this protest, no one was able to gain access to City Hall, so we decided to close at 11 a.m., since we were not able to fully conduct business. Employees left at that time without incident and those gathered outside continued to express themselves peacefully.

Prude’s death and the circumstances around it came to light earlier this month when activists and attorneys for his family released a complilation of police body camera video.

There have been protests every day since Prude’s death was revealed. Warren has taken several actions in that time, among them suspending with pay the seven officers present at the scene of the incident while state and local investigations continue.

Warren on Monday announced that she was firing Police Chief La’Ron Singletary, who had previously announced he would be resigning at the end of the month. The mayor said she made the decision after receiving a 300-plus page report prepared by Smith, based on his review of the actions taken during Prude’s arrest, and the subsequent actions taken by police and city officials. She also suspended the city's chief lawyer and communications director for 30 days, without pay.

Warren has also called for a federal investigation of the Rochester Police Department.