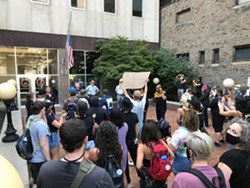 Stanley Martin, an organizer with Free the People Roc, said that Doorley’s policies are racist and hurt people like Daniel Prude, who suffocated in police custody during a mental health arrest in March.

“We are here to dismantle the system of mass incarceration," Martin said. "Sandra Doorley is at the head of that system in this county. So it only makes sense to ask for her resignation and have someone who understands that being poor is not a crime, being sick with a mental illness and substance abuse disorder is not a crime.”

Protesters march to DA’s office, call for Doorley’s resignation
CREDIT NOELLE E. C. EVANS / WXXI NEWS
Update Required To play the media you will need to either update your browser to a recent version or update your Flash plugin.

Protesters have previously called on Doorley and others to step down. Earlier this month, Mayor Lovely Warren fired her police chief, La’Ron Singletary. Seven of the officers involved in Daniel Prude’s arrest have been suspended with pay.

In a statement Monday afternoon, Doorley said that she has no intention to resign.