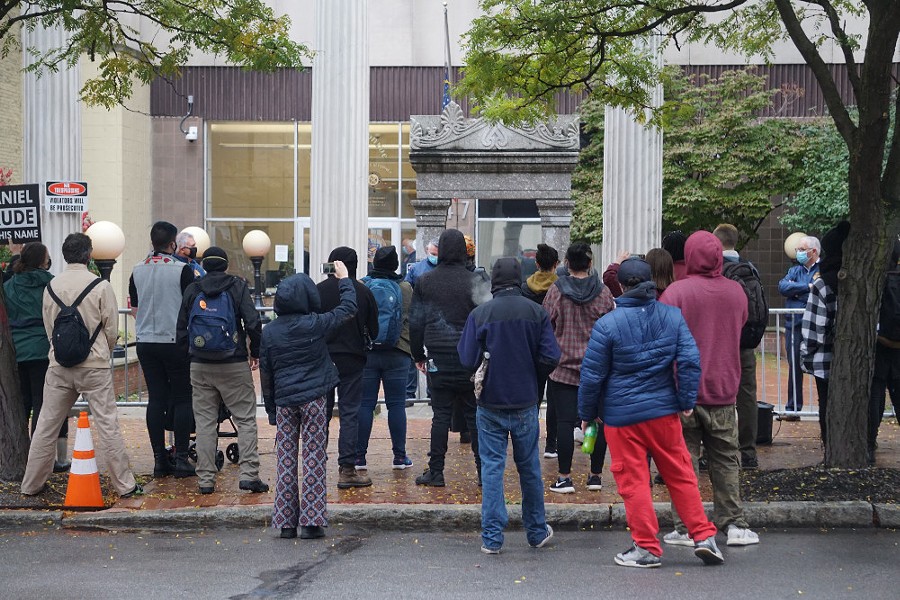 A few dozen protesters marched to the office of Monroe County District Attorney Sandra Doorley in downtown Rochester on Thursday, demanding both her resignation and that charges against protesters arrested in previous demonstrations be either dropped or reduced.

Organized by Free the People Roc, about 30 people marched from City Hall to the District Attorney’s Office on Fitzhugh Street. The demonstration was peaceful from both the side of protesters and police, and no arrests were made.

Organizer Ashley Gantt said the charges lodged against protesters who participated in previous demonstrations are egregious.

Jordan Hughes, 26, is one of those protesters. Hughes was arrested last Wednesday during a protest at the Public Safety Building, where police removed demonstrators from the building by force.

“I’m being charged with four felony assault of a police officer charges,” Hughes said. “One of which, I’ve learned now, is a guy who hurt his thumb in the process of jamming my face into the floor.”

Gantt said that arresting protesters only exacerbates people’s mistrust of police. She added that the charges don’t fit the scope of the crimes.

“Most of those folks are brown or Black, that have never, ever, ever, even been in trouble before,” Gantt said. “They’re facing felonies.”

In recent weeks, protesters from Free the People have marched on Sandra Doorley’s Webster home.

At one point during Thursday’s protest outside of Doorley’s office, Free the People Roc organizer Iman Abid-Thompson said, “We’ve been watching them. We’ve been reading their damn policies. We know your names. We know where your children go to school.”

Abid-Thompson said the police response to the protests against Doorley represent the root of Free the People’s grievances.

“From the protests in front of her house to the car parade that went by her home, to the protest we led right down into the courtyard in front of her office, there has been such an escalation by police,” Abid-Thompson said. “It’s because they don’t give a damn about us.”

Along with listing “the people’s demands,” a list of Free the People’s ultimatums which include the resignation of Mayor Lovely Warren and the arrest of the officers involved in Daniel Prude’s death, Gantt emphasized the importance of political action.

“We got to do work to do this, and we have to do everything at the same time,” Gantt said. “Period.”