PHOTO BY GINO FANELLI Demonstrators gathered at Jefferson Avenue and Dr. Samuel McCree Way in Rochester on Wednesday, Sept. 2, 2020, in remembrance of Daniel Prude.
News of the death of Daniel Prude following his arrest by Rochester police moved upward of 100 demonstrators to gather Wednesday at the Jefferson Avenue intersection where Prude was restrained by officers.

Through a downpour, they stayed, and chanted, "He died in the snow, we can stand in the rain," a reference to the light snow that fell the night Prude was arrested and stopped breathing in police custody.

By 8 p.m., a DJ had set up on Jefferson Avenue at Dr. Samuel McCree Way, blaring NWA and James Brown's "The Big Payback." Police blocked the surrounding streets to traffic with their cruisers.

Organizers said the demonstration would last all night, or as long as it takes for officials to meet their demands. Those demands include the firing of the officers allegedly  involved in Prude's death and a ban on police responses to mental health calls.

"This is just day one," said Adrian Hale, a manager who deals with strategic initiatives for the Greater Rochester Chamber of Commerce. "We're not stopping."

The demonstrators began their protest outside the Rochester Police Department headquarters on Exchange Boulevard early in the afternoon, shortly after relatives of Prude and a lawyer representing them released the details of his death during a news conference at City Hall. 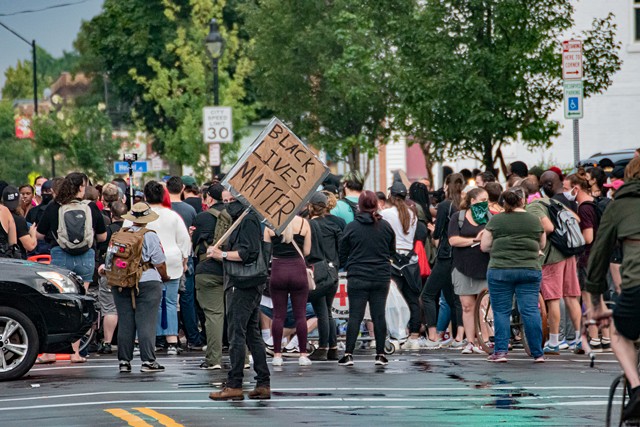 Police told civilians to leave the Public Safety Building as they set up barricades outside and officers carrying PepperBall guns positioned themselves within the perimeter. A growing group of protesters stood on the opposite side of Exchange Boulevard and shouted chants and condemnation at police.

At one point, an officer crossed the street and picked up a protester's backpack, shouted that it was "abandoned property," carried it across the street, and tossed it over the barricade. Protesters then moved up to the barrier, periodically kicking and rocking the gates.

Police responded with a volley of PepperBalls and pepper spray, firing at the crowd until it receded. Officers also came through the barricade and grabbed one protester off the street, carrying the man back into the Public Safety Building.

Rochester police officer tells activist she's being arrested 'for being an idiot'
News of the death of Daniel Prude sparked isolated protests in Rochester, leading to the arrests or temporary detainment of demonstrators.
By Jeremy Moule
News
Amidst the chaos, organizer Ashley Gantt, who was part of a group of activists arrested earlier in the day at the Public Safety building, was released from custody. She was met with cheers as she rejoined the crowd.

Gantt said there is a false narrative that Rochester doesn't have the policing problems of other cities. 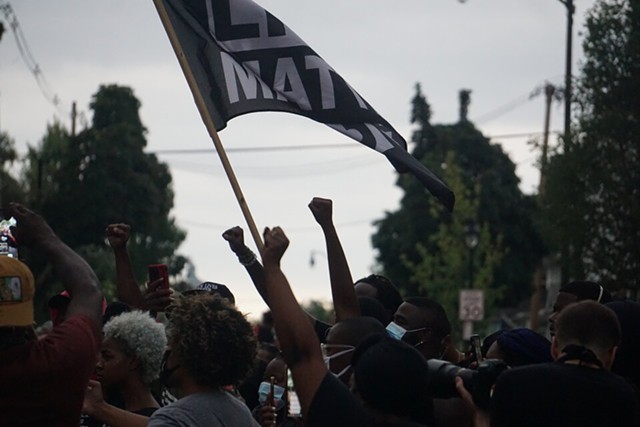 "We want the larger community to know this is not something that happens in other cities, in other states, it happens right here in Rochester," Gantt said.

Her statement appeared to be a veiled reference to comments Mayor Lovely Warren made about police-community relations in Rochester in the aftermath of the May 30 Black Lives Matter protests that descended into turmoil.

"By light years Rochester is ahead of the curve and we will continue to do what is necessary to make sure that our community feels safe and that our officers feel safe and that we can work in partnership," Warren said on June 10.

Warren knew of Daniel Prude's death by then, but said nothing of it. She claimed Wednesday that she was prohibited from speaking about it due to the parameters of a governor's executive order that mandated the state Attorney General investigate civilian deaths at the hands of police.

The order does not appear to restrict anyone from speaking publicly about such a death prior to the outcome of the Attorney General's investigation. Indeed, Warren spoke of the matter on Wednesday and Attorney General Leticia James said she was still investigating.

"The police chief, our mayor, and the president of the police union Mike Mazzeo knew this had happened when they made the statements that we are not Minneapolis, our city doesn't have these problems," said City Council member Mary Lupien, a frequent critic of the mayor. "They knew, and they need to be held responsible."

The protesters grew in number throughout the afternoon and by evening had migrated to Jefferson Avenue and Dr. Samuel McCree Way, where officers encountered a naked and distressed Prude on March 23.

Daniel Prude was suffocated by Rochester police, his family says
Two months before George Floyd's death at the hands of Minneapolis police touched off nationwide protests, Daniel Prude allegedly died in a similar manner in Rochester.
By Jeremy Moule
News
Police reports and body camera footage of the incident show that three officers restrained a handcuffed Prude in the roadway by holding down his feet and head and applying pressure to his back with a knee.

While officers restrained him, Prude fell unconscious and stopped breathing. He died a week later in Strong Memorial Hospital, from which he had been released after a mental health evaluation only hours before his arrest.

The Monroe County Medical Examiner determined Prude died of “complications of asphyxia in the setting of physical restraint due to excited delerium due to acute phencyclidine intoxication,” an indication that Prude might have been high on PCP.