In the early hours of the morning on Saturday, June 6, a team of volunteers will covertly install protest art in various urban and suburban areas of Rochester, meant for people to stumble upon when they venture out this weekend. The work was created in support of the Black Lives Matter movement by volunteers at the Highland Bowl amphitheater on Tuesday, June 2. Some of the volunteers were strangers before that event.

Dozens of people came and went on Tuesday from noon to 8 p.m., either dropping off artwork or sitting at a distance, masks on, using donated art supplies to create portraits of black people, or posters with slogans and quotes from black writers and orators including Audre Lorde, Dr. King, and Frederick Douglass. The posters read: “Stop Killing Us,” “Say Our Names,” and “There comes a time when silence becomes betrayal.”

The creators of these portraits and signs were not getting ready to join one of the many BLM actions that have been held in the past week, nor one that’s upcoming. They were answering the call to participate in a protest that’s not tethered to a march or sit-in.

Some participants learned the art-making event was happening ahead of time from a widely-shared post on social media, while others simply saw the gathering from the road, stopped to check it out, and were invited to stay and make something.

Less than a week later, those artworks have been reproduced into stacks of prints which will be divided up and installed as mini outdoor “galleries” around town overnight.

Unexpected art, seen from afar in one’s environment, has the tendency to draw the viewer in for a closer look, and there they will find fliers with the name Project A.I.R., information about its objectives, and details about where to find more information.

The initiative is the brainchild of 22-year-old Fairport native Alexa Guzman. Her main co-collaborators are her sisters, Aja (age 28) and Aliya (age 18), as well as a network of family and friends. 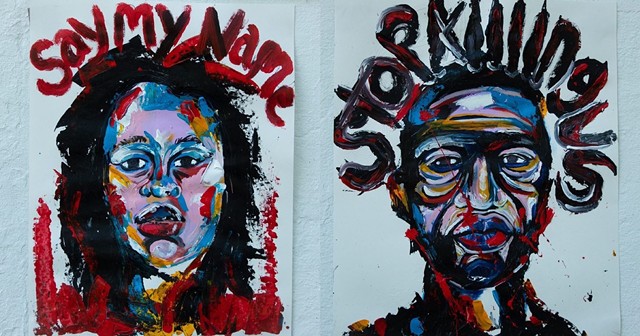 The nameless art party, which Guzman called “phase one” of Project A.I.R.’s nameless initiative, evolved from a case of missing-out she experienced last weekend. She wasn’t able to attend Saturday’s Black Lives Matter protest, and by Sunday she had resolved to host her own event.

Guzman, who earned a degree in chemistry from Syracuse University, is a poet and has event-organizing experience as a member of Nu Rho Poetic Society.

Familiar with the universal language of art, she decided to create artwork and signs to hang up in Rochester, and to ask for the assistance of family and friends so there’d be a higher volume of BLM-inspired work to put up. Guzman made an invitation for artists of all skill levels to make BLM art, and posted it on her personal Instagram story. It was shared by people who follow her, and then people who follow those people.

Once her call for participants began to get reposted, her inbox filled with people reaching out to her for more information. “I was fine with that, I just had to adjust my vision,” Guzman said. “I thought, ‘Let’s make this as big of a thing as people want it to be.’”

She says she originally figured she’d have the support of about 20 people she knew, but within 48 hours she found herself hosting what felt like an impromptu mini-festival. Guzman estimates that close to 85 people came and went during Tuesday’s 8-hour art-making party.

She chose a long stretch of time to allow for people’s work schedules, and to avoid a gathering of too many people at once, considering the pandemic. Everyone was asked to wear masks and maintain physical distance from those outside the groups they came with.

Guzman describes the event as having taken on a festival-like tone — aside from art-making volunteers, musicians Eury Rosario (another Fairport grad), Modyst Vibes, and Dope Simmons volunteered their time for live performances. Guzman gave a poetry reading.

Snacks, water, and art supplies were purchased with money from donations to a Venmo account Guzman had set up as interest grew; donations have surpassed $2,000 and the account is still receiving funds for printing and other costs.

Non-artists also reached out to offer their services. “We had an EMT, we had a security guard for the event,” Guzman says. The people behind the @BLMRocNY account on Instagram sent more volunteers. Rochester Contemporary Art Center also reposted the call for volunteers.

“I’ve never felt so connected to Rochester, ever in my life,” Guzman said.

People approached her to ask what organization put the event on. “It’s just me,” she told them.

“So I started thinking, ‘I need to make this a thing, an actual organization,’” she said.

“Not everybody is physically able or wants to go out and join a protest,” she said. “But they still believe in the movement. So I thought, ‘Can I make a space for those people?’”

She was also concerned with safety. “I have nothing against the more aggressive protests,” Guzman said. “But I wanted to create something that my friends and family could be involved in, and I know how those protests — even if they start off as peaceful — are met by the police.”

Feedback from participants during Tuesday’s event told Guzman a few things. An important one, she said, is that it had therapeutic potential, particularly for the younger volunteers.

An RCSD teacher from the neighborhood who attended with his own children echoed this sentiment. “He said kids have a lot of emotions about what’s happening but don’t know how to get that out, and events like this would be beneficial to them,” Guzman said.

“Phase II” of the initiative is tonight’s covert installation of the mini-galleries by volunteers Guzman vetted herself. The artwork and posters created at the Highland Bowl event were mass-produced as prints, and will be installed in about a dozen places in the Rochester region before dawn.

Guzman explained why she’s including the suburbs as well: “I feel like a lot of people are for the movement in the city, so we felt it was also very important to get the message out there for people who aren’t aware or are not in the middle of things.”

The goal is to generate talk and increase visibility of support for the BLM movement, outside of the protests, she said.

Later in the month, Project A.I.R. is planning to have an indoor gallery exhibit of the original artworks paired with a discussion forum. Guzman said in the future, she wants to repeat the Phase I and II process to keep the issues visible and folks engaged.

This story will be updated on Saturday with images from some of the installations.