Among the austerity measures tucked into the proposed city budget released last week by Mayor Lovely Warren was the elimination of funding for lifeguards and other measures that support swimming on the beach.

Last year, the city allocated $133,200 to the beach, but excessively high water levels kept the city from authorizing swimmers to take to the water. This year, that money has been “eliminated due to budget constraints,” read the spending plan proposed by Warren.

“We are not going to open the beach for swimming,” city spokesperson Justin Roj said. “It was not opened in 2019 as well.” 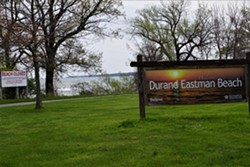 Closing the popular summertime destination to swimmers was among the $22 million in year-over-year spending reductions in the proposed budget, which calls for layoffs, furloughs, and work-share arrangements to help narrow a deficit exacerbated by the novel coronavirus health crisis.

City Council is expected to vote on the budget on June 16.

Word that Durand Beach would be closed to swimmer was posted in the Facebook group “Seabreeze Living,” where neighborhood residents expressed mixed reactions to the news.

While the ban might deter some swimmers, they said, it won’t stop everyone intent on taking a dip from going in the water. Last year, swimmers could be spotted at Durand despite the closure.

“Not having life guards at Durand has never stopped anyone from swimming there,” said resident Tony Zanni. “Just like there's no swimming on the small public beach next to the Irondequoit Bay Pier. When it's 95 degrees out and people need some relief, they are going swimming.”

Regardless of the pandemic, people are taking to the outdoors as the weather warms. The parking lots at Durand Beach were dotted with cars on a recent  afternoon.

Neighborhood resident Lianne Adams was disappointed that the beach would not be officially utilized for a second consecutive year.

“People are there all the time!” Adams said in response to the post. “It’s so odd that we’re surrounded by water and instead of building it up into something great, like most places do to earn revenue and generate interest/money, it’s banned and deemed unusable.”

Resident Lynn Scardino Cole said people will continue to come and hoped the city would maintain the beach.

“Just hope they do garbage pick up or it will get bad,” Scardino Cole said. “Not everyone takes their trash with them. Swimming will still occur, it always does.”