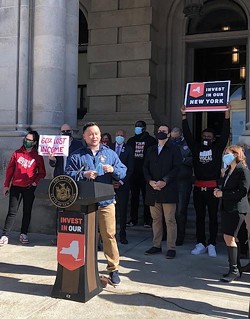 Progressive Democrats in the state Legislature took a victory lap after passing a budget that achieves many of the groups’ long-term goals, including a substantial increase in taxes on the wealthy and the fulfillment of a 15-year-old court order to fully fund New York's schools. Meanwhile, Gov. Andrew Cuomo, embroiled in several scandals, put the best face on items that did not go his way.

Progressive advocate and director of Invest in Our New York, Rebecca Bailin, spoke at a rally held in the April sunshine outside the Capitol, just below the windows of Gov. Cuomo’s offices.

“It’s a beautiful day to tax the rich!” Bailin said.

Many of those who spoke at the rally have had run-ins with Cuomo, including Assembly member Ron Kim, who accused the governor of bullying him and threatening to destroy him, which Cuomo has denied. Kim said the $4.3 billion in higher personal income taxes for New York’s millionaires and billionaires, and a hike in the corporate franchise tax, will help correct income inequality.

“We took a couple steps toward liberation this week,” Kim said. “That’s what this budget is about.”

State Senate Deputy Majority Leader Mike Gianaris, who has had a long running feud with the governor, said that he and the others have not given up on proposals to implement a higher capital gains tax and an inheritance tax on large estates.

“We’ve only just begun,” Gianaris said. “So strap in and get ready because we have a lot more work to do.”

State Sen. Robert Jackson celebrated the fact that the plan will fulfill the 2006 court order in the Campaign for Fiscal Equity case to fully fund the state’s poorest schools. Jackson was a plaintiff in the original suit nearly 30 years ago.

“Whether you’re rich or you’re poor, everyone is guaranteed the opportunity for a sound basic education in New York,” Jackson said. “That’s what the constitution says they’re entitled to, and that’s what this struggle has been about for years.”

Cuomo opposed the additional taxes, saying the rich will leave the state; he also argued that he had already fulfilled the court order on schools and did not need to spend more.

The governor was weakened during budget negotiations because he has faced several scandals, including allegations of sexual harassment and creating a hostile work environment, as well as a federal investigation into whether he hid the number of nursing home deaths during the COVID-19 pandemic.

One of several women who has come forward about Cuomo's behavior gave new details of her allegations to the Albany Times Union Wednesday, saying that the governor groped her at the executive mansion. She also said that he threatened her to keep quiet.

Cuomo's attorney, Rita Glavin, said, in a statement, “The people of New York know the Governor — he has spent 40 years in public service and in the public eye. He has repeatedly made clear that he never made inappropriate advances or inappropriately touched anyone."

Glavin said the Attorney General’s ongoing review of the claim and others must be allowed to conclude.

The final budget more closely resembles what the legislature wanted more than what the governor desired. 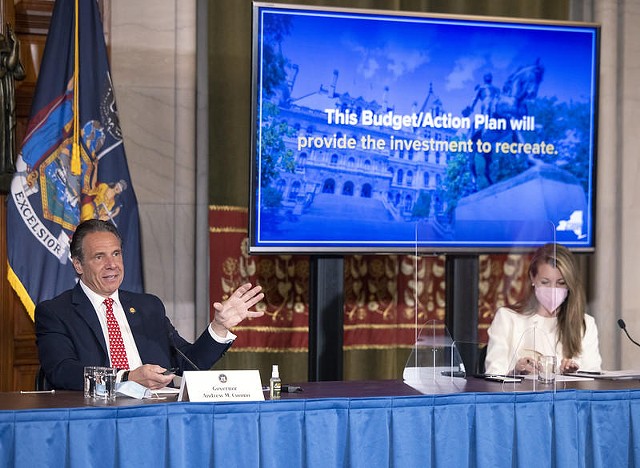 Cuomo, in a 70-minute presentation on Zoom, offered his take on the spending plan, praising rent relief for tenants and grants to small business hurt by the pandemic.

“This budget is certainly the most robust, most impactful, most important budget that we have done in this state, I believe, in modern history,” Cuomo said.

He said he’s not concerned with the higher taxes on the wealthy, because he believes that Democrats in Congress will work with President Joe Biden to repeal the imposed cap on deductions of state and local taxes, known as SALT, imposed under former President Donald Trump. A repeal is not certain. House Speaker Nancy Pelosi has said she’s sympathetic to the idea, but Biden spokesperson Jen Psaki said if Democrats in Congress want to end the cap, then they have to come up with a way to pay for it.

Cuomo is putting the brakes on a $2 billion legislative program to give stimulus checks to undocumented workers who were unable to obtain the federal monies. He said he’s worried that the undocumented workers will commit fraud, and wants State’s Comptroller Tom DiNapoli and Attorney General Tish James to review the program first. Until that happens, the governor said, "we won’t implement the program."

A spokeswomen for the Attorney General said James is “reviewing” the request.

The legislature clipped the governor’s wings in his proposal to build 10 new office towers around New York City’s Pennsylvania Station, including one that would be taller than the Empire State Building. The governor will be limited to using the $1.3 billion earmarked for the project to improve train transportation underground.

Cuomo said the plan, which includes revamping airports and Thruway rest stops, will still have a major effect, especially when combined with other infrastructure proposals.

“It will be large,” Cuomo said. “Because we need large-scale development.”

In a limited question-and-answer period, the governor was asked whether he feels the scandals he’s facing weakened his negotiating power during the budget. He did not directly answer, but said he’s had a good working relationship with the legislative leaders. State Senate Majority Leader Andrea Stewart-Cousins has called on him to resign, Assembly Speaker Carl Heastie has authorized an impeachment inquiry.

Cuomo concluded the briefing with a remark that could be open to a wider interpretation.

“Don’t bet against New Yorkers,” he said. “You will lose.”

Republicans, the minority in the legislature, criticized the budget as taxing and spending too much. State GOP leader Nick Langworthy, in a statement, said the spending plan will contribute to the “accelerated decline” of the state.