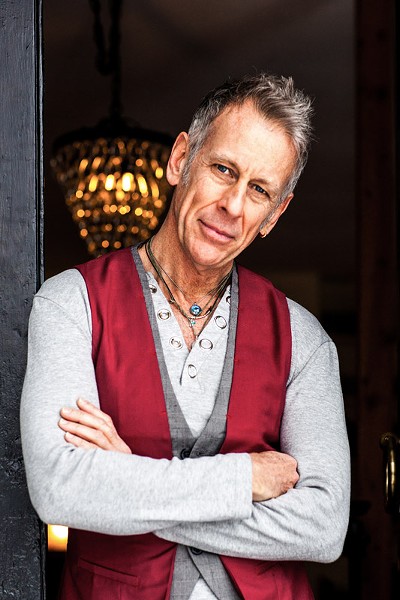 As a teenager in Rochester, Joe Locke was studying drums and piano when his mom saw an ad for a vibraphone in the newspaper. She bought it and launched a career that has taken Locke to the top of the jazz world.

"I can still remember being in my bedroom on Park Ave practicing the vibes," says Locke. "There was never a guarantee that any sound I made with that instrument was going to go any further than the four walls of that bedroom, so the fact that people know my work is a tremendous honor for me."

Locke has taken his vibes all over the world, but Rochester is still special.

In 2016, when he was inducted into the Rochester Music Hall of Fame, he said that he'd always been jealous of musicians with a sense of place in their music.

"In the music of Jan Garbarek you could hear Scandinavia. In the music of Pat Metheny you could hear the Midwest. In the sound of Stanley Turrentine you could hear Pittsburgh," Locke says. "It wasn't until late in life that I realized I actually did have a sound of the place where I came from and it was Rochester. That was very emotional to me. It's almost like in 'The Wizard of Oz' where you knew how to get home all along."

Locke's professional career began at 15 when his friend's stepdad asked if he wanted to go to a jam session at Jenks and Jones Lounge on Genesee Street. They loaded his vibes into a pick-up truck.

"In 11th and 12th grade, I was a kid and a student during the week and I got a steady job playing with much older musicians on weekends," Locke says. "I remember feeling rather schizophrenic because I was playing in this very adult club on Genesee Street and then trying to be a student. The life I was living was a fast adult life. Smoking and drinking was a part of that."

"In Rochester at the time there was a black jazz scene on Genesee Street and Jefferson Avenue, and there was an Italian jazz scene. They would overlap, and I was a product of this very fertile environment, keeping my ears open and learning from older musicians."

Locke also studied theory and composition at the prep department at the Eastman School of Music.

For decades, top vibes players like Lionel Hampton and Bobby Hutcherson used two mallets. From the beginning of his career, Locke has stood out with his mastery of the four-mallet technique.

"It's always a compliment when I'm told how comfortable it looks," says Locke. "It feels second nature. I'm so comfortable with four, it's hard playing with two. My aim is off and my balance is off when I play with two. It's all muscle memory."

The technique is now common, and Locke has seen a blossoming of musicianship on the instrument.

"I really need to keep my game up because this is the first time the vibraphone has caught up to other instruments in as far as the level of expertise," Locke says. "When I moved to New York there were incredible sax players, incredible piano players, incredible guitarists, but very few vibes players, and most of them didn't play very well. Steve Nelson and I were the only ones on the scene."

At the Jazz Festival, Locke will play with Ridl, Cohen, Sarkisyan, and a couple of surprise guests.

Aside from his dazzling speed and skill, it's Locke's brilliance as an improviser that has set him apart.

"I've tried to take the language of the great linear improvisers, saxophone players like John Coltrane, Joe Henderson, and Sonny Rollins, and apply it to the vibes," Locke says. "Hopefully it's really soulfully imbued but also with a lot of intellectual rigor.

"I wanted to try to achieve a style of playing that would excite other people hearing it, just like I was excited when I heard Michael Brecker, Joe Henderson, or Sonny Rollins play. I want to do that on the vibraphone."

And there's one more thing: Locke is visually exciting, dancing his way over the vibraphone.

"It's not conscious at all. It's just the joy of playing," he says. "I live in a dark place a good amount of the time. I definitely suffer from dark moods. It's my expressing that joy, where the clouds part and I'm experiencing joy of music-making in the moment."