By appointment only, call 218-9124 or email info@deborahronnenfineart.com

"The idea was to have artists who work in pattern, but also to think about thought," Ronnen says. Here, "pattern" means both repetitive visual sequences as well as the thought processes that "manifest themselves through imagery, process, concept, and title," she says.

New York City-based artist Erica Baum's work formed the genesis for the show concept, and constitutes nine prints in the exhibit. The selection of Baum's work comes from a few different series, which are united by her knack for deriving new possibility from the seemingly mundane and finite.

For example, her "Dog Ear" series of archival pigment prints were created by scanning and enlarging the corners of book pages that she had folded down, which yielded "fortuitous, ordinarily overlooked juxtapositions of words," Baum said in a 2013 interview in "Art in America."

From Baum's "Dog Ear" series, Ronnen is showing the 2010 print, "Not to Wear Stockings," the title of which comes from phrase that appeared when a page corner was turned down. The full phrase: 'Your sister is not to wear stockings," straddles the two pages, part of a block of text set at right angles to one another. Baum says the series has "an extremely high failure rate; not just any fold will do." 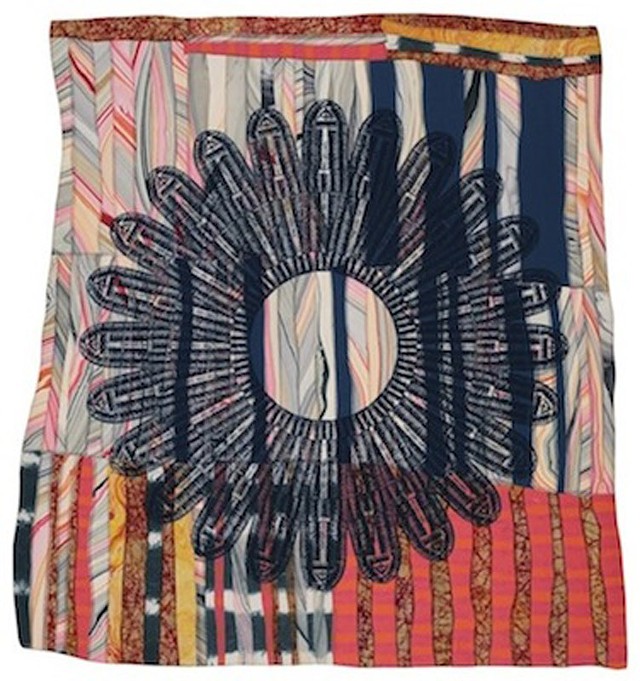 These fascinating little secret narratives exist in a state of hidden potential until the right person realizes it.

Baum's other work follows this "found" realities mode of seeing and documenting happenstance. Her "Naked Eye" series is represented in this exhibit with five prints, including "Pamela." Here, Baum has fanned the pages of cheap, photo-illustrated paperbacks from the 1950's-1970's, and photographed the interiors. What results is a series of slivers of text and imagery, bisected vertically by the colored edges of the pages.

There's an ephemeral and nature to the work -- "each spreading of the pages would produce an entirely different picture," Baum says in the Art in America interview. It's also unrepeatable. In "Pamela," neon red edges divide time-yellowed pages, images of tree branches, and a photograph of a woman gazing off-shot.

Because of the angle that the pages are held, the images appear distorted. Before I learned of Baum's process, the distortion of the figures and the disruption of the vertical lines reminded me of a glitchy analog video or something of that sort.

"There's a great deal of humor here, it's very poetic, and at the same time it's minimal," Ronnen says. There's a story available through this abstraction, and every viewer will construct the meaning differently. "There are artists who want to dictate what you see, but that's not this work," she says.

"All of the work has two layers," Ronnen says. Text and script are repeated in neatly arranged blocks, derived from his address books, which he's kept for 50 years, as well as images of his birth certificate, which identifies him as "colored." Binion has divided the lines of language with colorful markings made with paint sticks, and the overall effect alludes to agricultural rows as seen from above.

This mark-making comes from a whole childhood of working in the fields, Ronnen says. "And then he breaks through that, into the New York art world." The address book fragments name-drop famous friends: Sol LeWitt, Bill Jensen, Al Loving, and others. 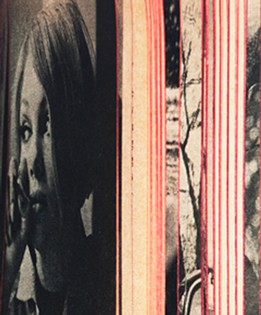 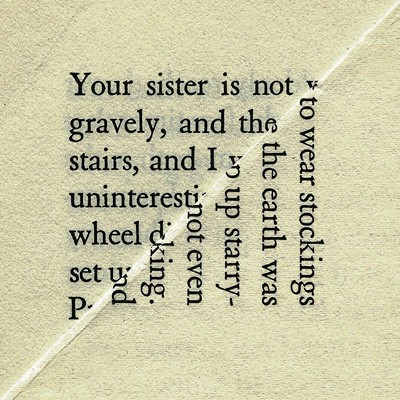 The work of New York City-based, multi-media artist Sanford Biggers is represented in three engaging pieces that combine paper collage, silkscreen, and hand-coloring. His subject matter and imagery are both ethereal and heavy, with titles that often allude to both Buddhist and socio-political concepts.

For example, in "The Floating World: Lotus," a central flower's petals are formed from the shapes of slave ships, adding a heavy layer to the concept of floating, and referencing that these ships, floating on the sea, were for a time the entire world to their occupants. And like a lotus rising from the mud, the flower of this fleet of ships has its roots embedded in the murky territory of unanswered atrocity.

Ronnen has versions of Hernan Bas's aquatint print, "Revised Endpapers for the Homosexual Neurosis" in both pink and blue. The work is reminiscent of pastoral toile, with a repetition of varying vignettes of just-pubescent, wingèd boys exploring and resting in natural settings.

These boys are on the threshold of sexual awakening, meditative while waiting for their wings to dry. The emotional inner world of boys is as uncommon a subject matter in contemporary art as it is in contemporary politics -- their sensitivity and vulnerability are not as protected or encouraged as that of girls, to our mutual detriment.

In Bas's "The Difference Was Clear," a youth sits amid plants, staring rather forlornly up at the sky. Bas's smart exaggeration of his arm length, descending from slouching shoulders, paints an acutely awkward picture of a brooding adolescent who hasn't fully grown into his body.

Kiki Smith's 2015 intaglio print, "Esperanza," is a fitting name that also means "hope." The work is comprised of a grayscale and prismatically-pastel version of the nearly the same image of rainfall. Layered and atmospheric, both scenes have a depth that is disrupted here and there by iridescent raindrops of hologram paper and mirrored Mylar.

Smith's dreamy print has an almost ineffable, living quality to it, and insinuates two ways of looking at the exact same thing. While the upper, gray portion has a calming, Zen quality, it also contains the gloomy associations with an overcast sky. But rain is life, says the lower half.