"Echoes of the Past"

PHOTO PROVIDED Barbara McPhail's monoprint, "Fire and Ice," was inspired by Karen Kunc's 2012 color woodblock, "Glacial Moment." Both prints are on display at RIT's University Gallery, as part of "Echoes of the Past," the Print Club of Rochester's 85th Anniversary Members Juried Exhibition.

In the tradition of creating artwork "after" existent artwork, the Print Club of Rochester's 85th anniversary members' juried exhibition, "Echoes of the Past," presented participating artists with the opportunity to create a new work in response to prints collected in the club's archives. The resultant show of 30 prints is currently on display in RIT's University Gallery.

"Echoes of the Past" reflects the ongoing efforts of the Print Club of Rochester to recognize a paradigm shift in how prints are considered, says artist and club president Adam Werth, who also has work in the show.

"From the beginning, this show was going to be a fun surprise for me because none of the prints had been created yet," says Ellen Heck, a North Carolina artist and the show's curator. "I didn't even know which images the selected artists would choose from the archive. With so many unknowns, I looked at the candidate pool, which was strong across the board, and tried to find consistency within individuals' work and themes arising from the group as a whole."

Heck says she chose the 15 artists by a common, subtle sense of narrative, interest and care in composition and borders, and the visibility of the artist's hand, "all of which has carried into this show."

The participants in this exhibition "have employed a variety of techniques in order to create a dialogue between the concrete historical past and a new image that represents a hybridized re-contextualization of the image in the present," Werth says. "The past is a constant reflection of the future and the present is where the two intersect."

Founded in 1930, the Print Club of Rochester is one of the longest continually running print clubs in the US. Each year, the club presents an exhibition print from a working artist, and this archive provided the selected members with a wealth of inspiration.

The influence each new work drew from an older print is more visually overt in some pieces than others. Dale Klein's monoprint "Charlotte Pier" — a dreamy departure from her industrial and portraiture subject matter that I'm more familiar with — keeps the lake-side theme from her inspiration, Paul Resika's 1999 etching and aquatint "Boathouse with Mast." Klein retains not only the forms, but the cool moonlit quality in the former print.

Allen Lewis's 1947 engraving "Design with Tree and Horse" is a simple scene with a grazing equine in the shelter of a storm torn tree, with a series of lines darkening half the page and birds hurtling in the sky to indicate an oncoming storm. From this work, Elizabeth King Durand created "Tree and Horse," using ImageOn intaglio, stencil, chine-colle, and trace monotype techniques to create an icy, densely atmospheric take on the former print in three phrases.

The allusion to Thomas Bewick's diminutive 1959 diptych engraving, "The Cur-Dog" in Werth's largescale digital print "Quadrupeds" is smartly subtle but beautifully effective. Standing back from Werth's work, you see a prismatic series of patterned planes layered in space. But as you approach the work, the pattern resolves into the repeated form of Bewick's dog, digitally stamped over and over and overlapping one another.

Slideshow "Echoes of the Past" 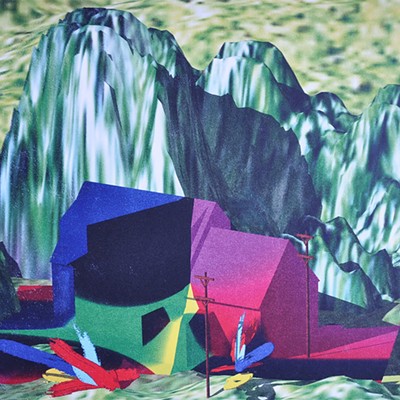 Alan Singer's "After Rockwell Kent," a digital and watercolor transfer print, is a trippy, undulating, vibrant vision of Kent's 1946 lithograph, "Adirondack Cabin." All of the elements are present, from the rolling, foliage-filled hills, to the sharp angles of the homestead and abstractions of the woman and posts in the foreground.

Through pattern and texture, Karen Kunc's 2012 color woodblock, "Glacial Moment," conveys an age of the world-carving effects ice has had on the earth. The strata of frozen peaks and warm-toned terra of Kunc's work are flipped in Barb McPhail's monoprint, "Fire and Ice" — here, the icy world melts into thrashing waves, held in a vignette licked by flames.

Elizabeth Andrews' etching and aquatint, "Summer is Only a Penny" also flips the narrative of its inspiration print, Dorothy Lathrop's 1968 wood engraving "Snow in Summer." Lathrop's work features a snow globe, glowing in the dim scene, with a mouse nibbling on some fruit that rings the globe's base. Andrews has replicated the corner-of-a-table still life in reverse: here, a gumball machine is filled with a beachy scene, surrounded by mittens, sprigs of holly, an ornament, a coin, and wishful thinking.