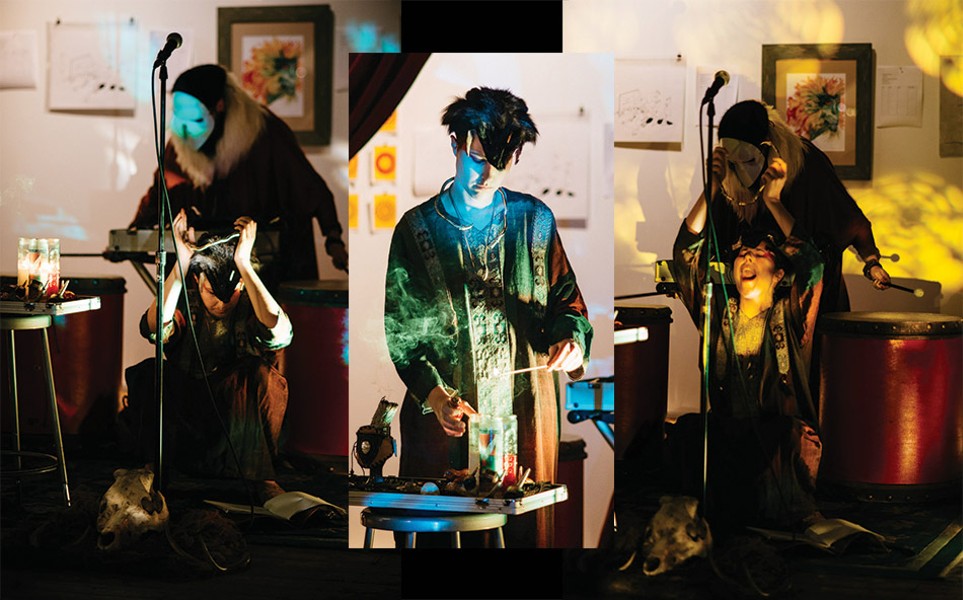 Check out the band during its January residency at The Yards, 50-52 Rochester Public Market

The Velvet Noose is a duo of sublime simplicity masquerading as complexity. It skates the razor between a song's impulse and its actuality.

Alyson Trombulak, the spoken word component of The Velvet Noose, offers beguiling hints at a broader picture over Harold Taddy's soundscape manipulation via a droning MOOG Oscillator. The band conjures wonderment and infinite fascination with the splendor and spectacle of its live show.

It's a quiet, disquieting, blissful chaos. It soothes, and it seethes. Say goodbye to music as you know it; The Velvet Noose will shatter pre-conceived notions about music on the fringe.

Taddy and Trombulak stopped by CITY Newspaper to explain, to confound, and to astound even further. An edited transcript follows.

CITY: How did The Velvet Noose get going?

Harold Taddy: I've been performing in different genres of music over the years. I grew up on punk rock; then eventually started doing acoustic music. A few years ago I was hosting a series of open mics in State College, Pennsylvania, and Alyson would come up and do spoken word while I played acoustic guitar. I started to improvise and play more ambiently. It revealed itself as something that could get intense, and we started taking it more seriously within the last few years.

It isn't something you intentionally pursued?

Alyson Trombulak: It's just been evolving since we realized it was something we could do together; he'd do the music part of it and I'd do the spoken word. It has come together in this really cool way now. It happened on its own; it wasn't something that was planned. Just all of a sudden, we were doing it.

Where did the spoken word come from?

Trombulak: It came from when I was a kid, I had the opportunity to read in front of people and tell stories.

Taddy: I've encouraged her to do more because it's this natural thing.

So the music you make still manages to astound you?

Trombulak: Now we're like the sum is greater than the parts. I can read to myself and he can play music by himself, but us together ... before, I would have never thought of reading a Bukowski poem.

Isn't the spoken word aspect music as well? Does the MOOG give the voice a sort of abstract musicality by proxy?

Trombulak: Being analog, the drones are really alive and take on this personality of their own which colors the spoken word.

How does the creative process begin?

Taddy: I would say with the oscillators. We're really honing it in after 10 shows as The Velvet Noose. The oscillator begins and this soup is created. Alyson's performance is getting more and more theatrical. I wear a mask, and the way we dress and the way we move, it's kind of been snowballing. It's like the horns of an animal you grab ahold to steady it in some way.

How does a droning oscillator fit in?

Taddy: We focus on analog oscillators designed by Bob Moog. That's what we use specifically to create our sound. An oscillator is always on — it's always resonating. Once you amplify the oscillator, you can then manipulate the tone. It's just a raw, unending tone. We've started taking the droning MOOG oscillators more seriously in our personal life; I do it for meditation.

Is there room for improvisation or interpretation?

Taddy: Nothing is pre-set. The sounds are always different in some way.

Trombulak: I might switch and read something else. I get these ideas right in the middle of performing. I know there is this core, this skeleton holding everything together, and we just flesh it out while it's happening.

What are you writing about?

Trombulak: All different things. Some of it is mystical; some of it is about reverence of nature. I pay a lot of attention to how words sound together and how they sound coming out of my mouth.

Taddy: It's not so much that we write about topics as we write about the core of a human trying to resonate. Because with how the sounds are pulsing and throbbing, it's very therapeutic. When I'm writing words for her it harkens to a neutral time — a time that is ancient but a time that exists neutrally to create the awareness of existing basically. Like there's an overarching theme of slowing things down.

Do you encourage your audience to join you at that level?

Taddy: We do. But we don't verbally dictate that. It's almost like it has to happen if you're paying attention. The tones and the words pull you in. It's very much like a ritual — a ritual of patience and endurance. We play non-stop. There are rises and falls in the music. It's more performance art than simply a band playing. It's an immersive experience. It's an invitation to a shared vision.

Which do you prefer: an audience that gets it or one that is confounded by the sound and spectacle?

Taddy: There's an element to it that is quite shocking. It's musical and dreamlike, but there's this great heaving intensity. And Alyson's voice is so commanding. It's so tender and severe and I'll bash on these drums and scream. What makes us unique is the intensity of the theatrics going on. It's an experience.

Do audiences ever miss the point or get you wrong?

Taddy: People think we're communicating with spirits, but it's our release of ourselves. It's primitive humanity exploration.

Trombulak: We're not putting restrictions on the performance, the ritual itself, and hope the audience doesn't either.