June 23, 2020
Comedy Central’s “Indecision” election coverage brand became a staple on the network 20 years ago amid the delayed results and hanging chads of the 2000 presidential election.

Today, the “Indecision” label and the comedy of errors that it evokes could apply to municipalities across New York, where scores of contested primary races went off with more than a few hitches.

Monroe County was no exception.

Primary Day here was so rocky that the commissioners of the county Board of Elections issued a statement about two hours before polls closed that sought to reinforce their commitment to transparency while acknowledging problems.

“Conducting an election is always a challenging process with many variables and moving parts,” the statement read in part. “Today’s primaries and special election were no exception.”

The commissioners noted that the pandemic forced the consolidation of polling locations — the number of which was reduced to 67 from the typical 300 or so — and additional training of poll workers.

“Commissioners and staff conducted site visits throughout the day and immediately addressed any concerns that were reported or observed,” the statement went on. “Isolated incidents of human error were found and corrected.”
The statement did not indicate what those errors were, but the complaints from voters were many. 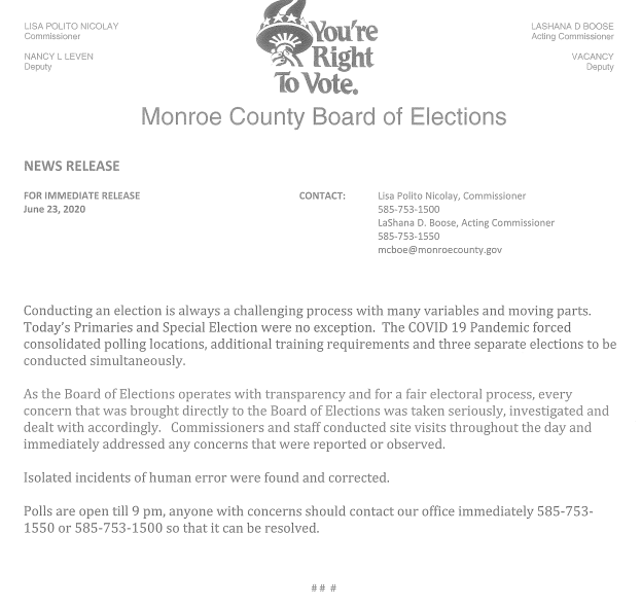 Vincent Stark, of Rochester, said he was the first to arrive at his polling station at the Flint Street Recreation Center and that he left 40 minutes later without having had an opportunity to vote in the Assembly and state Senate races because the ballots were not ready for him.

“There was a lot of confusion,” Stark said. “I voted in the primary for president that I’m not even interested in.”

“I’m on a bicycle,” he went on. “I have things to do today. I had a terrible experience and I did not get to vote.”

CITY fielded complaints about a shortage of Spanish interpreters at some polling stations with high Spanish-speaking populations, and another about an assigned polling station where a sign posted on the door read: “No Voting Here Today.”

The Board of Elections also did not issue its customary updates of voter turnout numbers throughout the day.

Compounding frustrations and heightening the potential for claims of disenfranchisement is the fact that the results of most, if not all, races hangs in the balance awaiting the counting of an avalanche of absentee ballots.

The number of returned absentee ballots for local primary elections as of Tuesday was close to 28,461, according to the board. Those ballots, by law, will remain uncounted until at least June 30, when they are due to the board. They must be postmarked June 23 to be eligible for tallying.

"Democracy was not served today," Assembly member Harry Bronson said. "It is pretty clear that the Board of Elections let our citizens down here in Monroe County. The number and sheer volume of calls we got from voters today, I've never seen that before."

That was the assessment of a candidate who held a significant lead over his opponent as of the close of the polls.

The influx of absentee ballots is not the fault of the Board of Elections. Applications for absentee ballots were mailed to voters at the order of the governor to give people a chance to vote without having to crowd a limited number of polling stations during the pandemic.

Every absentee ballot, though, comes with the potential for error. Unlike regular ballots, absentee voters are required to sign their names to the ballot. The Democrat and Chronicle reported last week that about 6 percent of the returned absentee ballots lacked signatures.

Election Day complaints are not uncommon. But the 2020 Primary Day process here deserves a thorough post-mortem.

Unlike the Comedy Central brand of election coverage, “Indecision 2020” in Monroe County was no laughing matter.