Veterans of the Rochester Fringe Festival will recognize familiar favorites.

The Cristal Palace Spiegeltent returns to the intersection of East Main and Gibbs streets, home to the comedy and dangerous juggling of Cirque du Fringe. Gospel Sunday is back. The Pedestrian Drive-In. Rochester’s Garth Fagan Dance and PUSH Physical Theatre. The intimate Bushwhacked and Dashboard Dramas, with some shows sold out before the Fringe guidebook had even gone to the printer.

And those folks with a slightly longer memory will recognize Bandaloop, back at Rochester Fringe for the first time since 2013. It’s a show built around humans suspended from cables, like spiders swinging from a silk thread, performing what the aerialist ensemble calls “vertical dance movement” on a side of the 21-story Five Star Plaza building downtown.

Bandaloop’s four free shows are set for the final weekend of Rochester Fringe, which opens Tuesday and runs through Sept. 24. After a couple of years of COVID – and many shows that were available not live, but virtually – this 11th year is a cautious return to normalcy. That’s if your idea of normalcy is “One Man’s Trash: A Repurposed Circus,” in which an ensemble of acrobats and clowns digs through dumpsters to create their own playground. 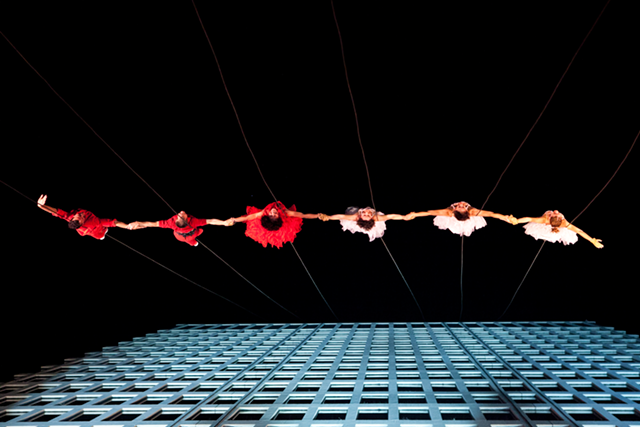 And as usual, Shakespeare is shown no respect, from the gender-fluid “Bardbending” to a favorite of the past few years, “Shotspeare,” an alcohol-drenched reworking of “Romeo and Juliet.”

Familiar sights aside, these dozen days are a voyage of discovery. Sometimes as much for the performers as it is for the audiences.

“Improvised performances have always been a big part of the Fringe, and also the combining of different genres,” says Erica Fee, the festival’s producer and CEO.

With improv, “You are yourself being someone else,” says Joanne Brokaw. “I don’t have to memorize a bunch of lines. And then you let it go.”

For years at the Fringe, Brokaw and Sara Zavacki-Moore ran the Spiegelgarden’s “Ask Us Anything Booth.” This year, both will be a part of “Catharsis Time,” in which a handful of comics and sad sacks confess to embarrassing episodes from their lives. Brokaw also joins Fringe vet Ty Gagnon for “Ty and Joanne Create the World,” another improv event, although considerably more ambitiously named than most.

The key to improv, Brokaw says, is “sharing commonalities.” And in not trying too hard. “You can always tell when partners are trying to be funny, because it’s sucky.”

Sucky, of course, is always a risk with live performance. The 12 days of comedy are positively infested with brave souls who take the stage, uncertain as to what will come out of their mouths. With more than 500 shows at more than 30 venues, dance, music and theater are improv-laden as well.

Some of this stuff cannot be easily pigeonholed. On Parcel 5, The Flying Españas celebrate Rochester’s Hispanic Heritage Month with daredevil feats that mix rock music and motorcycles in cages. “Remnants” is a walk through the history of Ellison Park. “If These Walls Could Speak…” is music, dance and spoken word amid the ruins of the old St. Joseph Church. They’re what’s called “site-specific” performances.

Multidisciplinary is the diverse category at Rochester Fringe. “Fiesta at The International Plaza” is another Hispanic Heritage Month celebration with music, dance and culture. Dancer Thomas Warfield, who once did a show based on his shoe collection, celebrates his 60th birthday with video projections and reflections on his human-rights work.

The interactive shows lend themselves to audience participation. Although the murder mystery, “You Know the Old Slaying,” promises no actual murders. None planned, anyway. These are, as we said, interactive experiences.

It starts with six kilometers of string – that’s 3.728 miles for those of you still using the imperial measuring system – strung up along points in the parking lot at City Blue Imaging on Scio Street. “It’s an incredible show that almost defies description, but I will try,” says Fee, who saw it at Buffalo’s Artpark.

“The string is kind of artistically woven, and at the start of the show, the audience is asked to take an end to that string, and they have to roll that string back into balls,” Fee says. “When you experience the show, you realize how a community can work together. How, also, one member of that community can be particularly helpful, and have a positive effect on the entire community. Or even if just one person in that community is not working with the system, it can have a detrimental effect.”

Fee calls it “serious, yet lighthearted.” With light effects including searchlights and a soundscape that includes audio from a pro-democracy rally, cheers and police making arrests.

“It hits you on many levels, whether it reminds you of pro-Black Lives Matter protests last summer. Or it just reminds you, really, of a community coming together. Or perhaps, even others, actually, who attended at Artpark, they were reminded of World War II,” Fee says. “So it hit people on different levels based on their own experiences. But it was also a very powerful message, I thought, to counteract some of the anti-Asian hate that’s happening now, because it’s showing that these pro-democracy rallies, and the struggle that is happening in Asia, is so connected to the human experience.”

And after the audience has rolled the string into soccer-ball sizes, they’re placed in a pile. And set on fire.

“It’s quite cathartic at the end, I have to say,” Fee says.