PHOTO BY MARK CHAMBERLIN Parent Sarah Johns (right) with her daughters Emily and Lillian and Parents as Advocates instructor Susan Hall. Improving her daughters’ reading skills is one of Johns’ goals.

Brenda Coleman says her son LaBronze, 10, is intelligent and has an impressive vocabulary. And there are times when he is extremely talkative, she says. But Coleman says she has to keep LaBronze on a tight, consistent schedule. Any unusual variations can trigger serious behavioral problems, she says.

When that happens, she says, "this house can get really rough for me." LaBronze was diagnosed with autism about two years ago, Coleman says, and the adjustment has been challenging.

"Dealing with an autistic child is difficult," she says. "They don't give you any eye contact, no expression to tell you what's going on or what's wrong with them. It's really hard, because they can have a temper tantrum at any time."

Coleman also has two daughters. Christina is 7 and Rosalyn is 5.

"My 5-year-old has global delays," Coleman says. "She has difficulty understanding. Her speech and cognitive skills are behind where they should be. And she's receiving help."

But Coleman says there came a time several months ago when she realized she needed help, too. She readily admits to being overwhelmed as a parent. Coleman took the advice of a neighbor who had heard about the Parents as Advocates program and says she decided find out more.

Developing better parenting skills is important, Coleman says. But many parents don't know what kind of support to ask for, she says, or how to express themselves clearly and appropriately.

"My kids have different social skills and learning styles because of their disabilities," she says. "Being an older parent and starting to have my kids very late, it's been hard. When you have a child that doesn't have problems, it's hard enough. But it's 10 times harder when you've got a son that's autistic and a daughter with delays. You have to figure out how to juggle all of this. You need help."

Parents as Advocates is a support program designed to help parents help their children have a positive school experience. The program, still in its pilot stage, is affiliated with the Hillside Family of Agencies.

Started in 2008, Parents as Advocates has many components, but teaching parents how to better communicate with their children's teachers and principals and guiding them toward building productive relationships are recurrent themes. And often, it involves fairly basic concerns like scheduling parent-teacher conferences or improving attendance.

But sometimes the issues that parents face are more complicated. For instance, when a teacher told one couple that their daughter might be held back due to her low reading skills, PAA worked with the parents on how to ask the teacher for feedback on how to improve their daughter's reading.

The program is available at no cost to families who live in the City of Rochester and have a child entering kindergarten through third grade. The program sends state-certified teachers or what they refer to as parent educators to the home to work with parents in a familiar environment. The in-home visits also eliminate problems with transportation and child care.

Coleman is about three months into the program. She says she is concerned that her lack of social skills may prevent her from helping her children get the support they need. She never developed those types of skills, she says. Her parents were older when she was born, she says, and she didn't have a good relationship with her stepmother.

In a recent PAA session, parent educator Susan Hall talked with Coleman about Coleman's interaction with her children's teachers.

"In certain areas, they're good," Coleman says. "But then in others, if you don't speak up for yourself, they [school officials] will throw anything at you. And you end up sitting there wondering 'Now what do I do?'"

Coleman and her husband have been trying to move Rosalyn into a classroom with fewer students because they want her to receive more individualized support.

"With 24 students with just one teacher, she is not going be where she needs to be," Coleman says.

But Coleman says she's especially concerned about her son, LaBronze. She says she's pleased that his teacher and principal have begun to view her as an involved parent. The relationship-building techniques that she has learned from Hall seem to be working, she says.

But LaBronze is still disruptive in class, she says. So Hall has been working with Coleman to find out what social support systems are available outside of school and in the community. Hall says she wants to link Coleman with a group of parents who are sharing similar experiences with their children at home and in school.

Hall says that parents like Coleman are more common than most people realize, and that they often feel isolated.

"When you have kids like this, you can't always talk about it," Coleman says. "People sometimes are uncomfortable, and they may not want to talk about it with you."

But the area where many parents seem to need the most help, Hall says, is communicating with their children's teachers and principals in a constructive way. Hall says working parents or parents who may have a limited education or had a troubled experience in school often feel uneasy speaking up to teachers.

Often teachers don't realize the position of power and authority they're in, Hall says, which can make it difficult for some parents to express their needs. And sometimes teachers make inaccurate assumptions about a parent. 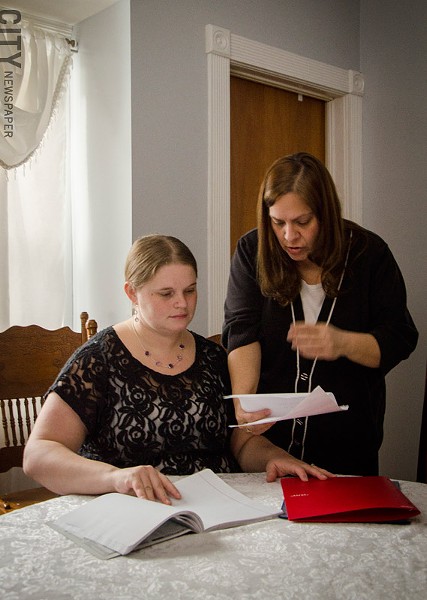 In a session with a different parent, Sarah Johns, Hall stresses the importance of meeting with her daughters' teachers. Sarah and Ian Johns are working parents and their schedules make school meetings difficult.

"We both try to get time off from work, but it's tough because my job is very strict about time off," Sarah Johns says. "Last year, he [Ian] did most of the parent-teacher conferences because I got denied on every one of them."

Their daughters attend different schools, which adds to the scheduling conflicts. Emily is in kindergarten in a city school and Lilian is a first grader in a private school. Hall worked with Sarah Johns on how to ask the schools for more notice about school functions, for example.

Hall also stresses that good communication is mutual. She discusses with Johns some things that the girls' teachers might want to know from the parents. For example, do the children have any food allergies? Do the parents tell the teachers when something unusual happens in the neighborhood that may be upsetting to the girls? Or do the girls have a heightened interest in something that perhaps the teachers could incorporate into a lesson to make it more interesting?

"Let's say it's fishing," Hall says. "If the teacher knows that the girls are really interested in fishing, they can integrate their personal experience into what they're learning. It can be as simple as using little fish magnets or playing a game where the kids fish for letters."

The Johns have progressed well in the PAA program, Hall says. And their interest in their daughters' education and their trust in Hall are evident. They are exactly the engaged parents that city school officials having been saying for years that they need.

"There's more than 50 years of research that shows that students do better in school when their parents are engaged," says Rochester schools Superintendent Bolgen Vargas.

He says he is especially encouraged by programs like PAA because parents are in a sense the district's customers. They should advocate for what they need, he says, and teachers and principals must be more responsive. It's much worse for the district, Vargas says, when parents simply choose an alternative to city schools but give no explanation why.

More than 70 parents and children have gone through the PAA program. While it's too soon to know if the program is successful, it's largely an extension of another Hillside program, Parents as Teachers. And many of the parents who participated in that program requested PAA from Hillside.

Both programs are partly funded by the Community Foundation, says Jennifer Leonard, president and executive director.

Parents as Teachers emphasizes in-home visits, early intervention, and tailored support to the parents' needs. Hillside adopted the Parents as Teachers program in Rochester from a model program in St. Louis. Similar programs exist throughout the US, with many educators and parents swearing to their effectiveness. They say that the programs provide an opportunity for early detection of developmental problems and that they reduce child abuse and neglect.

And despite the cost of programs like Parents as Teachers, supporters say it's dramatically less than the costs to society when children don't graduate from high school and are unprepared for college or work. The program is frequently held up as one of the most productive ways to mitigate childhood poverty in the US.

But not everyone is impressed. A 2002 study by SRI International and Widener University looked at the effectiveness of Parents as Teachers programs with low-income parents and teachers, who are the most frequent participants. The study showed only modest gains in parental knowledge, attitudes, and behaviors. But the study also said that how the program is administered could determine its effectiveness.

And parents must continually practice what they've learned, the study said.

Hillside officials say that the effectiveness of PAT offshoots such as Parents as Advocates has to be viewed over the long term. The ultimate goal is to give parents another form of much-needed support, they say.

Though Rochester is frequently referred to as a city that is "program rich" with dozens of nonprofit, private, and government-sponsored programs to help with the education of city children, the need here is great, says Mary Jo Brach, director of Hillside's Family Resource Centers of Crestwood Children's Center.

"There's not one answer," Brach says. "I think we need a range of options."