ACT Rochester, which tracks the basic well-being of the nine-county Greater Rochester area, released its latest "Community Report Card" this morning. And while the report contains a bit of good news, much of the news in the report is negative. 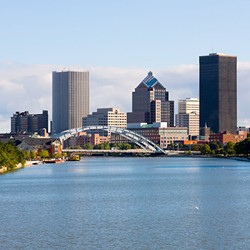 The Rochester region has a very serious problem with poverty and issues related to it. And two things stand out in the report:

None of this is new. This was the seventh report issued by ACT Rochester, which is an initiative of the Rochester Area Community Foundation. The same problems have been reflected in ACT Rochester's previous reports. As Ann Johnson, ACT Rochester's senior director, put it in an interview yesterday, "in general, we don't seem to be moving."

In the years 2012 to 2016, child poverty in the region was 21 percent. That's a touch below the state's rate and about what it was for the nation. But it was higher among children of color. The rate was 14 percent for white children, 41 percent for Hispanics, and 48 percent for African Americans.

And in the City of Rochester, the picture has been even worse: 54 percent of Hispanic children and 53 percent of African American children are poor.

The percentage of families headed by single parents – 39 – is higher than that of the nation, and, not surprisingly, it's higher still in the City of Rochester among people of color: 76 percent for African American families, 61 percent for Hispanic families, 33 percent for whites, 21 percent for Asians.

In the nine-county region, the four-year high-school graduation rate in 2017 – 85 percent – was above that of the state as a whole (82 percent). But in Rochester, it was only 57 percent. That's an increase over previous years, but it's still far too low, and it's yet another warning that many of the city's children face a grim future.

Attendance at arts and cultural attractions has gone up by 25 percent since 2004. Tourism in the region grew 7 percent from 2005 to 2016.

But state funding for the arts has gone down 44 percent since 2001. And the decline has been worse in the 9-county Rochester area than it has statewide.

And of particular concern in light of the region's high poverty rate, donations to the United Way dropped by 25 percent between 2000 and 2016, meaning that there is less available for programs that try to both reduce poverty and help those trapped in it.